The 'It'-girl, model, DJ and designer talks to WWD about her new dress collection, HVN. 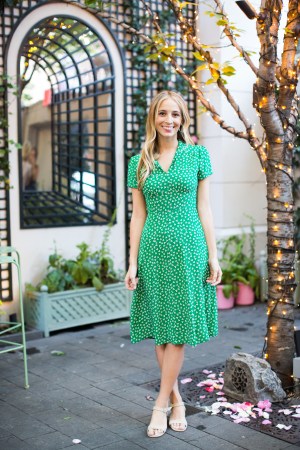 Harley Viera-Newton has added another slash to her résumé. The British-born, Los Angeles-raised, New York-based model/DJ recently launched HVN, a collection of vintage-inspired silk dresses, a project that had been in the works for two years. Decked out in charming cherry, floral and gingham prints — in silhouettes that riff on classic Forties shapes, cut to the knee or below, with cinched waists — the dresses are designed to accentuate womanly hourglass figures (much like Viera-Newton’s own). Though it’s not her first stab at design — she collaborated with Diane von Furstenberg on a line of accessories, DVF Loves HVN, in 2013 — it is her first time working with clothing.

Ranging from $425 to $675, HVN’s debut resort collection will retail at The Webster and Colette this fall, and is currently for sale on Matchesfashion.com as an exclusive. “They’re my favorite stores in the world. I dreamed big. I was very lucky that they responded,” Viera-Newton said. (It doesn’t hurt, either, that a few actresses have already caught the HVN bug: Margot Robbie and Lake Bell have recently been spotted in two of the styles.)

WWD caught up with Viera-Newton in her SoHo loft — along with her cats, Tarzan and Mo — to talk about her latest project.

WWD: Tell me how HVN came about.

Harley Viera-Newton: I’m a huge vintage fanatic. The idea behind the collection is filling in the gaps in my own collection of dresses that I always look for and dreamed about finding but never found. For instance, I’m a sucker for gingham prints. I’d see gingham on a vintage-store rack, and it would be a crazy shape or an insane jumpsuit or something unwearable. I would always hope to find these dresses, and never actually found them, so I realized maybe it was time to give it a go. I had such a clear vision of what I was looking for. My mom was like, “Maybe you should think about making these for yourself. You’re so sure about what you want.”

WWD: The collection definitely has a super-specific look. Talk me through the styles.

H.V.N.: It was actually really easy picking the shapes — there are six styles total. They’re all shapes I love — classic Forties styles — a button-up pajama dress, an easy slipdress. Picking and designing prints was the hardest part. I had someone help me illustrate them, and some of the prints are vintage that I played with and altered. The print part was actually really fun; it was difficult narrowing it down. This is the Tarzan print [motions to the cat-printed dress she’s wearing, inspired by her beloved pet]. I don’t know where Tarzan is right now, but it’s in her honor.

WWD: How did the exclusive launch with Matchesfashion.com come about?

H.V.N.: Matches was in town, doing a press day in a town house down the street. I said, “I’d love to show you guys my new collection,” and luckily they were into it. They thought it would be amazing for summer, so they debuted it as an early launch.

WWD: What’s something you’ve learned during the design process?

H.V.N.: So many New York designer friends of mine have been so emotionally supportive and so helpful. You can pick up the phone and say, “AHHH! This went wrong!” And they’re like, “It’s normal. It’s gonna happen 10 more times. Get used to it.” Having that support system has been amazing. And they’ve also been great with suggestions for factories, or the best places to get buttons. I’ve been really pleasantly surprised. From the outside, you might think it’s a competitive business, but everyone’s been incredibly supportive, excited and helpful.

WWD: What are your ultimate goals for HVN?

H.V.N.: Next season, I’m going to be creating new prints and maybe changing lengths or sleeves, but keeping it pretty controlled and keeping it to dresses for now. I have other ideas, and I get very overexcited about what I can do, but I think it’s important to be focused in the beginning, especially since this is a project I’ve been working on for two years. I’ve had to balance it with other work….And now that I’ve put so much time — and it’s nerdy, but also a passion  — into this project and into perfecting these shapes, I want to see them in other prints and fabrics and expand it later down the line.