Harry Styles is as known for his flamboyant style as he is his music and today, the singer is celebrating both. The former One Direction band member appeared on BBC Radio 1 late last night to promote his new album, opting for a splashy suit and heels for the interview.

Styles chose a white and red tartan suit by Vivienne Westwood with a white button down shirt, leaving the top few buttons undone to expose his cross necklace. He punctuated the look with horsebit heels and a Sharpie marker — the latter of which he used to sign the posters of fans who had lined up outside the studio just to get a glimpse of him. 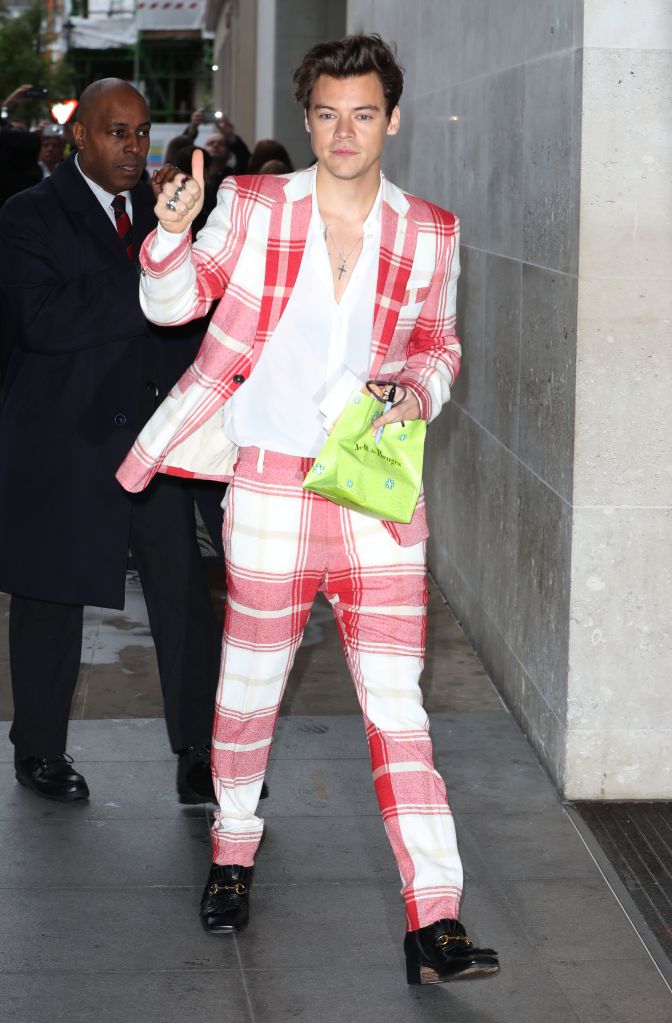 The 23-year-old was promoting his debut solo album, “Harry Styles,” out today. Fans have speculated that some of the lyrics — particularly those in the song “Two Ghosts” — are about ex-girlfriend Taylor Swift. The opening words of the song are “same red lips, same blue eyes,” which some have taken to be a direct reference to Swift.

When asked by BBC Radio 1 to clarify what “Two Ghosts” is actually about, Styles responded with, “I think it’s pretty, like, self-explanatory.” He appeared slightly uncomfortable and jokingly called for someone named Jeffrey to help him out. After some more prodding, he gave the following, rather profound answer: “Sometimes things change and you can do all the same things, and sometimes, it’s just different, you know?”

Styles has been opting for suits and patterned button-downs while making the rounds for his new album. He chose a bright pink suit for his performance on “Today” earlier this week and has been spotted wearing designs by Gucci, Alexander McQueen and Haider Ackermann as of late.