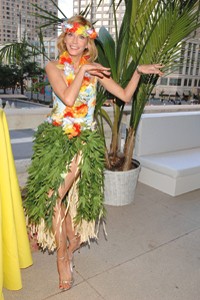 New York — Shorts are not the usual attire for a Manhattan social event, but the Hawaiian theme at the New York City Ballet’s annual Dance with the Dancers Monday night inspired all sorts of comstumery — advised or otherwise. Pareos, flip-flops, seersucker suits and grass skirts suddenly seemed de rigueur, and anyone in a more staid frock seemed woefully underdressed. Luckily, staffers lei-d anything that would stand still — including Domenico De Sole and Emanuele Della Valle — while bathing-suited “lifeguards” watched over cocktail hour, lest any revelers dive too deeply into their Blue Lagoon drinks.

“I think we went a little overboard with our costumes,” laughed Candace Bushnell, wearing a risqué grass skirt and tank-top combo; husband Charles Askegard was dressed in his version of a buccaneer’s costume — complete with coconut bikini top and wig. Co-chair Alexandra Kimball, visiting from her new home in Minneapolis, was more demure in a Derek Lam dress.

The dancers themselves, who performed a skit in the middle of dinner, wore everything from pineapple costumes to skimpy bikinis, much to the delight of onlookers.

Afterward, Allison Sarofim regaled friends with tales of her upcoming role as an Upper East Side mother in “The Nanny Diaries.” “They wanted me to wear a leopard-print dress — for a walk in the park,” she said, describing her scene opposite Scarlett Johansson, no less. “I told them no one would wear that, so the next day, I got a call from the costume department. They said, ‘Wear your own clothes. We think you know best.'”

The next night, it was more Tokyo-meets-Las Vegas when MAC Cosmetics and Maggie Rizer teamed up to host the Viva Glam Casino Night at Skylight Studios in Manhattan. There was a gaggle of models in geisha outfits and guests China Chow, Jamie-Lynn Sigler and Zac Posen gambled their money to win prizes, or lose for the benefit of the Design Industries Foundation Fighting AIDS. “We’re off to get a drink and then we plan on hitting the blackjack table really aggressively,” said Fabiola Beracasa, who arrived on the arm of Narciso Rodriguez. In the background, a DJ was playing Arcade Fire’s cover of the Talking Heads song “This Must Be the Place.” But David Byrne, who was mingling in the crowd, said he hadn’t noticed. “Once they’re done being recorded, I don’t even recognize them,” he said. Standing by the bar, Rizer said she was pleased to provide assistance for a cause that’s so personal (her father died of AIDS when she was a child), but said she had no intention of rolling the dice herself. “I have to say, I’m sort of against gambling these days.”