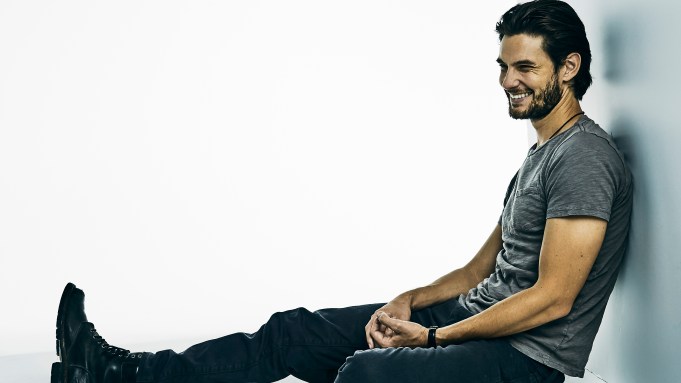 It’s typical for a blockbuster show from a major network to go through much hype and tease — HBO’s “Westworld” has had its share and then some. The series bowed last night three years after the pilot was ordered and a full year after the initial trailer was shown. The Western, futurist epic from JJ Abrams is a remake of the 1973 Michael Crichton film that is set in a theme park gone awry. The series, which stars Anthony Hopkins, Thandie Newton, James Marsden, Evan Rachel Wood, Ed Harris, Tessa Thompson and British actor Ben Barnes, has drawn comparisons to “Game of Thrones’ and critical favor so far.

Barnes, 35, is known for roles in “The Chronicles of Narnia” films and opposite Amanda Seyfried in romantic comedy “The Big Wedding;” he doubles as a Ferragamo fragrance model, just for good measure.

We chatted with Barnes ahead of the Sunday night premiere on how he ended up playing so many American roles, acting in jeans and T-shirts and his favorite bad TV to binge-watch.

On getting cast as Logan, another American character for the British actor:

Ben Barnes: I found myself playing more and more Americans — I don’t think I’ve played a Brit in years, I’ve kind of been just playing Americans. I’ve always loved doing accents and things. My first film ever was playing a Russian and I haven’t really looked back, in terms of accents — I’ve only played a Brit about four or five times ever in my life which is slightly odd because I haven’t sort of been gunning for that if you [will]. I thought I’d be in the sort of Hugh Grant casting bracket, but it seems to have taken a bit of a turn.

On first receiving the “Westworld” script:

B.B.: You spend so much of your time reading scripts and trying to decipher what you think would be a story worth telling, and obviously when you start out you don’t really have a choice, you just have to say yes to everything and it’s always complete crap. But as you progress, more choices will make themselves available to you and then eventually you end up in the position where when a script comes across your kitchen table and you can recognize it as something magical.

On his first reaction to the plot:

B.B.: At the time when they were casting the pilot episode, nobody knew anything about it at all and there was sort of rumblings about “maybe it’s set in the future, and maybe there’re cowboys and maybe you’re robot,” and it absolutely just sounded mad. It was something that I thought, “Oh, that’s a cool new show on HBO, I’m definitely going to watch every episode the day it comes out.”

On signing up for a TV show versus a film:

B.B.: I’m the opposite of those people who are like, “I don’t have a television.” I’m the person who is very happy to say I have binged five episodes of something and call that an evening and not feel shameful about it.

On the intimidation of doing TV:

B.B.: I haven’t ever done any television before I always knew what the beginning, middle and end of the story was and what the full character was before. So this is a bit unnerving, feeling like I knew where the character began but nothing else. It was kind of exciting because it felt like you were watching the sort of big [thing] — you know, I’ve never read something with more incredible plots and twists and turns and surprises in my life, and we would wait for these scripts to come out on our biweekly or monthly basis, and then you sit and read them and you’ll start buzzing with texts like, “Oh my god did you read that!”

On the genre of futurism and Westerns:

B.B.: I’ve done a lot of fantasy and period stuff in my life, so the notion to me working in jeans and a T-shirt is fascinating. I’ve never been involved in something so layered, so convincingly thought out.

On his favorite bad TV:

B.B.: I have no problem watching bad TV, as long as it has it’s tongue slightly in cheek in terms of making something that’s supposed to be fun. When something that’s crappy pretends to be high brow, it upsets me. I like — it’s not really rubbish — but I like to watch things where you don’t have to engage your brain, like “The Great British Bake Off” or reality, anything with a competitive edge.

It’s crazy to me how television and society have trained our brains to invest —  you can watch something you don’t watch on a regular basis, like one of the singing competitions, you can watch it for 10 minutes and immediately be engaged with someone you’ve never met from Iowa who’s trying to get over an obstacle course or map their way through a Lauryn Hill song, and you’re on their side immediately. And I sit there having an existential crisis about a society that’s made me invest in this person that I don’t know — I’m sure other people don’t watch it in the same way.