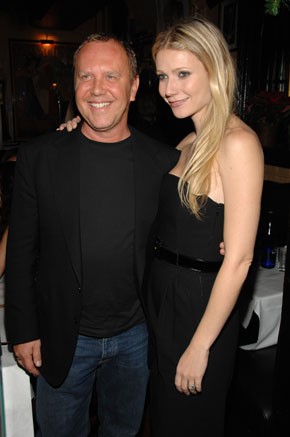 “I get the bends if I go below 57th Street,” Muffie Potter Aston joked. She, like many others, took the opportunity to do a little shopping.

(The space—once Jerry’s diner—has been transformed from greasy spoon to a bright-white showcase for Kors’ glitzy metallic handbags, shoes and watches).

Natasha Richardson, whose husband Liam Neeson was at the “There Will be Blood” premiere, admired the watches on display before trying on some sunglasses. The only thing she didn’t need was jewelry: the actress was sporting a giant cocktail ring, albeit sans bodyguard. “It’s trash flash,”she said of her faux bauble. “I was Christmas shopping today at Henri Bendel and I got something for myself.”

After a few cocktails, everyone walked over to SoHo standby Raoul’s for steak frites and profiteroles.

Brooke Shields and Jane Krakowski filled in the rest of the celeb quotient, flanking Kors at the eatery’s central table. Meanwhile, old friend Gwyneth Paltrow (who met Kors back in 1999 when he was still at Celine) made a grand entrance halfway through the meal.

“This is like Swifty’s for downtown,” said Kors. Clearly, the Upper East Side contingent agreed—they were cozy enough to stick around gossiping long after the meal had ended.