Attendees at the New York City Ballet's Dance with the Dancers event grappled with the heat and the ambiguous dress code of "Cannes Chic." 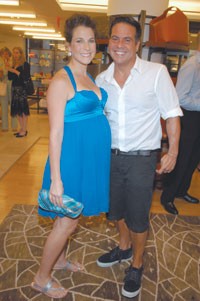 NEW YORK — As if the steamy weather weren’t enough, attendees of the annual New York City Ballet’s “Dance With the Dancers” event on Monday night also grappled with the rather ambiguous dress code of “Cannes Chic.”

A few cocktail goers braved the sauna on the Terrace of the Promenade of the New York State Theater, but others, such as co-chairs Robin Renzi and Rita Norona Schrager and Tatum O’Neal, kept to the cooler interior. Despite the balmy temps, it seemed not everyone was in vacation mode. “I’m reopening my store in the Hamptons right now, so I’m going back and forth,” said an exhausted Nina Griscom of her frenzied commute. After dinner, many guests moved to the Promenade’s balconies to get a bird’s-eye view of City Ballet’s Melissa Barak‘s specially choreographed performance before taking to the floor themselves. Three of the ballet dancers wore spring collection outfits by Chloe, the night’s sponsor.

The next night, in Barneys New York’s Chelsea Passage, dresses of a different sort were on display as some of New York’s chicest mummies turned out to support Baby Buggy, one of Jessica Seinfeld‘s pet charities. Seinfeld herself, due in August, was in a blue Proenza Schouler dress designed specially for her. “I wear a lot of Proenza and Marni, now that I’m pregnant,” she said. Just don’t ask her how she’s handling the heat. “I hate talking about the weather. There is nothing more uninteresting than talking about the weather.”

Others, such as Blair Husain, Marjorie Raein and Heather Mnuchin, appeared to agree, being more interested in discussing their children.

Not everyone had kids on the brain, though. On the way out, Jacquetta Wheeler offered her Johnson & Johnson-laden gift bag to Marisa Noel Brown, exclaiming, “Do you want mine? What do I want with diaper rash cream?”

The previous week, in an unconventional pairing of a masculine icon and fashion, Nathalie Kaplan and Lydia Fenet hosted a ladies’ lunch at Christie’s. Celerie Kemble, Lauren duPont and Zani Gugelmann were among those who gathered to preview Akris’ fall collection and get a sneak peak at the personal property of Marlon Brando — which is being auctioned on June 30 and includes personal effects such as annotated scripts, letters and film memorabilia. But it was the fashion that really had an impact.

“I’m a changed woman,” enthused Kaplan of her new striped and strapless Akris frock. “Everyone is like, ‘What happened, Nathalie?’ So I’ve decided that it’s the clothes that make the woman and not the woman who makes the clothes.”