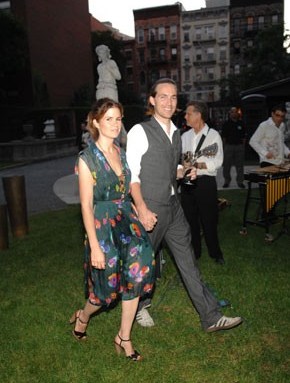 In the middle of a steamy and bustling Manhattan, Bulgari threw a relaxed garden party at the Elizabeth Street Gallery Wednesday night to introduce its Jasmin Noir fragrance. As a peppy jazz trio played and the scent of fresh gardenias wafted threw the air, guests including Anne Dexter Jones, Allison Sarofim, Eva Lorenzotti, Lisa Airan and Bettina Zilkha discussed summer plans. (Apparently Saint Tropez is still the gold standard and anyone who’s anyone will be there in late July and early August.)

But Ariana Huffington, who was hopping a plane back to Los Angeles the next morning, couldn’t shake off work, asking various partygoers to be guest bloggers on the Huffington Post.