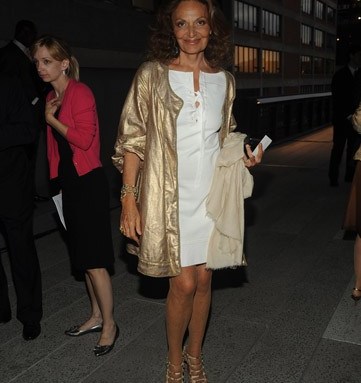 Monday night, a group of VIPs clambered up a staircase on Washington Street in New York and became the very first “human humans,” as Barry Diller said, to see the new park on the elevated rail tracks dubbed the High Line. So precious was the glimpse that city officials forbade photography in advance of the official June 15 opening, though the evening’s hostess, Diane von Furstenberg, snuck a few shots for her own use. She did earn it: The designer and Diller revealed a $10 million donation to Friends of the High Line.

“It’s like a dream and all of a sudden it’s real,” said von Furstenberg, who met FHL co-founders Joshua David and Robert Hammond through neighborhood fixture Florent Morellet. “We had so little chance to make this happen.”

It happened, and despite some rubble and orange tape, the new park was quite civilized. A string trio serenaded guests, including Ralph and Ricky Lauren, Oscar and Annette de la Renta, Harvey Weinstein and Donna Karan, as waiters passed Champagne and mini crab cakes. Between the mirrored cocktail tables and the permanent wooden chaise lounges, one might think it was the patio of a luxe hotel — say, the Standard next door, where curious drinkers checked out the action (and the celebs, like Marion Cotillard, Diane Sawyer, Barbara Walters, Candace Bergen and Susan Sarandon and Tim Robbins). Even the sun set on cue.

“It’s so gorgeous,” said Jerry Seinfeld to wife Jessica. “You gotta come check it out.”

The dinner afterward (produced pro bono by Bronson Van Wyck) featured more standing ovations than an opera, applauding the impending opening. In the midst of all the speechifying, Lisa Marie Falcone grabbed the mic to announce that she and her hedge funder husband, Philip, had spontaneously decided to donate $10 million, too. That got another standing “O,” before Diller took the floor.

“Imagine all the romance and the flirts that will happen here,” the mogul said, as von Furstenberg whispered in his ear. “Oh, and from Diane — all the cruising.

“Well, this park will close at 10 p.m. because the parks commissioner says nothing good happens in parks after [that],” Diller continued. “Little do they know.”