Downtown New York got a taste of casino culture Wednesday night when the Cinema Society and Calvin Klein Jeans hosted a special screening of "21." 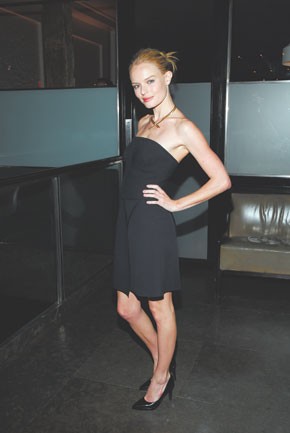 Downtown New York got a taste of casino culture Wednesday night when the Cinema Society and Calvin Klein Jeans hosted a special screening of “21.” Based on a true story, the film has Kate Bosworth and Jim Sturgess as MIT students who use their smarts to make major dough at the Vegas blackjack tables. As curious onlookers crammed the streets outside the IFC Center, Bosworth (who also fronts the house’s spring ad campaign) admitted to having mastered a pretty good poker face. “I think you need one to be in this industry,” she said. “But in my personal life I wear my heart on my sleeve.”

A few feet away, her co-star Sturgess, despite his hours of training for the film, had no plans to do any gambling at the Mercer Kitchen after party where blackjack tables were set up. “I have no skills,” he insisted.

Indeed, Sturgess avoided the cards, holing up in a banquette with friends as Mary-Kate Olsen, Clive Owen, Mamie Gummer and Elle Macpherson made the rounds fueled by Champagne, mini burgers and fries. The B-52’s Fred Schneider was less restrained as he headed straight for the tables. “I’m off to Vegas next week so I guess I better start practicing,” he explained.

Meanwhile, at Helena Christensen’s West Village store Butik, the model was entertaining friends including Damon Dash, Amy Sacco and Alexandra Richards for the launch of Tocca Vintage, the line she once collaborated on. Despite the chill, the Dane donned one of the teeny-tiny white sundresses and held court in lawn chairs set up on Hudson Street.

The previous evening on the West Coast, Bulgari sponsored a private, power-packed affair at the home of MGM head Harry Sloan and wife Florence in honor of American Ballet Theatre’s engagement of “Swan Lake” at Los Angeles’ Dorothy Chandler Pavilion. Guests like power producer Paula Wagner and her husband, CAA honcho Rick Nicita, ABT board members Mario and Anne Grauso, Barbara Guggenheim and Bert Fields and Katherine Ross chatted at tables under an ornate tent, erected above the Sloans’ swimming pool.

“It’s hard to tell who is from New York and who is from Los Angeles these days,” observed Michael Govan. (The fact the Grausos are now house-shopping in L.A. only added to the confusion.) Conversation topics ranged from Michael Ovitz to Jeff Koons, but the major sparklers on display were never far from anyone’s thoughts. After Bulgari USA chief François Kress told the group, “If you see anything you like, come talk to me afterward, and we can work something out,” Wendy Goldberg helped Paula Redstone fasten one of the immense pieces around her neck. Redstone turned to her husband, Sumner, and declared, “I really like this.”