If the New York charity circuit is like a sports league — and for many it is — then the Museum of the City of New York made a bid for MVP status... 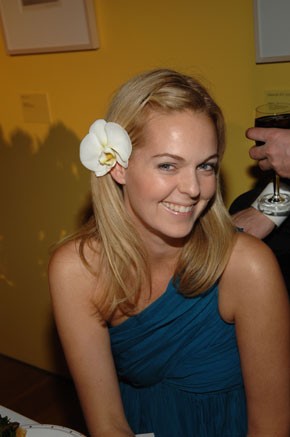 If the New York charity circuit is like a sports league — and for many it is — then the Museum of the City of New York made a bid for MVP status Wednesday night at its annual Winter Ball, this year sponsored by Dior.

“I have one word for you: Loyalty,” declared Muffie Potter Aston. “I come every year because of my friends [chairs] Mark Gilbertson and Cynthia Lufkin.”

Jamee Gregory also expressed a personal link to the institution.

“My grandfather’s toy collection is here so this is the museum I feel most attached to,” she explained. “In fact, I’m going to see if any of them are on display and go yell at the director if they’re not.”

Cocktails were held in a tented space in front of the museum’s entrance, flanked on either end by giant photographs of vintage Dior dresses and plasma screens with show footage, encased in Louis XVI-esque frames reminiscent of the house’s Parisian store d?cor.

Native New Yorker Eva Amurri, who brought along friend and designer Chris Benz, was attending the annual gala for the first time. But she’d already had some experience with the brand.

“I wore my first Dior when I was 16 for the Vanity Fair Oscar party,” she recalled. “I think it was actually sent for my mom and I said, ‘Oh, I’ll take that!'”

Indeed when dinner followed at white orchid-bedecked tables on the museum’s first and second floor, Amurri, Benz and fellow youngsters like Erin Fetherston and Brian Reyes injected a much needed dose of relief from the typical conversation at such events. Amurri showed off her Latin script tattoo to her tablemates, while Reyes basked in the glow of being surrounded by women.

“I like women more than men,” he said, hastily adding, “I mean I LIKE men, but I prefer being around women.”