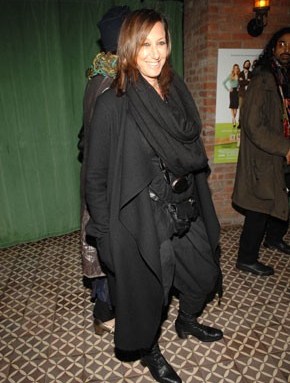 There were signs of intelligent life on the Lower East Side Monday night when the Cinema Society and Linda Wells hosted a special screening of “Smart People” at the Landmark Sunshine Theater. As its title suggests, the film shows a slew of brainy folks including a Carnegie Mellon professor (Dennis Quaid) and his ne’er do well brother (Thomas Haden Church) partaking in some less than genius antics. The movie’s stars, however, were on their best behavior as they worked the red carpet.

Ellen Page, who plays Quaid’s super Type A daughter, generously attributed high IQ points to just about everyone. “I think people are so smart in their own ways,” she offered, when asked whose intelligence had most impressed her. Sarah Jessica Parker, Quaid’s onscreen love interest, was a little more specific.

“My mother and Matthew’s mom,” she said of her nominations.

Post-screening, Parker and hubbie Matthew Broderick headed over to the Bowery Hotel where they stowed away in a bar corner with breadsticks and drinks, while guests like Ellen Barkin, Eva Amurri, Jane Fonda, Jessica Seinfeld, Rocco Dispirito, Isla Fisher and Cynthia Nixon milled around.

Quaid, surrounded by his teenage son and other family members, was certainly the most modest of the bunch. “I’m not really all that smart,” he said. “I just play one in the film.”