Iman will be honored by the CFDA for being a Fashion Icon on June 7. Last Thursday, the supermodel got a head start on the celebrations. 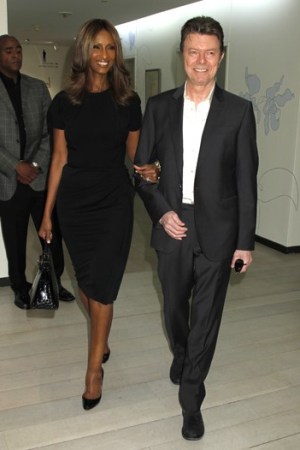 On June 7, Iman will be honored by the CFDA for being a fashion icon. Last week, the supermodel got a head start on the celebrations with a luncheon at Barneys New York.

Iman’s husband, David Bowie, was not at all surprised when he heard his wife was being recognized for her style. “I think she’s always retained her sense of elegance, whatever she wears. That’s been the continuity through everything,” said the musician, who, if he remembers correctly, thinks his wife was wearing Thierry Mugler when they first met.

Iman, however, was shocked when she got the call from CFDA president Diane von Furstenberg. “I didn’t even know [the award] existed,” she said. “Diane said, ‘Darling, we’re honoring you this year.’ And I said, ‘For what?’”

The what was clear when Iman, who turns 55 in July, trotted up to the sixth floor dressed in custom Victoria Beckham.


WWD: How do you feel about being recognized as a style icon?

Iman: I’d rather have that than be, like, Us Weekly’s best dressed. You know what I mean? No disrespect to Us Weekly.

WWD: Have you found over the years that there are certain silhouettes or colors that look best on you?

Iman: Funny enough, it’s always been black. But now since the culture is so celebrity obsessed, there are always photographs regardless of where you go, and color works better. But in New York, camel is a color to us.

WWD: Do you think your style has changed over the years?

Iman: When I was modeling, you have to wear whatever they ask you to. When I stopped, I started wearing silhouettes that really work for me. I love palazzo pants, dresses that are feminine and all that. I saw this in Victoria Beckham’s collection, and I knew sample size is like 0, and I said, “I would love to wear that to my luncheon, but I’m sure I won’t be able to fit.” They said, “We’re sending somebody over to take your measurements.” In two days, it was done. That’s a girl who knows her business. She’s very good.


WWD: Who is your style icon?

Iman: Well, always the one that everybody quotes is Audrey Hepburn, and I met her. She was young and gracious. I mean, the reason she looks like that is because she is innately gracious. So I gravitate toward that [look], but more sexy.