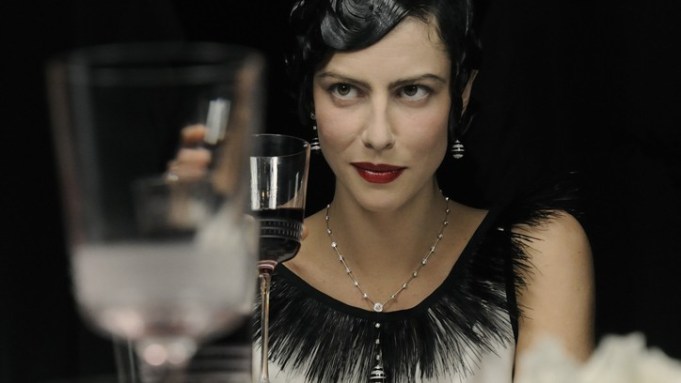 If it seems anyone would be keen on Anna Mouglalis portraying Coco Chanel, it would be Karl Lagerfeld. After all, he was the one who plucked the French actress from near obscurity eight years ago and cast her as the spokesmodel for the very house that Chanel built.

But that’s not the case with Mouglalis’ turn in “Coco Chanel & Igor Stravinsky,” the latest biopic about the iconic designer, in theaters now. “For Karl, it was not his vision at all of Chanel,” says the starlet in her husky French accent. “Not at all.”

The film certainly isn’t the most flattering look at Lagerfeld’s predecessor: Based on the novel of the same name by Chris Greenhalgh and directed by Jan Kounen, “Coco Chanel & Igor Stravinsky” focuses on a sad (and somewhat fictionalized) chapter in the couturier’s life — her ill-fated 1920 love affair with revolutionary composer Igor Stravinsky, then married with four children. “It’s a lot for someone who [Lagerfeld remembers] as full of humor to be shown as cold and dark,” says Mouglalis.

According to Lagerfeld, the project is beneath his beloved spokesmodel. “[Anna] followed all the instructions from her director for this ‘character,’” he says. “But this role has no relation to her talent for other roles.” (Although, it seems Lagerfeld can’t be too miffed — he contributed costumes to the film and also allowed shooting in the Chanel salon.)

Whatever the case, Mouglalis, 32, doesn’t have any regrets. “[Chanel] was one thing and then the opposite the next,” she says. “As an actress, that’s so interesting to embody.

“She is recognized as a huge feminist, but most of the things she did, she did for herself and not for women in general,” continues Mouglalis, noting the designer was a notoriously difficult boss to her all-women staff. “I would even push it further, thinking she was more of a misogynist than a feminist, since she only had male friends.”

A bold statement, though Mouglalis is hardly the only actress as of late to have taken her interpretation of the designer to the big screen (see sidebar). Most notably, fellow French leading lady Audrey Tautou did so in last year’s “Coco Avant Chanel.” (Yes, Mouglalis saw the film, though she maintains that she can’t evaluate Tautou’s rival performance: “It was really my part I was watching,” she says. “So I couldn’t be detached.”)

Mouglalis believes the same can be said for Lagerfeld’s take on her own portrayal. “He’s a real specialist [when it comes to Chanel],” she says. “So it’s as though you were to do a movie on a journalist and you were to show it to another journalist. He would [probably] think it’s not good.”

Of course, Mouglalis is somewhat of a Chanel specialist herself, thanks to the years spent modeling for the company the designer founded. “In the house of Chanel, there’s always a link to Gabrielle Chanel, so I’ve been gathering information for years,” says Mouglalis. “I took naps on the same couch that she took naps on. We probably had the same dreams.”

Though director Kounen says that connection didn’t help her get the part. Instead, she caught his eye when he saw her in the critically acclaimed indie flick “I Always Wanted to Be a Gangster” in which she portrayed a waitress at a truck stop. “Anna hypnotizes you like Kaa the snake in ‘The Jungle Book,’” he says. “It’s done by the rhythm of her movements and the sensual tone of her voice.”

Still, Mouglalis remains loyal to the label where she got her big break. “Chanel is one of the only fashion houses that doesn’t exploit women,” she says, adding that, for its founder, “eroticism was the little piece of skin between the glove and the sleeve.”

It’s why she agreed to take on the role of Chanel again, for a short film that appeared on the company’s Web site. “This way, Karl and I could share the same Chanel,” she says.