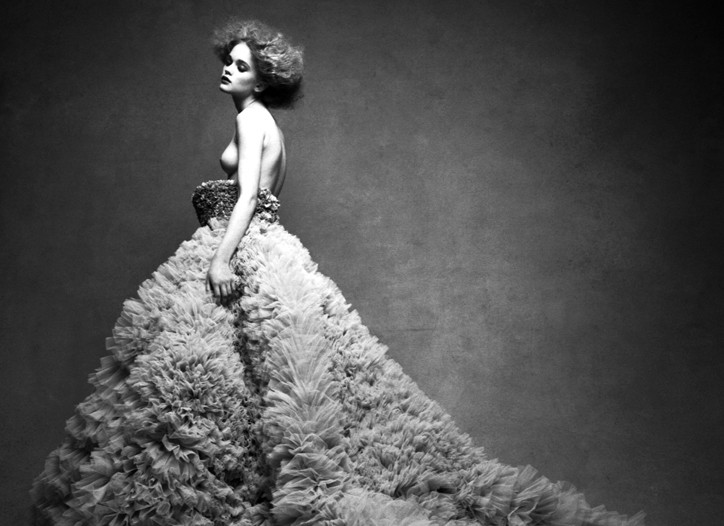 It’s hard to argue with Victor Demarchelier’s decision to become a photographer. As the son of famed fashion photographer Patrick Demarchelier, the younger Demarchelier practically grew up on photo shoots for Harper’s Bazaar and Vogue and has easy access to his dad’s darkroom. What’s more, Demarchelier always has a willing subject at his disposal in model Caroline Trentini, his girlfriend of three years. “It’s all definitely convenient,” admits the 25-year-old, who, at 6-foot-3 with piercing blue eyes, looks more like he should be in front of the camera than behind it.

Demarchelier’s first solo New York show opens today at Clic Gallery in SoHo. Titled “Creating Images,” the exhibit features 20 works taken by Demarchelier over the past several years. While he says there isn’t a theme among the pieces, most are black-and-white prints of subjects dear to the photographer. “It’s very personal,” explains Demarchelier of the shots, which range from a childhood teddy bear to a topless Trentini.

“There are a lot of young photographers out there who are trying to do shocking things and digital things,” says Clic owner Christiane Celle, founder of Calypso and a Demarchelier family friend. “[But] Victor’s work is classic. He knows where he is going [as an artist].”

Demarchelier didn’t always have that kind of direction. “I used to get cameras and stuff for Christmas, but I never thought I would be a photographer,” says the shutterbug, who grew up in New York City and attended Lycée Français on the Upper East Side. Though he remembers accompanying his dad on shoots in St. Barth’s, “I never wanted to be one of those people who just did what their parents do.”

But after graduating from Vassar with a degree in economics, “I quickly realized I didn’t want to work at a bank.”

Instead, Demarchelier, who also studied fine art in college, began selling photographic prints to friends. “I was running a little gallery out of my house,” he recalls. Three years later, Demarchelier’s side job has become a full-fledged career, for which he juggles editorial gigs for magazines like French Vogue and Interview with his still-life work. “I love both,” he says. “It’s that balance that’s what is so nice.”

What’s also nice is that Demarchelier doesn’t have to look far for career advice. For one, he has Trentini. “I’ll tell her about a shot before we go to the studio and then two out of three times she says ‘No,’” he says. Not surprisingly, Demarchelier also often relies on his dad for direction. “Some people don’t want to tell you if it’s ugly but he will because he is my father,” he says.

That said, when it comes to discussing his son’s work, the elder Demarchelier sounds more like a proud papa than a harsh critic. “I really appreciate Victor’s work. He’s very precise, very clear and he organizes his work very well,” says Demarchelier père. “He’s an incredibly talented photographer.”

Of course, the younger Demarchelier is aware that following in the footsteps of a famous parent is a double-edged sword. “It’s unavoidable,” he says of the comparisons to his father. But then he adds optimistically, “You just have to do your own thing and grow out of it and after a while hope people will grow out of it, too.”