Documentary filmmakers P. David Ebersole and Todd Hughes didn’t set out to make a film about their idol, Pierre Cardin — they just wanted to get a photo with him for Facebook. The directors were in Paris three years ago for the premiere of their film “Mansfield 66/77,” and had been tipped off that they might be able to meet Cardin by visiting his flagship boutique on Rue Saint-Honoré on a Tuesday morning, when he often does a walk-through of the store.

They’d only discovered that Cardin was alive and a real person a few years before that. “We thought of him in the same breath as Betty Crocker. It’s a mythical name,” says Ebersole, sitting next to Hughes in their Palm Springs home. Both don a new Pierre Cardin tie design for film press. (“We have six or seven of them now. They’re very expensive, we should not have that many of them, but we can’t resist,” the pair says.)

“We planned it so that we arrived [in Paris] on a Monday night, and got ourselves all dressed up to try and go meet our hero, Mr. Cardin,” Ebersole continues. (The men wore Mr. Turk for the occasion.) They showed up at 10 a.m. the next morning and began meeting the different characters who would end up in “House of Cardin”: the designer’s great-nephew Rodrigo Basilicati and muse and head of couture Maryse Gaspard.

“As we were telling them who we were, I think a little ‘Lost in Translation’ happened, where they began to think we were documentary filmmakers asking whether or not we could make a film about Mr. Cardin,” Ebersole says.

Basilicati took their phone number and said he’d check if his uncle was available to meet them, and the director pair went to have lunch next door at Maxim’s. They got word that Cardin wanted to meet them, and they afterward joined the designer for coffee. “And because we were sort of prepared, I put [photos] of all of the things that we own of Pierre Cardin on my phone. I had this sort of photo essay, and I was showing him what big fans we were.”

The directors met Cori Coppola during that same trip, who came onboard as their producer, as well as Jp Masclet, who offered the directors his Paris apartment while they were in town filming. Although the directors didn’t know many of the details of Cardin’s background at the outset, they were familiar with many of his imprints — the record label, the clothing, the hand he lent to the AMC Javelin design.

Riffing on their initial surprise that the designer was still alive and working, the documentary opens with a central question set up through a montage of archival imagery and interview clips: Who is Pierre Cardin?

“We realized, as people who grew up knowing his name, we really didn’t know anything about him. His more flashy counterpoints, like Karl Lagerfeld or [Yves] Saint Laurent, they put themselves out there as personalities. And Pierre, we didn’t know what he looked like when we began to get involved in the doc. We wanted to bring him alive for an audience: Who is this man? What are his passions? What does he look like even?” Ebersole says.

In addition to interviews and vérité footage with Cardin, the directors rounded up interviews with an impressive cast of characters from Cardin’s life. Naomi Campbell was their first celebrity “yes”; Sharon Stone, Dionne Warwick and Alice Cooper are also featured, as are Cardin’s protégés Jean Paul Gaultier and Philippe Starck. (Farah Pahlavi, the former first lady of Iran, declined. “She said, ‘I would love to do the film, but I can’t because of who I am,'” Ebersole says.)

No topics were off limits, although the private designer grew more willing to share certain aspects of his life as he came to know and trust the directors over the course of a year. One of those topics was Andre Oliver. “We were trying to figure out how to bring Andre Oliver more alive for people, and then Pierre sent us this great footage,” Ebersole says.

Adds Hughes, “Toward the end he sent us a little package of videos and one of them had footage of Andre Oliver, who was his great love, so that was really helpful.

Two years after that first fateful meeting with Cardin, the directors premiered “House of Cardin” at the Venice Film Festival, with the designer sitting in the audience. The 98-year-old Cardin had already screened a cut of the film, at Maxim’s, and loved it.

For all parties involved, the experience of filming “House of Cardin” was life changing.

“People would come up to us over the course of the last couple of years in France and be like, ‘Oh, [Cardin’s] perked up since you guys came around,'” Hughes says. “He has a new lease on life.”

The film will be released theatrically on Aug. 28, and on-demand on Sept. 15 to coincide with fashion week. 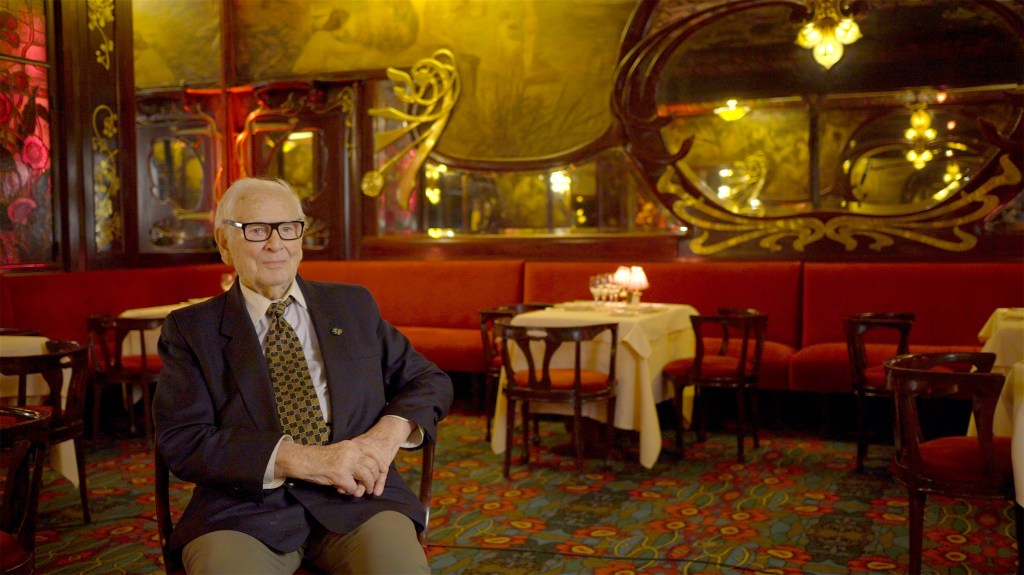