Fernando Kabigting went from making handbags for the fashion house to striking out on his own — as a floral designer for his brand FDK Florals. 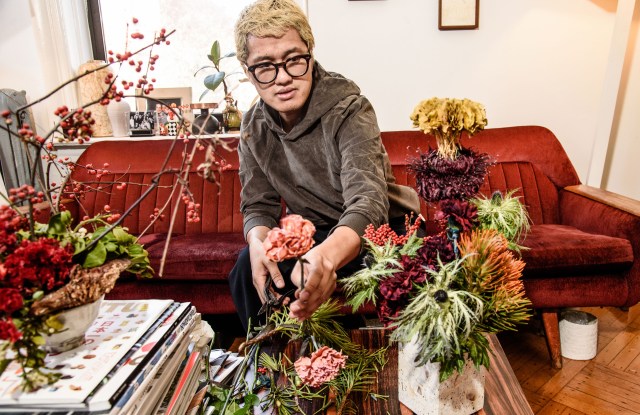 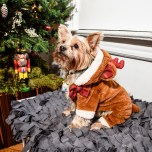 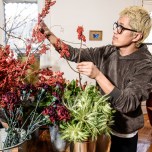 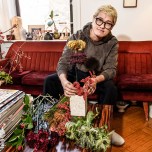 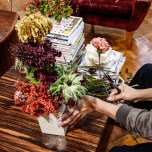 In the Japanese worldview called wabi-sabi, the arts are marked by asymmetry and imperfection. Wabi-sabi is rooted in Buddhist teachings of suffering and impermanence, which are then applied to poetry, pottery, design or floral arrangement. One such art is named ikebana — it’s a style of floral design upon which the Brooklyn florist Fernando Kabigting, who previously worked as an accessories designer at Calvin Klein, bases his company, FDK Florals.

Kabigting explored the idea of wabi-sabi and the practice of ikebana during a trip to Japan this fall. Together with his partner, Go Kasai, they traveled to the suburbs of Tokyo, Kyoto and Yokohama, spending time with ikebana masters and learning about how Japanese floral arrangements reflected the natural environments surrounding them. Everything in floral from Japan comes from nature, Kabigting explains.

“But it’s their idea of nature,” he says, “whether it’s a crooked branch, or a leaf that’s dying, clinging on for life — next to a vine that’s very much alive.” Kabigting is relaying the story of his trip from inside his Bedford-Stuyvesant apartment, where he lives with Kasai and their puppy. The building is on a historic row of Greystones, and most of his home’s interior is more or less preserved from its original construction — there’s a French door frame separating the living room from the kitchen and a small nook with a stained glass window. Upon his dining room table: a spread of galvanized canisters and glass vases holding red rose buds, honeysuckle berries and flowers from a Ginkgo tree located right outside his house. He grabs a sprig of this, a handful of that, and sits at his coffee table to put together an arrangement. The stone base — which he says he picked up at Calvin Klein — has a small tool called a kenzan inside, used to hold the branches and stems in place. Snipping off ends, he places the Ginkgo flower next to some mushrooms he foraged while at a friend’s house upstate, and points to them. See? Conventional beauty — the flower — next to something a little more gnarly — an old mushroom. Asymmetry. Imperfection.

Kabigting got his start in the fashion business while living in Los Angeles in the early Aughts. He worked at BCBG for three years before making his move to New York in 2010. Once there, he bounced around, dabbling in marketing, working for a nonprofit, then Li & Fung and ultimately at Calvin Klein, where he designed handbags for the off-price division. He then worked for other brands, but was called back to work at Calvin Klein with the contemporary market. By that point, Raf Simons had come on board at the fashion house.

“Raf’s new direction was exciting, and I wanted to be a part of that,” Kabigting explains, adding that the company allowed its creative team and designers freedom in their day-to-day activities.

“One day, my entire team might take a trip to [art museum] Dia:Beacon, and be inspired that way,” he says. “You could be taking pictures of the samples you get in, interacting with your factories overseas. Or you could literally just be cutting leather.”

Kabigting had an interest in florals and set design even before he’d come to New York — while living in a loft in downtown L.A. in 2009, he and Kasai threw parties at which they’d zip-tie branches from trees to the exposed pipe, and tie fishing line to trees so they’d appear to levitate above the guests. While at Calvin Klein, he practiced his love for arranging by giving flowers to his coworkers on their birthdays and leaving stems on people’s desks. He decided to try pursuing the flower thing in January, and by May, he’d resolved to leave his post at Calvin Klein and make FDK Florals his full-time job.

Since then, Kabigting has created floral arrangements for Gucci’s party celebrating its tie-up with Dapper Dan and also for a pop-up in Totokaelo’s SoHo store. He has additionally teamed with Google on some of the company’s events, and works regularly with the influencer Nam Vo, who is best known for doing Kylie Jenner’s makeup. His regular gig, though, is a workshop he leads at Urban Outfitters’ Space Ninety8 in Williamsburg — where he teaches interested parties how to make arrangements and about the philosophies of ikebana.

Kabigting says he has a short attention span, which might explain his tendency to jump from one line of work to the next. But he says this mind frame allows him to get creative with his arrangements, tell stories with colors and textures and make something that can be appreciated from multiple angles.

“I don’t watch commercials, I can’t read a book from front page to back — I go to the back,” he says. “With movies, I’m the same way. I start from the end. Whether it’s this idea of control, or whatever it is, I like to be interested immediately. I like this idea of a beautiful, well-styled thing that is a full-on celebration, which you’re excited by.

“To me, fashion had all of that. The way I designed products and handbags, I took that same approach into floral as well. You appreciate the long neck of a stem the same way you would a beautiful strap, and the way it drops on your shoulder.”

Kabigting says he still gets tapped for fashion jobs every now and then — sometimes he’ll consult for a brand or even design a handbag. He hasn’t fully left the fashion industry, but is certainly focusing his efforts on FDK, which has gained serious steam in the past seven months. He says he set out with a soft goal for the year when he started his company, and he achieved that goal in the first six months. With support and interest from customers, he is able to take more trips — his aim for 2019 is to travel the world and learn other forms of floral design and discover new varieties of wildlife to include in his arrangements. Perhaps he’ll gain more knowledge similar to wabi-sabi and ikebana.

“I want to be able to learn and see some of that,” he explains. “I want to get to know more of the product. There’s so much newness to it. It’s that early on — I don’t know, honeymoon phase? It’s that excitement, but it’s continued on. I’ve kept in that moment, in a way.”