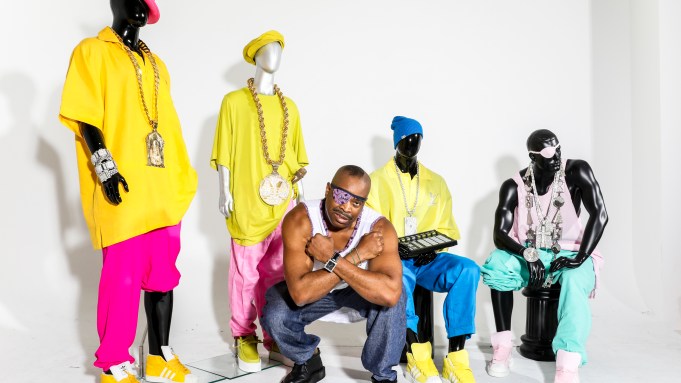 The 53-year-old rap legend, whose real name is Ricky Walters, received his first one on Christmas about 10 years ago from his wife and manager, Mandy Aragones, who thought his interest in fashion would lend itself to the apparatus. Since then he’s acquired four more and when preparing for shows or appearances — Walters doesn’t have a stylist and he never has — he dresses them up in prospective outfits.

For his shoot with WWD he wanted to re-create that process, which is a surprisingly physical undertaking. At times Walters was on the floor screwing in limbs or wrestling Clarks Originals Wallabees onto immovable feet. Between changes he wiped away forehead perspiration with a purple wash cloth that matched the trim of his linen tank top. Walters usually steams or irons himself because he finds it therapeutic, but that day his publicist and an assistant completed the task of making linen look crisp. Every so often he would walk away from the mannequins, reassess and then make adjustments. After about an hour of this methodical routine, and the addition of a rose-gold mic and a drum machine, he was finished.

“All right, I’m done,” said Walters in his smooth drawl, which had just a hint of an English accent.

The final product had the color palette of a Matisse painting. Walters said he observes how color looks on brown skin and uses those findings for his own wardrobe. He coupled hot pink with marigold, lime green with bubblegum pink, teal with baby pink and an almost highlighter yellow with royal blue. The looks had a clear connection to Slick Rick style totems — one mannequin donned a pink eye patch and another wore a tilted Kangol-esque hat — but they also served as a mini retrospective on black style. The Adidas shell toes with fat laces and the gold rope chains harked back to the Eighties. The skullcap and rolled-up pant leg styling, which was popularized by LL Cool J, was plucked from the Nineties. And the platinum jewelry and tall T-shirts were symbols of the Aughts.

Walters could have worn these looks himself and had his picture taken, but he’s a craftsman. He’s crafted a lexicon for hip-hop with his witty lyrics and memorable melodies that have inspired other classic rap songs — he’s one of the most sampled rappers. And he’s crafted a look that’s foundational to hip-hop style, so much so that the National Museum of African American History showcases one of his fedoras and an eye patch, which he wears due to an accident with glass that blinded his right eye when he was only 18 months old.

A post shared by Slick Rick The Ruler (@therulernyc)

His most obvious contribution is the way he adorns himself with ornate and gaudy jewelry. But when Walters, who was born in London and moved to the Bronx at 11, first came into public consciousness during the mid-Eighties, he presented a new mix of regality, dandyism and street that is still felt today — the double-breasted suits and heavy gold jewelry Jay-Z wore in the “Apes–t” video are descendants of Slick Rick style. This look has been commoditized for years by luxury companies without acknowledgement, but Walters said when he wore these pieces more than 30 years ago, he wasn’t looking for any.

“Nah. Nobody cared about working with the brands at the time. Everybody just wanted to be fly,” said Walters, who still has a disarming smile and diamond fronts. “You had to have some knowhow to go downtown to get Gucci, Louis [Vuitton], Fendi or Prada and that represented wealth and prestige. You respected the name, but the name wasn’t carrying all of the swag you had. You didn’t wear these designers to get them to notice you. You wore it for your peeps. It was like a mating call.”

The schism between luxury brands and the communities that make them cool has started to shift. Pharrell Williams works with Chanel, Virgil Abloh is the creative director at Louis Vuitton Men’s, and earlier this year Dapper Dan opened up a Harlem atelier that’s funded by Gucci. Walters is also starting to reap the benefits of a style he devised. He’s now working with Bally, the Swiss luxury firm he name-checked in his 1985 breakout hit with Doug. E Fresh, “La Di Da Di,” and wore a red pair on the cover of his first album, “The Great Adventures of Slick Rick.” To celebrate the 30th anniversary of that classic piece of work, Bally hosted a party at its Beverly Hills flagship on Rodeo Drive. “Who would’ve thought decades later, I’d be taking over the Bally store on Rodeo Dr.,” tweeted Walters, who took pictures from a throne wearing a customized Bally eye patch, shirt, tank top and sneakers.

Walters first discovered Bally shoes in the Seventies and still describes the moment with wonder and specificity. He spotted them on a man in the West Village who was older than him, but still young. They were gray suede slip-ons with white stitching. It was the kind of shoe Walters presumed rich people wore with a robe or on the tennis court. He made note of the style and ended up purchasing his first pair of navy blue Bally slip-ons during high school in the early Eighties.

“The Village was up on fashion faster than anybody,” said Walters. “I found most of my fashion influence from gay minorities that lived uptown but traveled back and forth. This guy was wearing them before the Jamaicans started wearing them. It was just astonishing because people were still wearing Pumas and Pro-Keds. Once you see something you keep it in your mind and then you go for it. We all ran for that s–t.”

He had other stories to tell about memorable looks. The Ralph Lauren Polo suit he wore in a photo shot by Janette Beckman in 1989 was handed down to him after his cousin died. The suit, which still had the tags on it, was $700 and Walters also wore it to work on Wall Street in the Lehman Brothers’ mailroom. He revealed that the Fendi bag placed at his feet in the photo was fake. 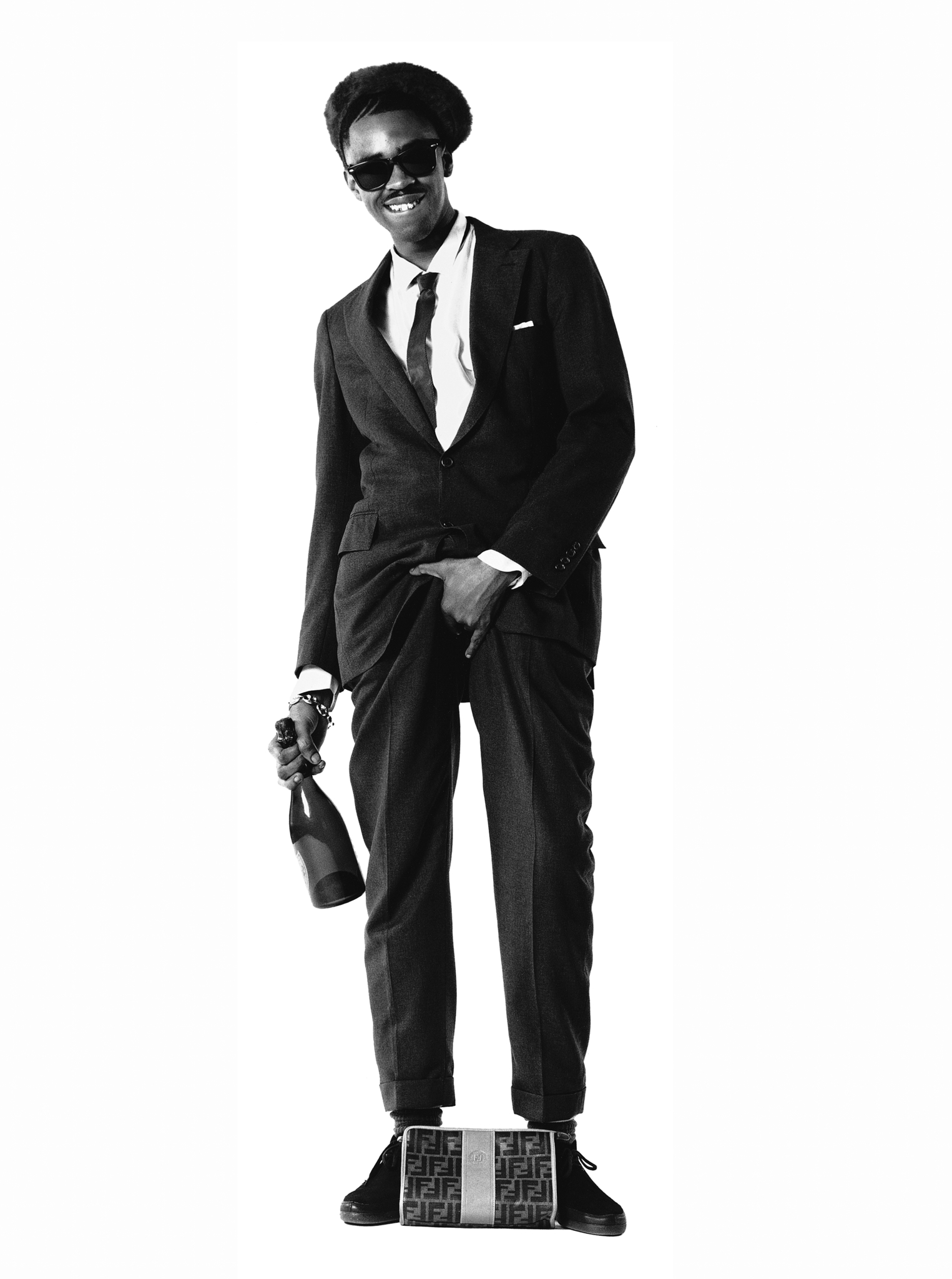 “It was from Chinatown, but nobody could tell,” said Walters. “It’s like a Cinderella story. You get a little fake, you get a little real, you put it together and voilà.”

Beckman photographed him again the next year, two months after he shot a bystander and his cousin, Mark Plummer, who tried to extort Walters and his family after he fired him as a security guard. Both victims survived and Walters claimed self-defense, but he would spend five years in jail for attempted murder and issues with his citizenship — Walters wasn’t granted U.S. citizenship until 2016. In the image taken before he went to Rikers Island, he’s wearing a crown, his typical mound of necklaces and holding a small gold gun in each hand. He’s now critical of the image.

“I was kind of caught off-guard. As you can see the fashion isn’t all together. I just threw a crown on and I had chains on already and did a little gangster pose,” said Walters. “I didn’t like that picture that much. The chains weren’t organized neatly. The crown was too big. The eye patch is too big.”

When he was released from jail in 1997, Walters got to work on his fourth album, “The Art of Storytelling,” which was released in 1999. In the video for “Street Talkin,’” which features OutKast, Walters exchanges his gold chains for silver and platinum jewelry to signify an update to his image. Walters’ look has evolved but also stayed the same. He still likes his Clarks Wallabees, which he customizes with a platform sole, and he is still fond of big pieces of jewelry. Most of his clothes are made by Ron Mishon, a tailor based in Harlem who Walters calls a younger Dapper Dan. He remembers wearing a green Dapper Dan piece with Fendi logos in the Eighties, but feeling like it didn’t fit his image.

“Some guys looked good in it, but I didn’t,” said Walters.

Asked how he feels about Dapper Dan’s and Abloh’s new partnerships with luxury brands, he was congratulatory but sounded a tad skeptical about how open these brands are to significant changes. But he’s mostly adverse to the tighter-fitting clothes he thinks companies push onto the consumer.

“I see the whole market is doing the same thing,” said Walters. “I can see one establishment making small suit jackets, but all of y’all? I mean cuh-monnnn. What is this, a conspiracy? It doesn’t make the African-American male look good. It makes you look like a nerd. An Urkel.”

Although Walters continues to tour, he hasn’t released new music since 1999, nor has he made his rounds on the handful of rap podcasts that have opened its doors to legendary rappers — he didn’t know what a podcast was and said all of those decisions are up to his wife. But his voice is still prevalent in music. Kanye West samples Slick Rick’s “Hey Young World” on “Ye,” his recently released album, and West used Walters’ voice again when producing Nas’ “Cops Shot The Kid.” Walters, who only owns the masters for “La Di Da Di” and “The Show” but still gets paid for other samples, was pleased with the Nas song.

“Out of all the songs on the Kanye album, the Pusha album and the Nas album, I thought that was the strongest song,” said Walters, who selected Black Thought’s Spotify station as the background music for the shoot.

One of the mannequins Walters dressed had on something peculiar. It was a yellow linen shirt embroidered with a silver Louis Vuitton “LV” logo. It was similar to the logo that summoned the ire of the Internet in 2015 when Walters wore a bowling shirt that was deemed fake Louis Vuitton. Walters said he wasn’t fazed by the jokes.

“I mean, I take criticism. They said the LV was too big. It looked fake and stuff like that. Yeah. OK. Maybe you are right. Maybe it was too big or fake,” said Walters. “But as far as the colors nahmean? Louis Vuitton should play in the pastel game. You got some tank tops out there that are waiting to get made. You got some money out here kid.”

It was evident that for Walters, his bootleg Louis Vuitton is better than the real thing.