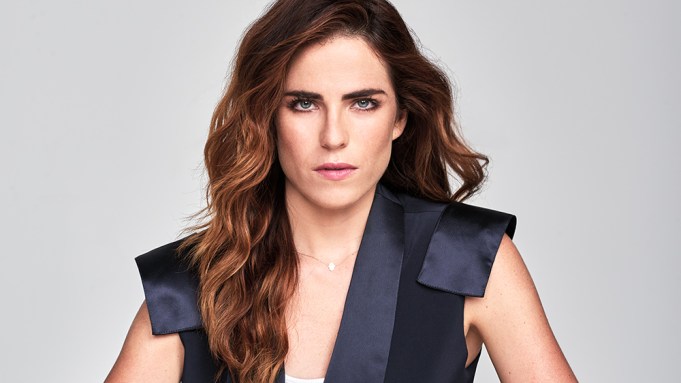 Karla Souza may have been a new face to American audiences when she first appeared on Shonda Rhimes’ cult-favorite, “How to Get Away with Murder,” but she was in no way an up-and-comer. Souza, 30, was a full-fledged star in her native Mexico, appearing on the covers of magazines  and as a face of L’Oreal. After appearing in the highest-grossing Mexican film of all time, as well as the highest-grossing Spanish language film in North America, she decided to try her luck in L.A. The risk paid off, and she landed the role of law student Laurel Castillo in the Viola Davis-helmed “How to Get Away with Murder,” which returns tonight for season three.

WWD chatted with Souza while she was on a break from filming about uprooting her life for the show, what to expect from the third season and what she’s learned from playing Laurel.

WWD: How did you end up getting the role of Laurel?

K.S.: Oh, it is something that I don’t think people could understand unless they do it. Not only logistically — the traffic in L.A. is horrendous and the auditions are spread out through the entire city — but then one character is a prostitute and the other is a mom of two children and the other one is a Marine. And you’re changing in the bathroom of a McDonald’s and you’re trying to change your hair, change your makeup, and you’re sweating — and at the same time you just left an audition where they treated you very poorly and you felt humiliated and you ended up crying in the bathroom, calling your managers saying “I never want to do this again.” But then you have to wipe your tears off and walk in and pretend like you know what you’re doing in the next audition. It’s just horrendous.

WWD: You had such a developed career in Mexico — what made you want to try American television?
K.S.: I’m just going to be blunt: I guess, ambition. I hadn’t culturally explored acting in English, professionally. Like I studied in England and I did my acting studies in London, in English, so I wanted to explore acting in that language. And I lived in France, my family lived there for 12 years, and I also want to explore that language. But right now I’m focusing on here. Edgar Ramirez is someone I see coming out of not long languages but accents, and nationalities. I look to have that in my career. And I wanted to expand that. I knew it would be difficult — I was very comfortable and my ego was being fed every day in Mexico — the easiness of thinking that you are — you know, I worked for it, I worked for it for a while, until I hit the box-office success. And it was like, I could stay here and keep getting all these offers but you start getting people just kissing your ass and if you want a challenge and you want to grow, I think you have to move away from that. And so that’s what I did.

WWD: How, then, did you first get started in acting?

K.S.: I was actually in a movie when I was seven — I was living in Aspen and they did an open audition in the school for a one line kid part. And I remember vividly thinking ‘This is kind of awesome and I want to do this’ and my parents were like ‘no no, this is not going to happen,’ and then they never let me do anything again until I was 18 and I graduated. They wanted me to have that plan B, but I always knew I wanted to do this. Once they approved, I was able to go and learn the craft, in London and then in Russia.

WWD: Obviously the drama on all Shonda shows is kept under wraps, but what can you tell us about season three?
K.S.: I’ll tell you what it’s like to do season three, as an actor. This is what’s difficult, in season three the writing is jumped up in its braveness. We’re all definitely feeling it. The show is taking a complete shift. And it’s scary, obviously, because it’s the unknown, but it’s great because we have a better handle on the characters and a better handle on what we’re doing, and what the machine of doing network TV is.

Also, you’ve [now] lived with a character for three years, and who this woman is is even a surprise to you. I believe that the craft of making it new and exciting every day, that’s a really nice challenge that we all get to exercise this season.

WWD: How has Laurel changed now going into the third season?

K.S.: I’m handling a character that is not a stereotype — she’s a Mexican-American girl who is growing up to be a woman. And to be able to have a say in the collaboration of what is written for her is something that I take very seriously, because I feel a lot of responsibility with that community.