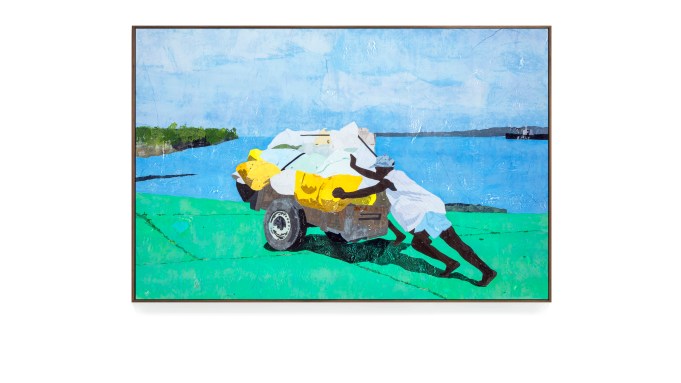 After leaving New York for Mexico early last year, artist Hugo McCloud rented an old storefront space in Tulum to work out of while building his new studio nearby. The temporary space was located across the street from an area of land occupied by squatters, a scene that provided an unexpected source of inspiration for McCloud’s newest series of paintings.

That collection of paintings was recently shipped to New York for the artist’s solo exhibition “Burdened” at Sean Kelly Gallery. McCloud has established his artistic language through materials like tar paper and scrap paper — materials disregarded and undervalued by the art world. In recent years he’s added plastic bags to his lexicon, developing processes to transform and upcycle the disposable material into fine art.

“Burdened” also marks the artist’s foray into figurative art, having already rooted himself within the world of abstraction. McCloud’s use of figuration was a direct way for him to introduce viewers to the people the works are about, and move the conversation past an admiration of the materials used to discussion of humanitarian issues.

McCloud’s works investigate the ways in which people around the world make do with what they have and their day-to-day perseverance amidst hardship. Many of the people depicted in his paintings are men pushing loads of goods on bicycles, their faces obscured by the items.

“All of my older work started from those types of conversations — how people do stuff, finding beauty in these things that are overlooked or are misinterpreted, and the will of humankind,” he says. “That’s what this show is about: the idea of moving forward, even if you don’t have everything that you need.”

While the color palette stays vibrant throughout the exhibition, McCloud balances the softness of fruits with heavier subject matter; other paintings in the series depict migrant boats and images of the refugee crisis in the Mediterranean. “The migrants from Libya are going on a boat without a life vest, knowing that the percentage of failure rate is high. At the same time it’s a better decision for them,” he says. “You have to understand the level of hope that these people are living with.”

The title of the show, “Burdened,” speaks to the literal burden depicted in his works — people carrying heavy loads of items — but it also addresses the burden of the current moment. “We’re all carrying heaviness,” he says. “We’re all trying to stay hopeful.”

McCloud’s plastic journey stretches back eight years ago to a trip to India, where he was interested in learning more about block printing. His first night there, he walked around his hotel’s neighborhood and came across a lot filled with discarded sacks of construction materials. He was transfixed by the colorful polyethylene bags. When he asked a gallerist where he could find more of the woven plastic material, he was pointed to Dharavi, one of India’s biggest slums and an industrial hub for plastic recycling. McCloud brought a large stash of the bags back to the U.S., and began experimenting with ways to use them in his artistic practice while continuing to work on his tar and metal paintings.

Those bags also contained a universality, and McCloud was interested in how many tap into an instant emotional connection through recognizable and branded colors and markings. (Some of which are still visible in the paintings.) He began collecting bags from all over the world — 7-Eleven, from South Korea, from Ethiopia.

“I knew that it was a material that told a story; people can identify themselves through these materials,” he says.

Despite the recent ban on single-use plastic bags in New York, McCloud isn’t focused on the antiplastic conversation and isn’t approaching the material from a place of protest.

“The plastic is a medium; it’s a tool to open up these different conversations,” he says, adding that while plastic bags can easily trigger environmental discussions, that conversation is also inherent, although much less common, to acrylic paint.

While the “Burdened” paintings are the focal point of the exhibition, the artist is also exhibiting a few of the flower paintings he began creating in March of last year. Instead of consuming news and media, the paintings were a way to get into the studio without the pressure of making work for any particular show. He describes the resulting works, which are sketched and incorporate plastic, as a “study” and way of documenting something beautiful each day.

“It was an interesting way to document the moment,” he says. “Abstracted from the reality of what was really going on.”