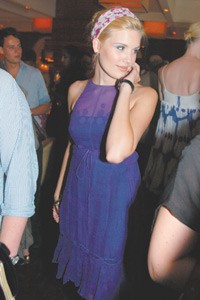 “Come on, gimme that glitter ball!” Amy Sacco begged London man-about-town Molaroid Soloman at the Calvin Klein dinner in London Wednesday night, as Seventies classic “The Hustle” filtered over the sound system. What she wanted so badly was a disco ball the size of a grapefruit that Soloman regularly wears around his neck at parties — and she was in luck, as he gladly handed it over.

The evening was one big love-in for the designers. “These guys brought me back into the Calvin Klein fold!” said Macpherson. “They offered to dress me for the gala at the Met last year, and I rediscovered the brand.” Saltzman, who was wearing a red silk strapless number by Costa, said, “If this dress looks familiar, it is. I have 11 of them hanging in my closet — all in different colors. What can I say? They’re fabulous.”

Earlier that week, Costa and Zucchelli were feted at the Paris residence of the American Ambassador to France, Craig Roberts Stapleton. Vodianova, just a guest this time, revealed that like mother, like daughter — Neva, her three-month-old daughter, will be a cover girl for the October issue of French Vogue. Not that Neva had to work that hard, since she spent the shoot cradled in her mother’s arms. “She’s not taking my place just yet,” Vodianova joked.