Inhaler Is the Dublin-based, Genre-Rejecting ‘It’ Band Led by Bono’s Son

Their new album, “It Won't Always Be Like This,” reflects the band's ever-evolving nature.

Inhaler was roughly halfway through completing songs for their debut album when the pandemic hit. The band — composed of vocalist and guitarist Eli Hewson, bassist Robert Keating, guitarist Josh Jenkinson and drummer Ryan McMahon — released their first single in 2017 and have been building toward the record ever since, and yet suddenly the entire world changed, and with it the way they made music.

The result, titled “It Won’t Always Be Like This” out today from Interscope Records, is a split personality album that the boys say perfectly reflects their ever-evolving nature as a band, one that eschews genres and goes with the flow.

“There’s almost like two sides to the album: there’s the before COVID-19 Inhaler and the after COVID-19 Inhaler, and they’re pretty different things,” Hewson, who just so happens to be the 21-year-old son of Bono, says. “Before lockdown, we had songs that we’ve had since starting the battle, like ‘Cheer Up Baby’ and ‘It Won’t Always Be Like This,’ songs that were around at the inception of Inhaler. The stuff that came in lockdown, we kind of got a bit more experimental with and pushed ourselves to go into some territories that we hadn’t before. And in a way, I think we’ve made a better album because of the time off and the time to really focus on it as a project, not just a compilation of singles.”

During lockdown, they followed the advice of their producer that in order to breathe out, you have to breathe in — i.e., creative output only comes with inputting newness. For Hewson, that involved properly diving into Bob Dylan for the first time in his life, as well as going out for “a lot of walks, a lot of takeaway coffees,” he says. “Very retrospective kind of thing.”

Their collective mood shifted as time went on, as is reflected in the music. They started writing more mid-tempo songs, “because that’s just the way we felt,” and spent a lot of time “daydreaming.”

“God, it’s weird thinking back to it because it all seems like it went by so fast, but we still feel like nothing’s changed, but really everything’s changed,” Hewson says. “It’s a funny one.”

Inhaler was formed initially as a result of the friendship among Hewson, McMahon and Keating, who went to school together at St. Andrews College in Dublin.

“We kind of just went over to each other’s houses a lot and played music and were really bad,” Hewson says. “And then we kind of discovered that we needed somebody who could play their instruments. And that’s when we found this lad [Jenkinson] and asked him if he’d ever join the band. I think from that point on, we’ve kind of been trying to do it seriously. Before that, it was just an excuse to get together and eat pizza and listen to Nirvana.”

Their first two songs, “Cheer Up Baby” and “It Won’t Always Be Like This,” drummed up some attention online, and soon enough they went from playing 20-person gigs to a 300-person set at the Electric Picnic festival in Dublin. They were set to return to school but decided to give it a proper try. 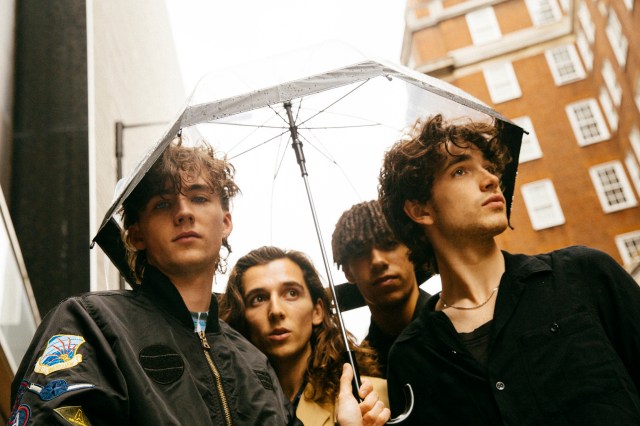 The band’s name is an ode to Hewson’s teenage asthma, believe it or not. They were hunting around for a name and “people just started calling us the Inhalers,” he says. They decided to keep it after entering a battle of the bands in Dublin, where they lost out on best band and best song but came away with best name.

Hewson says that growing up, he was exposed to “the right types of music within my family household,” which he credits with his interests now. By the time he was in school, he was seeking out friends to trade music discoveries with, and has been “living off that energy” ever since. “I’m still looking for music that I haven’t found,” he says.

Keating, meanwhile, recalls repeatedly listening to a Smashing Pumpkins album that his sister bought him when he was 12. “And that was like, ‘Oh my god,’” he says. “I’d listen to those guitars and then I started teaching myself guitar. I had guitar lessons from a young age, but I didn’t really like it until I actually found music that I enjoyed playing.”

The boys say they don’t have a process when it comes to writing songs, that it is more like fishing, according to Jenkinson.

“It comes from a lot of things. It can come from a drum beat or it can come from a half-baked song or some chords. We like to keep it spontaneous in the writing room because I think that’s part of the fun of it, not knowing what’s going to come next,” he says. “I think there’s a lot of bands that maybe have a formula or have a sound that they like to stick to, but for us really, I don’t think we’ll ever find our sound, and I think that’s kind of exciting.”

“We’re just changing as people constantly,” Hewson adds. “Our generation doesn’t really listen to genres of music anymore. It’s really personalized. I think we’re just a reflection of that. We just want to make great songs. We don’t care how it sounds or the aesthetic. It has to feel like it has passion and effort.”

The debut album isn’t so much a concept album as it is an exploration of how they’ve felt over the past several years, pandemic year being a particularly defining time.

“I think if there’s one main feeling, it’s kind of hope and just wanting to be.…I don’t know,” Hewson says. “A lot of the songs were inspired by that area between being a teenager and being an adult, that kind of weird area where you have to take on a lot of responsibility. For us, we left school and got straight into being in a band. You almost get into a band so you don’t have to grow up. You live in a dream world and then when the pandemic happened, we had to mature. People forget, but at the start of the pandemic, there was a lot of fear and we didn’t even know if you were going to be a band anymore. We didn’t know if you were going to be able to play gigs for years. It really forced us to just talk about our surroundings and be broader. But I still think that the overwhelming theme of the album is just hope — hope that things will change.”