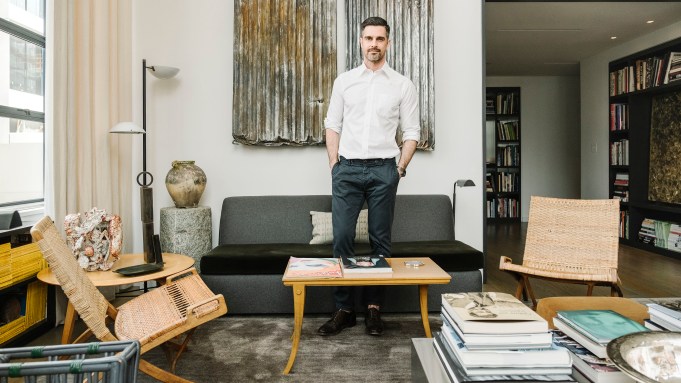 “We had this sort of long dating period,” says interior designer Andre Mellone from the living room of his stylish two-story Manhattan apartment, overlooking the High Line through giant casement windows.

One might be mistaken for thinking he was talking about romantic life. But Mellone, perched on a gray flannel sofa next to a stack of his grandfather’s old National Geographic magazines, is actually referring to how he got involved in his latest and most high-profile retail gig to date — redesigning Carolina Hererra’s flagship on Madison Avenue in Manhattan.

Starting out designing the interiors of private abodes (Misha Nonoo and Jason Wu are among his clients), the Brazilian native, an architect by training, has over the past few years become more prolific in the retail world thanks in part to his friend, designer Thom Browne, who gave him his first store to design for his namesake brand.

“He one day called me out of the blue and he said, ‘Do you want to do a store for me’ and it was a very small place in [South] Korea. He didn’t start by giving me a huge project because he knew I was starting out,” explains Mellone, adding that Browne liked his ability to sketch.

Browne taught him that stores designed specifically to showcase clothes are becoming obsolete and the whole idea of retail is moving to experiences, which requires a mix of product, furniture and art. In summary, “you design rooms as if you’re designing a living room.”

“I’m very grateful to Thom because he was one of the first people [who] believed in me and gave me a chance and I learned everything that I know about retail with him,” Mellone adds.

Once he proved himself, Browne, who last year sold a majority stake in his company to Ermenegildo Zegna, gave him more stores to work his magic on, including the designer’s New York flagship, as well as a Paris pop-up.

Then Wu, clearly thrilled with his TriBeCa apartment makeover, came calling. He tapped Mellone for his first retail store concept inside Saks Fifth Avenue, and later on the bottle for his namesake fragrance: “If you are a designer, every design challenge you should be able to meet, whether it’s a huge building or whether it’s a perfume bottle,” Mellone says. The duo is working on Wu’s China expansion plans.

All this, no doubt, caught the eyes of Carolina Herrera chief executive officer Emilie Rubinfeld and creative director Wes Gordon as they were looking to revamp the brand’s Manhattan flagship — a historic corner property on the Upper East Side — which reopened its doors post-makeover this week. But Mellone himself readily admits that perhaps he wasn’t the obvious choice for its revamp.

That’s because his work is viewed by many as having masculine undertones, while Carolina Herrera is an iconic feminine brand. But after the aforementioned dating period when they were “feeling each other out” — discussing ideas and concepts — it became apparent that they were in fact the perfect match.

“I actually felt like that was a really interesting and strong move on their part because I think sometimes in design, opposing dynamics can really benefit so I think we’re actually doing something that is really feminine and very soft and they’re bringing that out in me in a sense,” he says. “It’s the flagship on Madison and I think it’s very important to them because they have a new creative director and they haven’t really redesigned their environments since the year 2000.”

And if his private residential and retail clients and his foray into designing perfume bottles weren’t enough to keep him busy, Mellone has recently added another string to his bow: luxury condominiums.

He’s designing the whole amenities suite for 25 Park Row, a 110-unit luxury residential building in downtown Manhattan where a four-bedroom penthouse will set one back more than $12 million.

There, well-heeled residents will have access to a golf simulator, child’s playroom, gym, yoga studio, massage rooms, plus an indoor pool, all with an Art Deco theme, inspired by the surrounding buildings’ histories.

But while Mellone expands his empire, he’s not going to turn his back on his bread and butter private home practice — he’s working on a Brazilian beach house, among other projects.

In the longer term, he has his eyes firmly set on hotels. “My big dream is to start going into hospitality. I love to design homes and my experience and my understanding of hotels is becoming more towards that direction,” he says.

From Flagship Stores to Condos: The Evolution of Ryan Korban