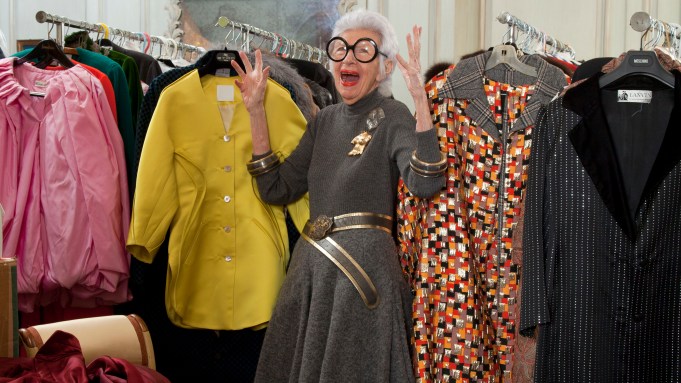 Iris Apfel has a lot to say. At 96 years old, the popular and outspoken personality has amassed an arsenal of stories about the fashion industry — a few of which are chronicled in her new book, “Iris Apfel: Accidental Icon,” (HarperCollins) out March 6.

But don’t call it a memoir. Following the success of her coffee-table book in 2007, Apfel received multiple offers to do another book, but didn’t bite until the right opportunity came along.

“I didn’t want to do another coffee-table book, and I didn’t want to do a memoir — and I certainly didn’t want to do a how-to book,” she says, speaking by phone from her Florida residence. “I find how-to books rather insulting. It’s not my place to tell you how to dress or what to do. I think it should be an individual matter. So I kept saying ‘thank you very much, but no thank you.’ And then a couple of years ago in one week I had three different telephone calls from three different publishers. And they all said, ‘What about doing a little book, musings, just what you’re thinking about. Just something for the youth market,’ because I do have a lot of young fans, and I said, ‘Gee, that sounds like fun.'”

It might not be a how-to book, but given how busy she stays — books, modeling and advertising jobs, her accessories and home furnishing collections — there are plenty of essays offering insights into her tenacity, not to mention the last section of the book: “How to Live to Be 200.” Apfel doesn’t stop.

“I’m so busy, I work like a crazy person. I love to work, and particularly the last two-and-a-half years since I lost my darling husband, who was with me for 68 years,” said Apfel. “We were in business together and everything else, so the loss was monumental. And I decided that to keep my sanity, I better just work even harder, because if I stay home and think, I’ll be very unhappy. God was good to me, and I got a lot of interesting commissions. All kinds: designing, modeling, speaking, traveling and so I’ve been working like mad.”

The book, which is filled with personal anecdotes and photos, isn’t the first look into Apfel’s interior life; she was the subject of the late Albert Maysles’ 2014 film “Iris,” one of his last films.

“I’m a very private person, and I’ve always been known in my field and whatnot, but the accolades and this attention and this recognition, which is global now, is really quite something,” Apfel says of her “accidental” fame. “I’m getting used to it, but I really enjoy my privacy. And of course, really intimate private things we don’t talk about.”

What she does talk about in the book: wearing denim as a woman in the Forties, her first jobs after college — including a stint at Women’s Wear Daily as a copy runner — meeting her husband and secrets to a long marriage, her interior design business and design restoration work for the White House, love of jazz music, and her disdain for smartphones.

As part of maintaining her privacy, she stays off of social media, although there are plenty of fake accounts in her name. “I don’t approve of social media myself, so I don’t have any part of it,” she says. “I know it’s a wonderful tool for commerce, but I just can’t understand how people are so interested in every detail that everybody does. It seems to me to be a bit nosy,” she continues. “I think you’ll be hearing a lot in days to come about the dreadful effects it’s having on young people. I find young people don’t have any inner life anymore, they’re devoid of curiosity — I mean real curiosity — and self-expression, imagination, they just press a button and they think it’s all there, and that’s not good.”

This spring, Apfel has plenty to keep herself busy: in addition to the book, she’s working on a pop-up shop at Bergdorf Goodman, a Barbie doll in her likeness with matching human-size outfits, jewelry and clothing collections for HSN, some modeling and a line of porcelain jewelry.

“Otherwise I don’t have anything to do,” she says, before closing with a piece of advice: “You gotta enjoy yourself.”