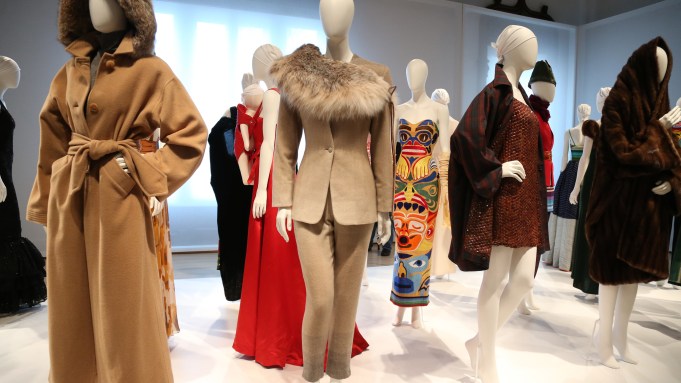 NEW YORK — Perhaps more than most, Isaac Mizrahi really isn’t any one thing. Designer, no question; artist and entrepreneur — check and double check. But the New Yorker also qualifies as an actor, director, set and costume designer, writer and cabaret performer.

That 30-year multidimensional career is about to be explored when “Isaac Mizrahi: An Unruly History” bows at The Jewish Museum here Friday. Nearing the end of what has been three years of sifting through archives and preparing for the exhibit, Mizrahi said last week, “For me, nothing is done until it’s finished.”

But is it ever? With a new collection for Hudson’s Bay Co. set to go, his ongoing QVC deal and show, a memoir due to be turned in to publisher Flatiron Books next year, various licensing commitments and a TV project in development, Mizrahi managed to comb through every item in his archives before deciding on the show’s selections. His cultural extracurricular projects are being developed under the newly formed Isaac Mizrahi Entertainment.

Following his breakout 1987 collection, Mizrahi raced to firsts — filming “Unzipped” with documentarian Douglas Keeve in 1995, teaming with Target Corp. in 2002, collaborating with the Mark Morris Dance Group, creating a one-man show “Les Mizrahi” and narrating the annual December performance of “Peter and the Wolf” at the Guggenheim for the past nine years.

In an industry that is all about “what’s next,” Mizrahi wasn’t dying to take stock of his career, never mind how that might affect his creative thinking. “It’s dangerous because I don’t like looking back. I never have. I’m not a nostalgic person. So it began as sort of a tedious thing. Going through the archives, I thought, ‘I’m not going to make it through this.’ Then I thought, ‘Maybe you just hire someone to do it,” Mizrahi said in an interview. “I stuck with it and it became very compelling. This idea of looking at your own plans and your own wishes, and what they actually meant culturally, and where you are today and where you’re going, was a good thing to do.”

That seemingly obvious statement makes more sense after previewing “Unruly History,” a mélange of influential archival pieces, costume designs, video footage of runway shows and TV appearances, sketches and Nick Waplington’s backstage Polaroids of Mizrahi’s shows. The first installation reveals a zenith of compulsive exactitude — 300 of the thousands of colorful swatches Mizrahi has collected over the years are framed, creating a colorful mosaic inside the entrance of the second-floor gallery. A tidy line of color-coded boxes borders the top of each column. Artistic as the presentation is, Mizrahi explained, “I keep the swatches on Velcro, which is the sickest thing in the world. They’re all Velcro-ed on the page as opposed to glued so you can take them off, use them and put them back, because I’m out of my mind, right?” Mizrahi said.

“Being this type-A kind of crazy achievement-oriented person, I’m realizing more and more as I get older that it’s not about any of that. Achievements are bulls–t. It’s about a sense of pleasure. I’m not talking about a hedonistic pleasure where you’re loving chocolate ice cream — that’s part of it, too,” Mizrahi said. “There’s a pleasure you get from making something. The one thing I really liked about clothes was textiles and standing there with a woman and making those clothes. What you look back at it — I need more of that in my life, the actual pleasure that comes with good solid work.”

Wanting to make the survey feel alive, Mizrahi has suspended from the ceiling three newly-designed coats combining organza, tulle and chiffon for a “quilted” effect that is meant to be reminiscent of Technicolor and changes in tone depending on the light. “It’s not fluorescent. I’m trying to redefine color as it moves through light,” he said. “That’s been my entire life — trying to figure out how to please the taste buds of my eye.

The exhibition’s 1988 mink blanket displayed casually as a coat, a 1994 lumberjack ballgown (a fur-trimmed hooded plaid down jacket with a silk taffeta skirt) and the 1998 Baby Björn duchesse satin ballgown with a matching baby carrier reinforce that claim. Referring to the 1994 Totem Pole gown — an embroidered wool flannel strapless gown that accented his blend of hues and ethnicities — Mizrahi said he did have some I-can’t-believe-everyone-liked-that-dress-so-much-it-has-to-be-in-the-show moments. “To me, it was kind of like a visual joke. There was nothing good structurally about it that I thought was interesting,” he said. More inventive is the Anh Duong-loaned “1990 Slingshot dress or Rabbit Ears dress, which is completely backless. Now a company makes a bra using a similar concept.”

Referring to the Exploded Tulip dress (an homage to the photographer Irving Penn), Mizrahi said such oversize floral prints might strike visitors as “banal” today. “Sometimes you look at things by now and they are such a part of the culture….I’m saying, ‘Yeah, research it because before I made that print, there was no such thing.'”

With zero interest in staging “just another boring retrospective” and full-on hatred of mannequins, Mizrahi interspersed two galleries of clothes with multimedia features, costumes and a passageway with perfectly aligned colorful sketches. On closer inspection of a placard, museumgoers will learn how “The designer routinely sketched storyboards for runway shows, unfolding like a string of paper dolls, charts each model’s ensemble and role as a director might map out a film frame by frame.”

Mizrahi’s 235-page accompanying Yale University-published book features photos by Jason Frank Rothenberg and an essay by Lynn Yaeger. Writing presents another ongoing challenge. “I’ve agreed to do a memoir for next year or whenever the hell I finish that. Hopefully, it will be published in 2017. That sounds like it’s due tomorrow,” he said. “I think writing is my ultimate goal. When I’m a very old man, I think I’m going to sit in a room and write. I’m not sure what. I’m going to take piano lessons again as a kid and write.

“Les Mizrahi was a big writing project. It took me years. I don’t think writing comes easily. I don’t. And I totally understand why all writers are kind of drunks. Because you really do have to go away and be alone. It’s really hard, but great — very rewarding,” he said.

Getting back into housewares — which he has done at the high-end and mass level — is also on his check list. “You know, I don’t think something’s better because it’s expensive. That’s been the whole premise of my career — the quality of a thought, the quality of an idea weighs the same whether its costs $7,000 or $7, right?” he said.

The last room of “Unruly History” features three screens flashing Mizrahi’s childhood movies, his “60 Minutes” and “Charlie Rose” show interviews, runway show footage and other celluloid inspirations. A clip of Linda Evangelista taking a turn in a leather jacket is a favorite flashback from 1988. “There was this hip-hop thing going on that I absolutely adored and took a lot from. In that clip, you can see the brass knuckles that I made. I couldn’t find those anywhere. I literally called and e-mailed everyone I knew,” he said. “I made those damn things with my f–king hands — the casting of them, the pavéing of them, it was one step at a time with brass knuckles. And now everywhere you look, there are brass knuckles.”