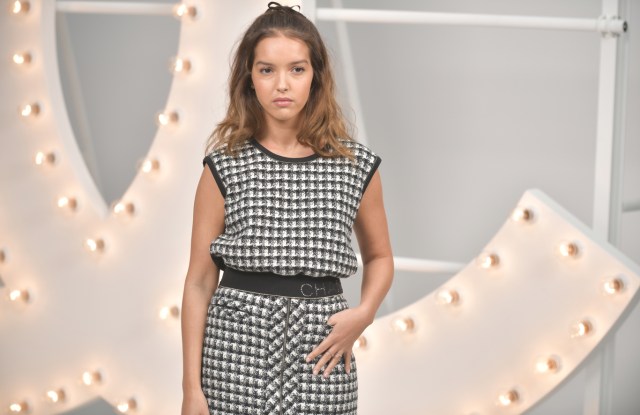 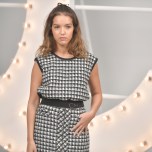 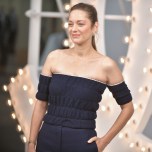 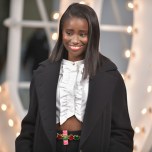 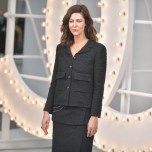 STAND UP: The Chanel set was a towering sign spelling out the house name, outlined in lights like an old-fashioned cinema house — naturally, thoughts wandered to the state of the film industry.

“We can’t let ourselves be knocked down, right? We absolutely have to insist on the necessity of what we do — we are guardians of culture, and of democracy,” said Isabelle Adjani. The actress noted she had recently run across a poll that indicated people considered cinema as one of least necessary activities.

“I thought to myself, we musn’t allow society to slip into accepting such a ridiculous notion,” she said, her blue eyes flashing.

The actress plays a theater director in the upcoming film “Soeurs,” directed by Yamina Benguigui, a lively movie that takes place in France and Algeria, telling the story of three sisters and how they each integrated differently.

Reflecting on the Chanel lineup, the actress said she found it reflected a certain freedom, and detected a bohemian side to it —  suitable for artists, she suggested.

“I love this spirit, this timid eccentricity,” she said.

Lyna Khoudri had an extra appreciation for the craftsmanship of French luxury fashion, thanks to her role in an upcoming film called “Haute Couture.”

“It takes place inside the workshops,” she said, noting she learned the basics of sewing, but mostly gained respect for the years of work that it takes to build the craftsmanship skills of the “petites mains,” as embroiderers are called.

“I don’t have any pretensions of saying I am capable of doing it,” she added.

She also plays a militant student activist in the upcoming Wes Anderson film “The French Dispatch.” Is that a character she resembles?

“Sometimes — not always — but sometimes, yes,” she said with a grin.

Work is picking back up in the industry, she observed.

“Slowly, but we’re here. We’re talking — with masks. I have confidence,” she said.

Karidja Touré said she felt lucky not to be in the middle of filming when the lockdowns went into place. She plays the mistress of a married man in a comedy film scheduled to be released in November — it was originally meant to come out in April. She has started taking part in castings and is noting a pickup in activity, and has a long-form movie project next year.

“Activity is starting to pick up, little by little,” she said.