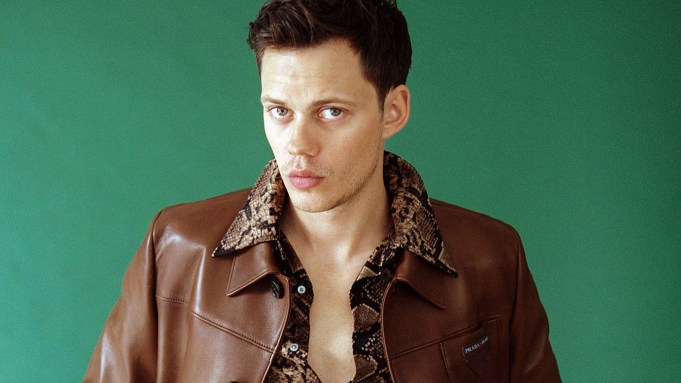 Bill Skarsgård recently watched “Keeping Up With the Kardashians” for the first time. He was on a plane; you know how that sort of thing goes. As he mulls over the widespread fascination with America’s first family of reality television, a lightbulb goes off: what about “Keeping Up With the Skarsgårds?” It’s certainly getting harder to keep track of the extended family of Swedish actors: father Stellan and older brother Alexander have already paved the way in Hollywood, and brothers Gustaf and Valter are actors as well. He pantomimes a phone call with one of his seven siblings, tapping into his inner Khloé.

Although he was nine when he first started acting professionally (a Swedish thriller, which starred Alexander), the “It” franchise marks Skarsgård’s true Hollywood breakout. On Sept. 6, he returns to theater screens for “It Chapter Two.”

I don’t see it as the Pennywise monster, I see myself in a clown face.

When the first installment premiered in September 2017, the film went on to become the highest-grossing R-rated horror film of all time. With an A-list cast attached to the sequel — Jessica Chastain, James McAvoy, Bill Hader — portraying the adult versions of the Losers Club children, expectations are high for the second film, and it’s likely that even more eyes will be on Skarsgård.

The final fight looms large for the film adaptation of Stephen King’s novel. In King’s story, Skarsgård’s Pennywise returns to wreak havoc every 27 years; indeed, it was 27 years between Tim Curry’s 1990 television portrayal of the character and Skarsgård’s. This time around, the monster was less dormant before returning for its encore.

Whereas he spent a lot of time experimenting with various laughs, physicalities and faces before the first shoot, for the second installment Skarsgård was thrust back into the deranged clown’s world with little warning.

“I think the effects crew was, like, ‘Whoa, what the f–k.’ When you do the digital thing you only have dots on your face so you look like yourself,” says the 29-year-old actor, lanky and lounged on a couch wearing a floral button-up short-sleeve shirt and dark jeans. “It’s almost more jarring seeing me doing Pennywise looking like myself because it looks like a complete maniac. It’s almost like the makeup translates onto the character. Without the makeup I just look like a human being that’s not normal whatsoever.”

Skarsgård credits his costume and makeup team — “the Pennywise unit” — for the hours of work that went into his physical transformation on-set, particularly the two artists applying his prosthetics each day: Sean Sansom and Shane Zander.

Zander, on-set prosthetic makeup effects key artist, was with Skarsgård from Day One of test makeup to the last of the shoots for the second film: more than 50 applications of Pennywise.

“Bill is Pennywise. Once we sat him down for two hours and applied all the makeup, he transforms. It is amazing to watch him work. He gets into the character so well. Sometimes he’s outright scary as hell,” Zander says. “We were used to seeing him, but a lot of the crew members and other actors were genuinely freaked out when they saw him. Bill is a tall guy, and put him in a creepy clown costume and face; that’s nightmare fuel there,” he adds. “He would Skype with his brothers quite often while in the makeup and they would really get a kick out of it.”

There’s one person who’s definitely not freaked out by Pennywise, and that person is Skarsgård himself.

“I see myself,” says the actor. “I’m so familiar with the look of the character, too, that its like, I don’t see it as the Pennywise monster, I see myself in a clown face.”

Others see Pennywise, whether he’s in makeup or not. And turns out, it’s a hit with Customs.

“I flew in from Stockholm last night and as I walked in through Customs — you know when you fill out the Customs form, and then you go through the Customs and then you pick up your luggage and then you walk through and have to hand in the little — he was like, ‘Neeeext. Thought so. They all float down here, am I right, man?'” a reference to Skarsgård’s most famous line in the story. “With his big thick New York accent.”

MORE: Click Here All the Photos of Bill Skarsgård from WWD’s Exclusive Shoot

He’s not phased, but Skarsgård, who lives in Sweden with his girlfriend and daughter, is more accustomed to a low-key existence.

“People tend to leave you alone in Sweden. Especially in New York, there’s a sense of this enthusiasm that you don’t find in Sweden,” he says. “Also in Stockholm, people just expect me to be there probably.”

Well, expect to be seeing Skarsgård around even more, at least on the big screen. Skarsgård also appears as the lead in “Villains” out in September, a small budget dark comedy that premiered at SXSW in March. Whereas “It” was a big studio undertaking with special effects, “Villains” was a more modest production by two young directors whose script had landed on the “blacklist” — a selection of the industry’s best unproduced screenplays.

“We had only ever seen him in the context of horrors or thrillers, the scary clown in ‘It’ or something where he’s playing a werewolf or vampire,” says the writer-director duo, Robert Olsen and Dan Berk. “We were, like, ‘Is he capable of being this charismatic and lovely of a character?'” Turns out, yes. “We felt like we could at the same time show the world what Bill Skarsgård is capable of, which we think is being a Hollywood leading man and he’s starting to really show that now.”

After Skarsgård’s brief layover in New York in mid July — he was particularly excited about being upgraded to a balcony room at his hotel downtown — Skarsgård was headed to Utah to film “Nine Days” with first-time feature director Edson Oda, opposite Winston Duke and Zazie Beetz. After that, it was back to Sweden for his sister’s wedding in August before jumping full force into fall and the “It” press tour. He has a few films in post production, too; pretty soon, Pennywise will finally be left behind, for good.

Skarsgård himself isn’t a horror film fan, though he offers an addendum: He likes good movies. And sometimes good movies happen to be scary.

“I’ve never been a fan of the feeling of, ugh, like I’m about to pop a balloon, I’m about to pop a balloon,” Skarsgård says; coincidentally, red balloons mark his character’s presence in “It.” “That’s the jump scare thing, you know it’s like, eeek, I’m going to jump — but I don’t want to jump. At the very end of most horror films I’m never scared.”

Will Poulter is Scared of the Sun After ‘Midsommar’

Video: Dapper Dan Goes back to His Roots in Harlem