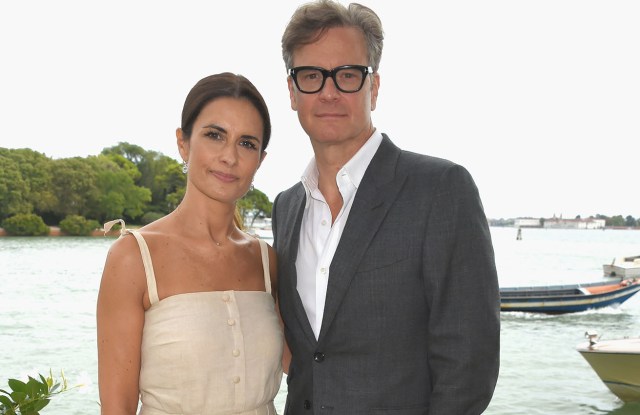 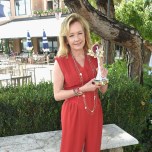 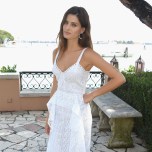 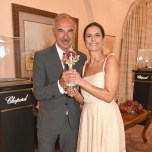 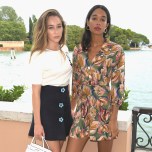 VENICE — “Oscars, make room for us.” Smiling and joking with guests, Livia Firth presented the statuette designed for the Green Carpet Fashion Awards, Italia, in Venice on Friday, during the city’s Film Festival at the storied Hotel Cipriani.

“The Oscar is a man, and I love that this award [represents] a woman. It had to be a woman if you think of all the women employed in the manufacturing pipeline from Italy to around the world, from Bangladesh to Cambodia,” said Firth, the founder and creative director of Eco.Age, who masterminded the awards with the Italian Camera Nazionale della Moda. The awards will be bestowed in Milan during Fashion Week on Sept. 24 at the La Scala theater.

Designed by Chopard copresident and creative director Caroline Scheufele, the statuette is crafted from ethical gold-certified Fairmined extracted by artisanal and small-scale miners as part of the jewelry firm’s Journey to Sustainable Luxury. The top part of the statuette shows a representation of a pomegranate. Patrick Kinmoth, who is creating a garden installation in front of La Scala to be unveiled on Sept. 20, said the pomegranate is believed “to be the fruit of knowledge in the garden of Eden, while others praise it for its diverse uses…from permanent black ink, thanks to its tannin-rich skin, to the medicinal properties of its peel, pulp and seeds. For us it represents imaginative abundance together with indisputable beauty, inventive usefulness and sustainability.”

Firth also revealed the name of the first-ever recipient of one of the awards: Chiara Vigo. Based on the Italian island of Sardinia, Vigo is thought to be the last of her generation to harvest the precious sea silk, known as Bisso, and spin it. “This comes from the saliva of mussels when they are attacked by the octopus,” explained Firth. “It’s a silk that is more precious than gold.” Vigo will receive the Green Carpet Fashion Awards Artisanal Laureate 2017.

Carlo Capasa, president of the Italian fashion body, said prizes will be bestowed in 10 categories. “It’s great to add impulse to such a project. The awards place the people that produce and work in fashion at the center of it all. We hope this pushes people to think about social sustainability.”  The awards will also contribute to make sustainability “less esoteric,” he contended.  Capasa noted that Venice and the festival were yet another tribute to Italian excellence and therefore an appropriate window to present the statuette.

“Designing the award was an honor that would be impossible to pass up,” said Scheufele. “These awards are closely aligned with our values at Chopard, especially with the Journey to Sustainable Luxury and the celebration of the artisans involved in all levels of our supply chains. It was only right that the statuette should reflect the values at the heart of the event. As Livia told me when we first met, it’s a long journey, things can’t be changed in one day.”

“Yes, I said Rome was not built in a day and she’s almost building Rome,” chimed in Firth, speaking of the project, spanning five years so far. “Chopard has never stopped investing in sustainability.”

Firth said the Green Carpet Fashion Award was in honor of the late Vogue Italia editor in chief Franca Sozzani, who was to be celebrated later in the evening with the inaugural award in her name. As reported, the first recipient is Julianne Moore. Several of the guests at Cipriani were expected later at the Lido for the Franca Sozzani ceremony: Colin Firth, who will present the award to his costar in “A Single Man;”  Valentino’s Pierpaolo Piccioli and Stefano Sassi; Alberta Ferretti; Moncler’s Remo Ruffini; Sozzani’s son Francesco Carrozzini and his fiancée Bee Shaffer; Carla Sozzani, and her niece Sara Sozzani Maino.

The Green Carpet Fashion Awards, Italia, are supported by the Ministry of Economic Development, the Italian Trade Agency and the city of Milan.