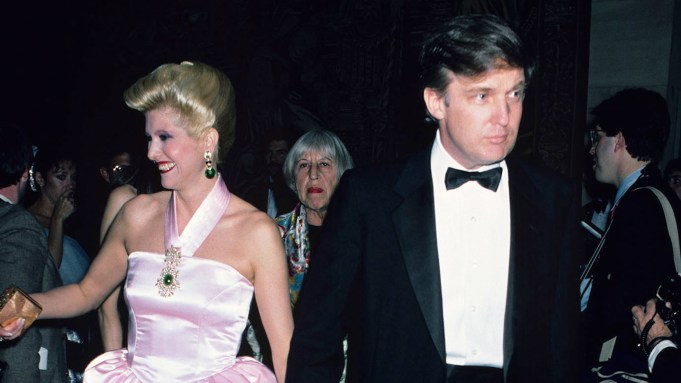 Ivana Trump, the first wife of the former president, died Thursday at her home in New York City at the age of 73.

Her 15-year marriage to Donald Trump began in 1977, a year after the Czechoslovakia-born model first met him at the Montreal Olympics. The couple have three children — Donald Jr., Ivanka and Eric. The Trump family announced her death Thursday in a statement.

A telegenic personality in her own right, Trump never eschewed her married name even after the couple’s much-publicized divorce in 1992. With her statuesque physique, tussled blonde hair and designer clothes, Trump and her big-wheeling husband personified for some the high-flying ’80s in New York City. Steely, tough and driven, she took on the role of chief executive officer of Trump’s hotel and casino operations in 1985.  She once explained to WWD, “I like to live. I like to dance. I like entertainment and the family. I like to enjoy. And knock on wood — it’s nice that I can live that way. And if it all goes away, Donald and me, we would survive. We have two hands, we can work.”

And work she did. In 1986, gross income for Trump Castle in Atlantic City was $280 million. Not a gambler behind the occasional $5 bet, she questioned those who did, suggesting real gamblers buy a plane or painting for $1 million instead.

Born Ivana Zelnickova, she was the daughter of an electrical engineer father and a telephone operator mother. Raised in a middle-class setting, she said she worked hard at school and learned the importance of discipline and team play through sports. Direct and concise with her heavy accent, Ivana Trump was known to be a straight-talking woman who seldom left others wondering about her opinions. A former competitive skier, she maintained a trim frame that bode well for work as a model in the ’70s.

She first left the then-Communist Czechoslovakia and immigrated to Canada in 1971 after marrying the Austrian ski instructor Alfred Winklmayr to attain Austrian citizenship. The couple divorced in 1973. Describing her first encounter with Donald Trump at the Winter Olympics in Montreal, she cited his “incredible potential,” street smarts, energy and business instincts in a 1987 interview with WWD.

Trump was also a major fashion force as a style setter, shopper, designer in her own right and a champion of other designers. She even walked in a few including modeling a finale look for New York-based designer Dennis Basso. When Trump first proclaimed to WWD “I want to be a designer,” WWD made that headline news, “Ivana Be a Designer.” He recalled inviting her and her then husband to his first runway fashion show in 1983 at the Regency Hotel. “She loved fashion. She was a gorgeous 33-year-old woman at the height of the ’80s,” Basso said.

That invitation led to a decades-long friendship that included many years of vacationing together in the Mediterranean in the summer, weekends in New England, cozy dinners in Manhattan and winter getaways in Palm Beach. “She was a client who became a close and very dear friend. I know her differently than a lot of people. I know her as the quintessential, perfect, strict mother. She ran a tight European household. Manners were important. Homework was important — everything was important,” Basso said. “A lot of the world was unaware that behind all of the glamour and the glitz of the ’80s and the ’90s, there was this part of her. Besides being a shrewd businesswoman and entrepreneur, she was really a frontrunner with the women’s lib [movement]. She believed in equal rights for women and standing on her own. She wasn’t afraid to give her opinion and she wasn’t afraid to be in a man’s world when it came to business.”

Attending a Dennis Basso show in 2016, she predicted her ex-husband would be elected president. She said at that time, “We speak but he does what he wants to do. But he can handle it. I don’t really offer advice. He’s doing his own thing. Nobody can tell him anything.” She also explained how she gave him the nickname “The Donald.” When they wed, she didn’t speak proper English so she put “the” in front of everything that she thought was important, Trump told WWD. That caught on so strong that the newspapers took to the nickname, she recalled with a laugh.

During that election year, the former Mrs. Trump wasn’t losing any sleep about the possibility of missing out in being the first lady of the U.S. After gamely posing for an Instagram photo with a potato designed to look like a pirate, she said, “I really don’t think about it and I really don’t care. My life is good as it is. I don’t want to disturb it.”

Not club people, Trump described herself and her second husband as down-to-earth. In the late ’80s, they were still investing in the businesses even with the houses and the yacht. Even the 118-room Mar-a-Lago in Palm Beach had not changed their lives, she said at that time. “I haven’t become more spoiled or snappish,” Trump said. “…We don’t need to prove anything to anybody. Now I’m in my prime. You laugh, you survive.”

During her marriage to Trump, she also ran the Trump Hotel and reeled in numerous big-name designers to stage their runway shows there including Carolina Herrera, Oscar de la Renta, Arnold Scaasi and Albert Nixon among others. Many of the leading designers were also friends. Having once been a showroom model for Grosvenor Furs in Montreal, she sympathized with designers, “knowing how hard it is to put on a show with the expense and something going wrong.”

Andrew Burnstine, whose mother ran the Manhattan premiere boutique Martha’s, recalled Thursday meeting a chic swimsuit and sarong-clad Trump and her then husband at The Breakers Hotel in the early ’80s. At that time, Trump was keen to introduce luxury retail to his new Trump Tower and Ivana Trump advised that if he wanted the best, Martha would fit the bill. The fashion retailer wound up opening three stores in Trump Tower. Trump was known simply as “IT” by office staff in Trump Tower. During the build-out, Ivana Trump would drop by to see how things were going and she later previewed trunk shows and bought designs from favorite designers like Bill Blass, James Galanos and Andre Laug. “The Martha boutiques at Trump Tower had not only the sophistication and elegance of Martha itself, but also the eye of what could be from Ivana herself,” Burnstine said.

One thing she learned from her second husband was to surround herself with top talent. “Some people are threatened by talent; I am not. My biggest challenge is to motivate,” she told WWD in 1987. Even at that time, she faced questions about Donald Trump running for president. “With the presidential race, I never say never,” she said. “Political life might be great for a man because it means power, success and money. These are the three priorities in a man’s life. For a man, it’s the ultimate to be president. For the woman, it’s a lonely life.”

Trump spoke openly about growing up in Czechoslovakia where no one ever gave you anything for free, not that it was the case anywhere else either. She attended Charles University and earned a master’s degree. The multilingual mother considered herself a decent French cook and was unabashed about her domestic skills that included ironing her husband’s shirts. She also allowed that a certain ego was needed if you want to achieve something. Unmissable with her red Mercedes and “IVANA” license plate, Trump understood how the publicity was wonderful for the family’s business.

By her own account in 1987, she would simply die if she were only a social lady. “For some women, the biggest ecstasy of the day is getting dressed for dinner. I would climb the four walls if I had only that.”

Not one to fade into obscurity, Ivana Trump like her husband was a frontrunner in the field of self-branding. As a divorcee she built her own career through QVC London and the Home Shopping Network selling signature clothing, costume jewelry and beauty products. An early influencer, if you will, Trump had her fits and starts in business and in marriage but she always put her family first as evidenced by her book “Raising Trump” in 2017.

Trump married a third time to Riccardo Mazzucchelli. After that marriage ended in divorce in 1997, she wed Rossano Rubicondi a decade later. But Trump was perennially linked to her second husband.

In addition to her three children, she is survived by her mother Marie Zelnickova.

PHOTOS: Ivana Trump Celebrating the Fashion Community Throughout The Years