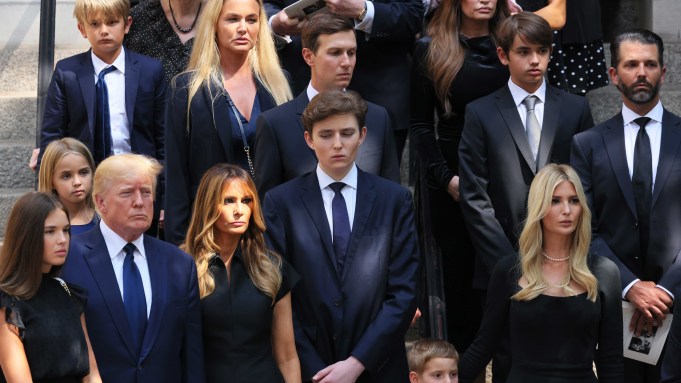 NEW YORK — The Trump family was out in force Wednesday afternoon at the funeral mass for Ivana Trump, who died July 14 at the age of 73.

Inside the Church of St. Vincent Ferrer on Manhattan’s Upper East Side, about 400 friends and relatives gathered to pay tribute to the charismatic athlete, model and businesswoman, who prized family above all as the measurement of personal success. While the two-hour plus ceremonial funeral mass vacillated from the serene to amusing depending on the speakers, the street-front scene was considerably more chaotic.

Hours before guests started to arrive, the New York Police Department set up metal barricades securing the surrounding blocks from vehicular traffic and pedestrians. Dozens of photographers, cameramen and members of the media were positioned on a few flatbed trucks on the west side of Lexington Avenue across the street from the Catholic church’s main entrance.

Despite having married four times and navigated the speed bumps and road blocks of being a pioneering female executive and an adoring, but strict mother, Trump was forever linked to her second husband, Donald.

But at Wednesday’s funeral, the former president played an uncharacteristically silent role, leaving the tributes to the three children he had with his late ex-wife — Eric, Ivanka and Donald Jr. “The Donald,” as Ivana Trump nicknamed him, entered the church from the wings after the pallbearers and the family procession. He and his wife Melania sat with their son Barron Trump beside another one of his children, Tiffany, and her fiancé, Michael Boulos. Secret Service agents kept a watchful eye nearby.

Across the aisle, the pews at the front of the church were lined by Eric Trump, his wife Lara and their towheaded children; Ivanka Trump, her husband Jared Kushner, and their two sons, and Donald Jr. His ex-wife Vanessa and their brood of youngsters were also up front, as was his current girlfriend Kimberly Guilfoyle. The blended American family was undeniable, but what the Trump trio of children focused on was their mother’s grit, determination and zeal for life.

In keeping with the priest’s introductory caution that the day was not one for publicity, politics or photographs, the funeral was largely apolitical — unless you count Donald Trump Jr.’s belief in the benefits of a good parental spanking as a hot-button issue.

All in all, though, the tributes delivered recollections of Ivana Trump’s high-flying and hard-charging life. At times, it didn’t just lay bare her children’s grief, but the grief they gave her with childhood antics. Lighthearted as some moments were, there were also more emotional ones, with some family members — including Ivanka Trump — speaking haltingly at times. Several guests also cried openly at different parts of the service and others periodically wiped away tears.

However ordinary such revelations are at many family funerals, there were also signs of Trump’s oversized life. Namely a placard of her 1992 Vanity Fair cover emblazoned with “Ivana Be a Star!” was prominently positioned in the front of the church. Giant orbs of hundreds of enormous red roses were stationed inside the church’s entrance, on the altar and near the vestibule. A handful of nuns sat during the mass and several others could be seen peering from vestibules above through stained glass windows.

They weren’t the only standouts amid attendees, most of whom dressed respectfully in black. Fashion designer Zang Toi sported barrettes and an above-the knee black kilt and a shirtless Marc Bouwer embellished his double-breasted suit with a giant rhinestone necklace. Other fashion industry representatives included Paul Margolin; Camilla Olsson, and the Council of Fashion Designers of America’s Marc Karimzadeh with Whitney Robinson.

One of Trump’s longtime friends, designer Dennis Basso, helped set the tone of the event as the lead-off speaker. He explained how he had considered what route to take: “This is tragic. I could go sad, melancholy and then I thought, ‘That’s not possible. My good friend up there is saying, ‘Go fabulous.’”

Basso recalled meeting Trump at his first fashion show in 1983 and how she turned up unexpectedly at his office the next morning and ordered seven coats that were to be delivered to Trump Tower and billed to “The Donald.” Basso said, “I couldn’t believe it. I had just gone into business.”

That exchange led to a decades-long friendship with shared parties, dinners and galas. “I didn’t even realize that she became my muse — this amazing woman that was working hard at The Plaza, in Atlantic City and doing everything. At the time, she was expecting Eric. That didn’t stop her for one minute. She was go, go, go,” Basso said.

Beyond their friendship, Basso emphasized how Trump influenced other women at the advent of the Women’s Liberation movement and was not afraid to be important or competitive. He recalled phoning Trump after USA Today ranked the five most recognizable fashion icons years ago: Queen Elizabeth, Jackie Onassis, Elizabeth Taylor, Brooke Shields and Ivana Trump. Basso said Trump responded in truly Ivana fashion asking, “Was that the way the list was numbered exactly?”

After Trump’s longtime assistant Dorothy Curry offered lyrical remarks, Eric Trump then described his mother as “an icon of her generation who could beat any man on the slopes or any woman on the runway.” He said, “If you put Joan Rivers, Lindsey Vonn and Claudia Schiffer [together] you might scratch the surface of creating another Ivana Trump…she had strength, she had beauty and she had grit. She could tell the most intimidating person in the world to go pound sand,” adding that those who knew her, knew she would put it another way.

Trump also spoke of how his mother supported his father with massive conviction and back-up in his presidential bid, declaring, “That man will make a great blanking president. You just watch that. They loved each other, they respected each other and they fought for one another in ways that most people could never imagine. He had her [third] wedding at his house [the 318-room manse Mar-a-Lago]. How cool is that?”

Not a fan of the grandmother moniker, she scolded two of her grandchildren as toddlers for calling her that, he said. He told the crowd that the night before his mother died, she had told him she was going to live to be 120 years old. She said, “Only the good die young.’”

Ivanka Trump highlighted not just her mother’s professional accomplishments but also her gentle and caring ways, and commitment to family. A proven competitive skier, Ivana Trump taught her children how to ski and ensured that they were first on the mountain when the lifts opened. Known to encourage them to test their limits, Trump took them traveling each summer to explore new cultures and expand their minds. Out at sea, she taught them to spear fish. On land, there were bonfires for s’mores for dinner in the dog days of summer, Ivanka Trump said.

Describing how her mother, who was raised in Communist Czechoslovakia, realized the American dream, Ivanka Trump said she became an exceptional businesswoman and a devoted mother. “She was the queen of Manhattan in the ’80s and reigned not just over galas but also over work. But life had its challenges. She constantly found new adventures…”

Ivanka Trump said her mother was “pure fun and pure sunshine with more energy than most people half her age.” At the age of 20 one summer, she was teased for leaving a St. Tropez party at 1 a.m. by her mother, who stayed until 4 a.m. “She would often chide me that my miniskirts weren’t mini enough. ‘Flaunt them while you’ve got them,’ she would always say,” recalled Ivanka Trump, adding that she was also advised to study hard, work hard, conduct herself with dignity and good manners and “to never, ever marry a man with a bad back.’ It took me years to understand the last one.”

Donald Trump Jr. emphasized how growing up under the Iron Curtain did not deter his mother and added, “There was nothing that she could not achieve, no obstacle that she could not surmount. And she knew it because that’s the way she was raised…She was a woman ahead of her times shattering gender norms before that was really a thing. But today that is common practice…”

Ivana Trump could entertain and enthrall royalty for hours on end and five minutes later could make a group of construction workers blush, Donald Trump Jr. said. “She grew up hard and she never forgot what that was like. She brought that mentality to every aspect of her life, especially mothering.”

He also delivered some of the lighter moments, recalling how after he acted up during a family dinner at Gosman’s in Montauk with Donald Trump’s parents, his mother spanked him in the restaurant’s restroom. That punishment was only rivaled after Ivanka Trump damaged a beautiful and rather pricey Baccarat chandelier in their house with a beach ball and then managed to quickly convince their mother that Donald Jr. was to blame, he said. Unaware of what had happened, after receiving his “wooden spoon remedy,” he denied any involvement which only infuriated his mother, he said. “…Now I was also lying to her, which was much, much worse. By the time she figured out it was in fact not me, my bum was red yet again and she was too tired to deal with Ivanka,” Donald Jr. Trump said.

More ribbing was faced though early on at boarding school, where students had happened to read an article about his mother ordering red wine at Taco Bell after dropping him off, he said. “It was almost as though the media frenzy surrounding you and dad taking me to stock up on supplies at Kmart in Pottstown, Pennsylvania was not enough of a bad experience. All kidding aside, Ivana Trump knew how to live and experienced all that the world has to offer. And she could do it all in high heels,” Donald Trump Jr. said.

PHOTOS: Ivana Trump Celebrating the Fashion Community Through the Years