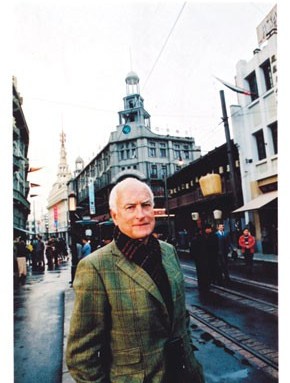 Unlike the perfectly appointed sets that are synonymous with Merchant-Ivory films, James Ivory’s 57th Street office is a hodgepodge of random keepsakes — an oversize “Gone With the Wind” painting, a handsome trunk, a movie poster from “Somebody Up There Likes Me” signed by Paul Newman and a framed sketch of a tree that reads “Merchant Ivory, We Are Proud of Our Roots.” It’s the kind of collection that builds up after 51 years in the business.

And it’s a career that continues even three years after the death of Ivory’s longtime partner and collaborator Ismail Merchant. In May, Merchant-Ivory released “Before the Rains,” and this fall, Ivory will release his latest directorial project, “The City of Your Final Destination,” starring Anthony Hopkins, Laura Linney and Charlotte Gainsbourg.

Soft-spoken and casually dressed, the filmmaker looks more a friendly-uncle-of-a-certain-age than an Oscar-nominated director. He primarily travels for work; the closest he comes to vacation is catching up with old friends — the type to criticize specific film scenes 10 years after the fact — in his native Oregon. But while Ivory will take an earful from a pal, however belatedly, he is less inclined to keep up with the critics. “You can’t,” he says, “because you’d be going around in circles, as they are.”

He is equally relaxed with what the audience takes away from his imagery. “Everybody gets different things from films. Sometimes the most important thing they don’t get at all. But that doesn’t matter because they get other things.”

“The City of Your Final Destination,” based on the Peter Cameron novel of the same name, revisits a theme familiar from other Merchant-Ivory works including “A Room With a View,” “Maurice” and “The Bostonians.” Shot in Argentina, the film centers on a young American who is trying to win over the heirs of a famous South American novelist so he can write an authorized biography. But an affair with the deceased’s mistress derails his plan.

“The big theme of it is not to live a life that you don’t want to live, if you can help it. That’s very much in the back of a lot of our films,” Ivory says. “A lot of people I think fall into that pattern. Sometimes they need something kind of explosive to get them out of it.”

The production hasn’t been without its headaches, though. Last year Merchant-Ivory settled a lawsuit with Hopkins, who claimed he had yet to be paid for his work. And in April, actress Susan Malick threatened to tie up the film’s release, arguing her $250,000 investment in the film was not repaid with interest as agreed, nor was she given an associate producer credit. Ivory declines comment other than to say the matter would not affect the movie’s opening.

But the legal troubles did little to tarnish Ivory’s solid reputation within the industry. Former New York Times film critic Janet Maslin says, “I have great admiration for his intellectual curiosity, courage and rare stature as a class act in a tricky business. Sometimes he gets pigeonholed as ‘literary’ in a pejorative sense. When you look at the work he’s done it certainly is literary, deeply so. And that’s a compliment.”

The Berkeley, Calif.-born Ivory’s passion for film began in high school, when he started to understand that movies were “really very much the work of a director helped by a lot of other useful types including actors.” Early on, he devoured foreign films, especially “Henry V” (with Laurence Olivier), Jean Cocteau’s “Beauty and the Beast” and Carl Dreyer’s “Day of Wrath.” Ivory still watches those movies every once in a while, and “sometimes I even steal a little bit and put it in one of our films,” he says, still loath to use the singular possessive when talking about the company.

Forty-seven years ago, Merchant and Ivory met through mutual friends at a New York screening. “He was my closest collaborator in filmmaking,” Ivory says. “We discussed everything. We had sort of a common goal, so when he died, that person wasn’t there any more,” he says. “I know he would disapprove of certain things, but he would approve of other things.”

For as plainspoken as Ivory is, Merchant was just as brash. As an NYU business school student, he once talked his way into a backstage Broadway chat with Paul Newman, even though they had never met. He also once posed as the Maharajah of Jaipur to pull off a shoot in the Trianon Palace Hotel in Versailles. Ivory wasn’t around for that escapade, but says he and Merchant faced plenty of successes and “big scrapes” during their shared career — numerous accolades, including Academy Awards, but also actors storming off sets, impetuous cameramen marooning shoots and prickly distributors and investors.

But Ivory perseveres. This winter, he will get behind the camera again for Horton Foote’s “The Widow Claire,” which Robert Altman was working on before his death. Warner Bros. has also recruited him for a movie about the renowned Indian mystic Krishnamurthy. Asked about the public’s thirst for spiritual guidance, Ivory says, “Most people are looking for direction. They may not admit it, but they are.”

A film adaptation of Shakespeare’s “Richard II” is another project he would like to get off the ground. And despite the challenges of shooting in a boat from sunlight until dusk, Ivory is eager to make a feature film in Venice. “As you get older, your ideas for making films probably get a little quirkier, a little more personal and perhaps a little harder to put over. But that doesn’t make them any less worth doing or make you like them any less,” he says, “just harder to sell them.”

“A lot of people think you must never compromise in moviemaking, but if you understood really how movies are made, virtually every act is some sort of compromise. You’re compromising with the weather, with some costume you don’t like, with a scene that doesn’t seem to go right,” says Ivory. “I mean, actually shooting a film, it’s just hundreds and hundreds and hundreds of small or great compromises until you put something together that is better than the sum of its parts.”