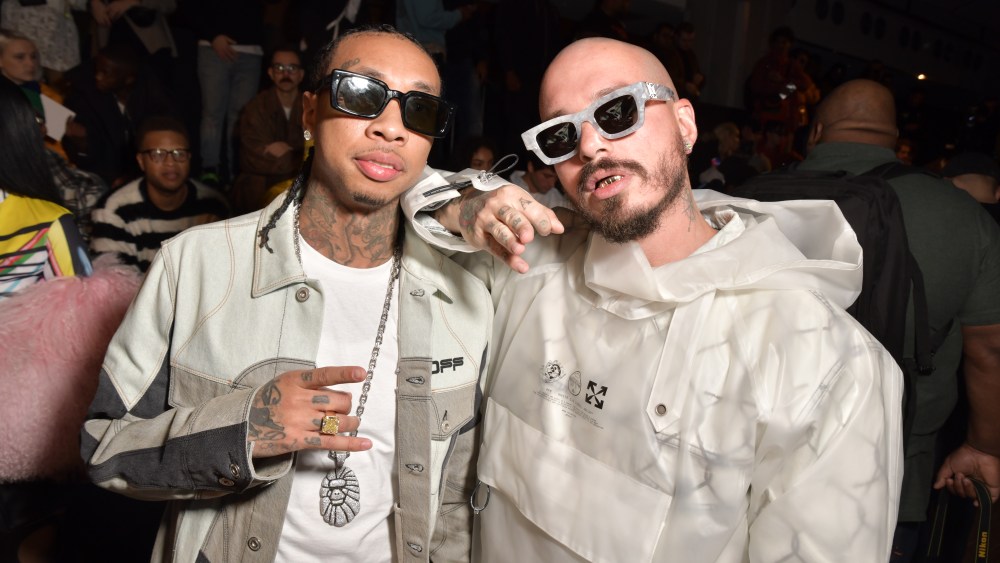 SURVIVAL TACTICS: What would you do in a tornado? The question was on everyone’s minds at the Off-White show, which carried a “Tornado Warning” theme.

For Heron Preston, survival mode means hunkering down with sustenance and loved ones.

“I would stock up on a bunch of snacks and booze and some weed, I would just get my puppies and my girlfriend and turn on some Netflix,” he laughed, before heading to his seat.

Perched next to Tyga, Aleali May flinched at the thought. Would she be scared?

Takashi Murakami takes storms seriously — tornadoes have arrived in his neighborhood in Japan in only the past two years.

“People are shocked,” he said. The artist, who is busy with animation projects, said he holes up in his studios when there are storm warnings.

Backstage, Billie Essco thought heading below ground might be a good idea.

“Oh, man, I don’t even know how you prepare for that. I think you just got to be in a basement or somewhere safe, let’s just say, away from windows,” he said, after a photo session with Westside Gunn and Virgil Abloh. This was his first trip to Paris, but he was surrounded by friends from his hometown, Buffalo, N.Y.  Not only Gunn, but also Audi Bizar, a model walking the show. They clapped each other on the back.

“Yo, this is crazy seeing you,” said Bizar, flashing his trademark grin, with a toothless gap.

“They could be pretty gnarly — natural disasters, but, hey, I’d stay inside,” said Luka Sabbat, who’s preparing artwork for the Frieze art fair in Los Angeles in February.

Sami Outalbali, who plays Rahim in season 2 of “Sex Education” on Netflix, thought he might duck underground.

“I would just hide myself, maybe, in a cave inside of the ground.”

J Balvin, while expressing respect for a tornado, said he’d try to have fun. The Colombian reggaeton singer is about to launch a new album, “Colores”

“You gotta be ready. It’s really colorful,” he said.

“It’s living art, it’s beautiful, like going to the theater,” said Balvin, after the show, which included a lively performance by tap artist Cartier Williams.