The new exhibition will be open through Sept. 5.

A Renaissance man, if ever there was one, Jack Lenor Larsen really delved into all different elements of art, design and fashion.

Six months after his death at the age of 93, a new exhibition, “Jack, Larger Than Life,” encapsulates how the globetrotting textile designer, weaver and collector put that into practice throughout his life. The show’s verdant setting of Longhouse Reserve, a 16-acre arts center with gardens and grounds in the Hamptons, is equally fitting, since Larsen designed it all. The show is on through Sept. 5.

Located in East Hampton’s Northwest Woods, LongHouse was first acquired by Larsen in 1975. Larsen had started spending time in the East End and weekending with friends at the start of his career in the late ’50s. He also lived on the property in order to relay a creative approach to a creative life. Built in 1986, LongHouse was inspired by a 7th-century Japanese Shinto shrine; the architect was Charles Forberg and the was builder Joe Tufariello. 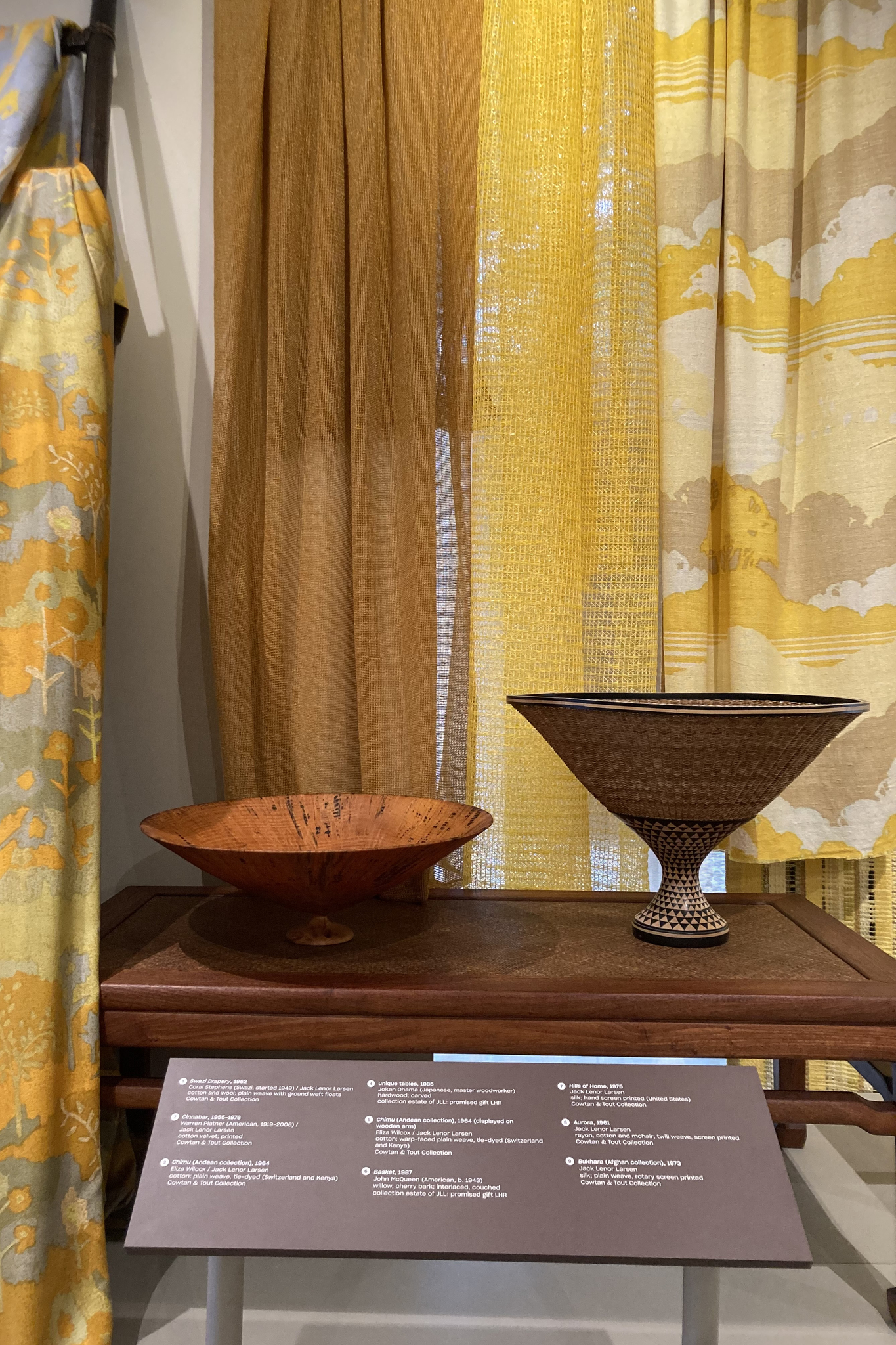 Larsen believed in the interconnectedness of design.  Photo Courtesy of LongHouse Reserve

Works by artist friends like Alfonso Ossorio and Dale Chihuly adorn the gardens. Among the 60-plus pieces currently on view are creations by Eric Fischl, Willem de Kooning, Yoko Ono, Will Ryman and other artists, as well as an installation by Buckminster Fuller and a site-specific work by Sol LeWitt.

But this summer’s main event is Larsen’s own innovative textiles, and the art and craft that he acquired, furniture and the clothing he collected and wore. With thousands of items to consider from LongHouse Reserve’s collection, curators Wendy van Deusen and Sherri Donghia decided on 100-plus. Interspersed with Larsen’s own innovative textiles, art and collectibles are photographs and favorite quotes of his. “Don’t be reverent. Be relevant. Keep on changing” were words to live by and so he did, according to the curators.

All in all, “Be open” was the message of Larsen’s life, they said. Always interested in the new, as an inveterate traveler, Larsen embraced change, however that might play out. But he also helped to preserve age-old indigenous patterns and techniques. Journeys to Japan, Thailand, Bali and other locales led to Larsen working with different artisans, as photos in the exhibition reveal. An early proponent of sustainability before it was coined as such, Larsen’s textiles were manufactured in more than 30 countries.

He started his signature company in 1952. Larsen was known for his award-winning fabrics made with natural fabrics in random repeats. He was one of only four Americans to have been honored with an exhibition at the Palais du Louvre. Along the way, he helped to put such artists on the map as Chunghi Choo and Dawn MacNutt — a few of the numerous creatives in the show. Visitors can eye metalwork vessels by Choo and a fiber sculpture by MacNutt in one montage.

A fervent collector of Wharton Esherick, Larsen’s first significant purchase from him — an angular table — is paired with a silvered glass cylinder that was given to Larsen for a milestone birthday by his friend and mentee Dale Chihuly. Larsen helped to steer Chihuly’s career. While at the Cranbrook Academy of Art, Larsen advised that Chihuly’s glass was much better than his weaving, and later introduced him to the leading glass artist Harvey Littleton, according to the curators, who often finished each other’s sentences in a recent interview. 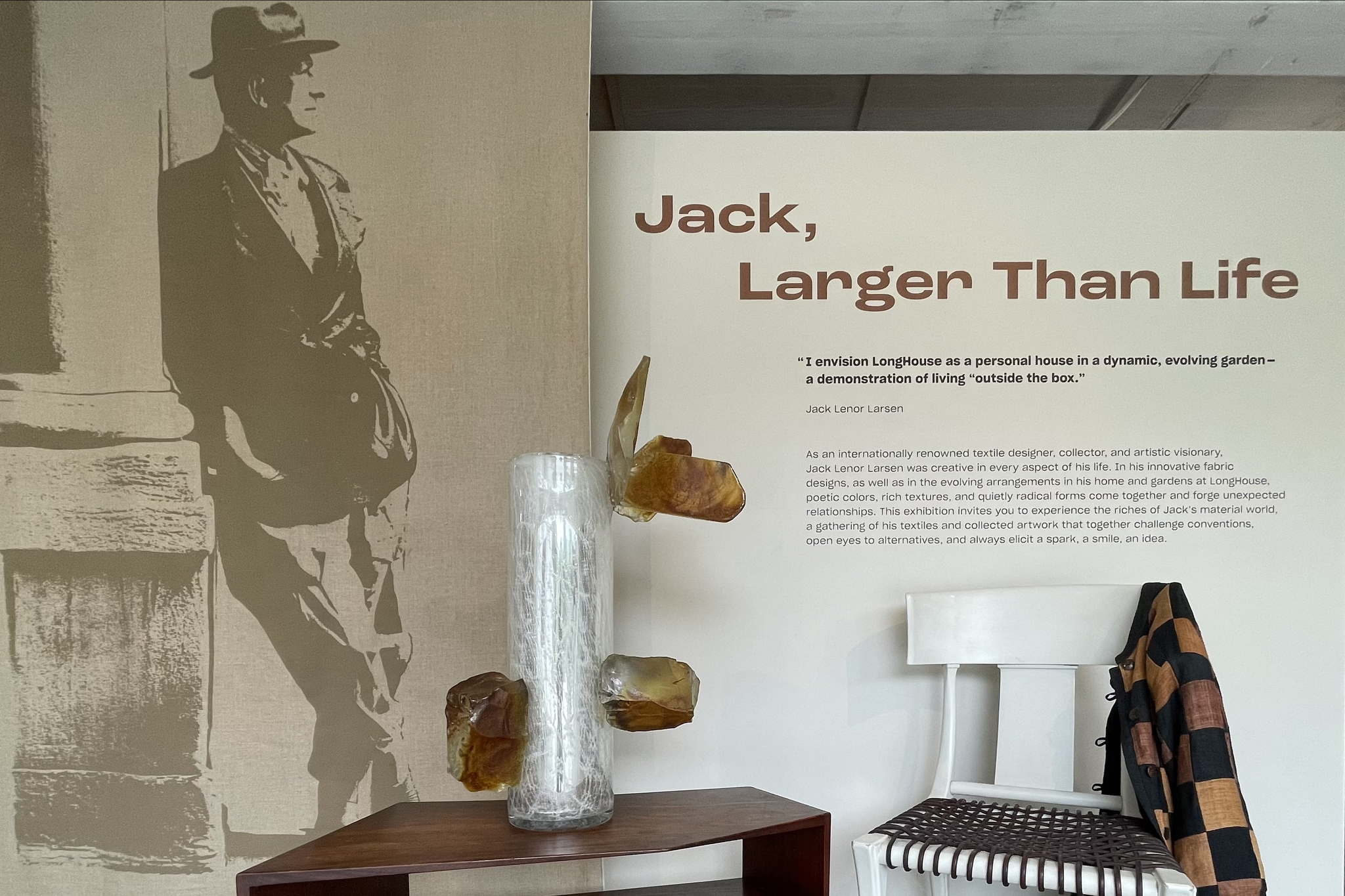 The creator and collector’s artistic life is examined in the new show.  Photo Courtesy of LongHouse Reserve

Van Deusen worked with Larsen for 23 years and Donghia initially knew him through the industry before teaming up with him and van Deusen for a 2014 exhibition at the LongHouse Reserve. The pair scouted out items for the show not wanting to display anything (including photographs) that had been featured in other shows. Visitors will get a grasp of his travels, work, house, wardrobe and style of entertaining.

”But they all overlapped and were intertwined like a tapestry,” van Deusen said. Each of the vignettes on view focuses on color stories that Larsen favored in his designs. A black-and-white story, for example, showcases clothing, sculpture, baskets, photographs, Larsen-made textiles and ones that he collected and used for inspiration. Along with the art, furniture, sculpture, wardrobe selections and other objects are 50 of Larsen’s textiles, including commissioned ones he had done for Lever House and the Phoenix Opera Company.

“The whole blurring of the lines between art, design, fashion, architecture and exterior design, Jack was a pioneer of all of that,” Donghia said. “He was always onto that and lived that. It is so relevant to design today and fashion, and where it’s going.” 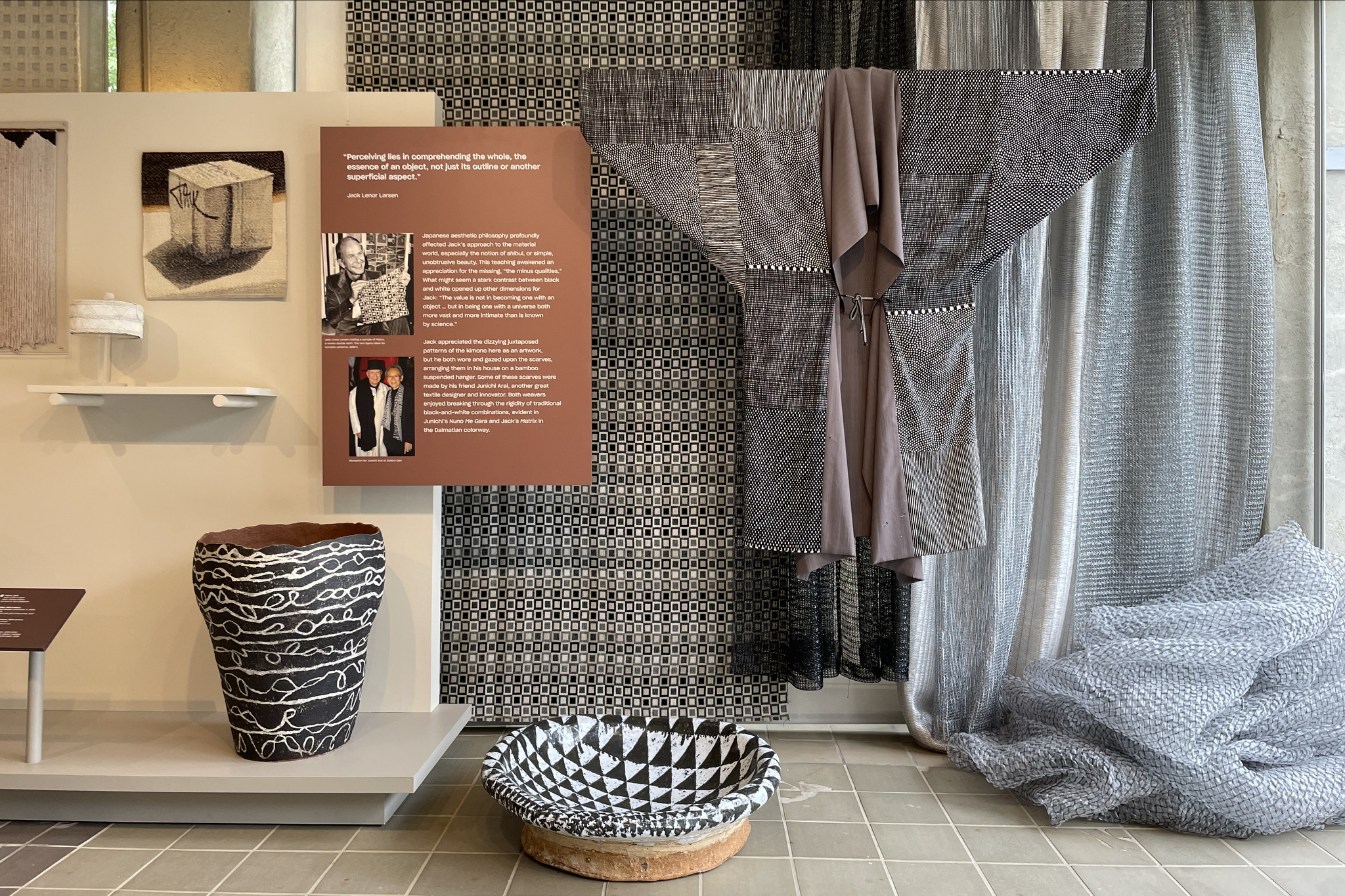 However prized his possessions may seem to many, Larsen loved to live amid his collections. Living with art and design every day meant not treating it like a museum. For Larsen, that meant eating on a Wharton Esherick table or using ceramic artist Jim Bacon’s plates. There is also a 25-foot wall of Larsen’s printed velvets.

Larsen also took great pride in his daily attire, choosing colors with flair, tactile fabrics and bright suede shoes. A photo in the exhibition depicts him wearing a chunkily woven Japanese fireman’s coat, blue and white indigo patchwork pants, with knee-high suede work boots and a hat. “And he was working [in that],” van Deusen said.

Donghia added, “He always had on an outfit that on someone else would look like a costume. But he had great height and could carry it off. It really did not look nutty. I really don’t think he stood there coordinating. It just came naturally,” adding the show is likely to inspire fashion designers and ones of other disciplines for years to come.

Easy care was essential though in order to live with the things that you love instead of stowing them away for special occasions. A short video of Larsen being interviewed will also give showgoers a sense of the gravitas of his career throughout his life. For many years, he was the only American textiles designer to be included with his European counterparts at the biannual Atmosphere show in Paris, Donghia said.

Larsen liked to say that he worked really well with architects, having first sold the fabrics that he wove to the more seasoned and established mid-century architects, who were seeking something new. He worked with Louis Khan and even taught him how to weave. Larsen’s weaver-like designs can also be seen in distinct areas of LongHouse’s gardens, which have a red one, a purple one and a white one.

At the time of his death, Larsen was crafting a book about all the famous people who he knew and worked with. There are plans to publish that in the future. In the meantime, a book about the exhibition will be offered in the coming weeks. The exhibition is expected to move onto other locations.