Jack Sock on the U.S. Open, Roger Federer and Life in Kansas City

The 22 year-old tennis player chatted with WWD ahead of competing in the US Open beginning August 31st. 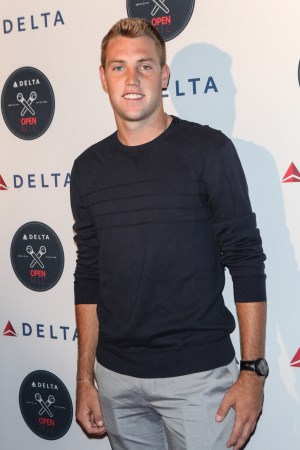 Though New Yorkers enjoyed a tennis preview at Wednesday’s Tommy Hilfiger/Rafael Nadal event, the U.S. Open officially begins Monday and rising star 22-year-old Jack Sock is poised to make his mark. Born in Lincoln, Neb., Sock is ranked 28th in the world by the Association of Tennis Professionals, the second-highest ranked American player, behind John Isner, and on Monday will face the Dominican Victor Estrella Burgos, ranked 50th. He’s had a busy summer of competing, which included playing Novak Djokovic for the first time, a personal highlight of his. Based between Kansas City, Mo., where he lives with his brother, and Tampa, Fla., he spoke with WWD on his way to the airport to catch a flight to New York.

WWD: How did you get your start with tennis?

Jack Sock: When I was eight I found my mom’s racquet in our house in Lincoln, and I started hitting against the garage door, and started denting it up pretty good. So my parents decided to put me in some clinics in the local racquet club, and after playing for a few years I fell in love with it. My parents sacrificed and decided that my mom, my brother and I would move to Kansas City for an academy and my dad stayed back in Lincoln for a job. He’s still there.

WWD: At what stage did you decide to turn professional?

J.S.: I went professional the summer after I graduated high school, in 2011. I was 18, I had been playing a few lower-level pro tournaments and then took it on full-time the summer after my senior year. I had always planned on going to college, pretty much my whole life, even still my junior and senior year of high school — I was planning on going to Nebraska where my brother was, he is two years older so he would’ve been a junior when I went, and my dad had played golf at Nebraska as well. It would’ve been a lot of fun, but opportunities took me in a different direction.

WWD: What is playing in the U.S. Open like?

J.S.: Being an American player, playing at home is fun. It’s pretty surreal, even though I’ve played now for four years and every year it still feels new and fresh and exciting. All the fans come in and it’s a pretty electric atmosphere. And to have all those people behind you and supporting you, for me it’s the best feeling you could ask for.

WWD: You had surgery in December — is it scary to take off so much time physically?

J.S.: It was on my pelvis — a lot of people thought it was my hip but for sure, anytime you have to step away for months at a time you miss the sport and miss being active. I actually had a similar surgery on my left side in 2012, so this time around I kind of knew how it would go. So it wasn’t as stressful this time but it’s definitely hard to be away from the sport and your career for months.

WWD: Who do you admire in the sport?

J.S.: Roger [Federer] is the ultimate role model. He goes about his business in the most professional way and he’s always nice and very kind to everyone in the locker room. He and I have had a few conversations over the years and spent some time together and he has always been a positive influence.

WWD: What do you like to do when off the court?

J.S.: I love to play golf, and then kind of just relax, and hang out with friends and family. I play “FIFA”; I like to play that with my friends. I just try to decompress and relax since I’m always on the road so when I have some downtime I try and make it R & R. A lot of my friends, people I went to high school with, have just graduated from college and a lot of them are back in Kansas City now working full-time, and so it’s nice to have some normalcy a bit, to text them and hang out with them. It’s pretty cool comparing what I’m doing [and] what they’re doing. It’s definitely refreshing and a nice change of pace when I come back to Kansas City.

J.S.: In Australia in 2013, I was playing mixed doubles with an Australian girl, Ash[leigh] Barty, and I got hit in the place you don’t want to be hit as a man, and it was uploaded on YouTube and definitely has a lot of views. It was embarrassing but something you’ve got to laugh at now.