Images from Jackson Wang and Shutterstock

“I mean, in [South] Korea, also in China, you know, everyone is doing a good job, although it’s a very unfortunate time around the world now….It’s all good here,” K-pop star Jackson Wang said in a phone interview. “Everything is under control.”

The message was loud and clear from China’s golden boy, born and raised in Hong Kong. The 25-year-old rapper, singer and dancer, who has more than 16 million Instagram followers, was calling from South Korea, his second home of sorts and where he’s been in self-quarantine due to the coronavirus.

“I feel like in every area, every place, the media is different, so sometimes it’s not always as it is, and the fact is everything is under control in China and [South] Korea,” he continued. While COVID-19 first emerged in Wuhan, China, affecting Asia at the start of the pandemic, the world has watched as both China and South Korea have significantly lowered the spread of the virus in their regions. “Although everything is under control, it’s getting better and better, but you know, everyone is still following the rules. We’re staying home. We’re washing our hands and paying attention…trying to stay clean and healthy.”

He’s passing the time by creating music and working with his team to reschedule his plans for the year. Like many artists — who are pushing back releases (Lady Gaga, HAIM) and postponing their tours (Billie Eilish, Harry Styles) — Wang is navigating uncharted territory as he aims to promote his work. He was due to visit the U.S. amid the release of his newest single, “100 Ways,” the first off of his yet-to-be-released sophomore endeavor. He’s hoping for the new record, a follow-up to last year’s “Mirrors,” to drop within the year, though it’s unclear at this point.

Coincidentally, the message behind the song — an upbeat, electronic tempo — is about “the elements that we can’t control in life.” In it, he’s dressed as a warrior. He continued, “Time and love would be two of the elements….In the music video, I’m this character. Basically, it’s about me coming back to life, traveling to find my true love and bring her back to life so that I can tell her that we should be together forever.”

It’s an ancient Chinese love story. And in the end, the protagonists are “happy to return to the afterlife together, having concurred time and having found love,” he added. The music video, directed by Daniel “Cloud” Campos and produced by Lostboy, features The Kinjaz, an Asian-American dance crew.

“I love learning about all the cultures around the world, and I also love sharing my own,” Wang shared. His English is nearly perfect, and along with Mandarin and Korean, he reportedly also speaks Cantonese and Shanghainese. “I’m always trying to connect the East and West, trying to connect the dots; that’s why a lot of my songs are in English. But if you see closely in my music videos, the visuals and everything, I’m always spreading my culture, the Asian culture, the Chinese culture. It’s a mixture, a balance between the two sides.

“At the end of the day, we’re living on earth,” he continued. “There’s West, East, South and North, but at the end of the day, we’re still in the same place. The main message that I’m trying to tell, through all my music or even anything, everything, is perfect love conquers all fears. No matter what country, what territory, region I’m from, it doesn’t really matter. There’s no boundary.” 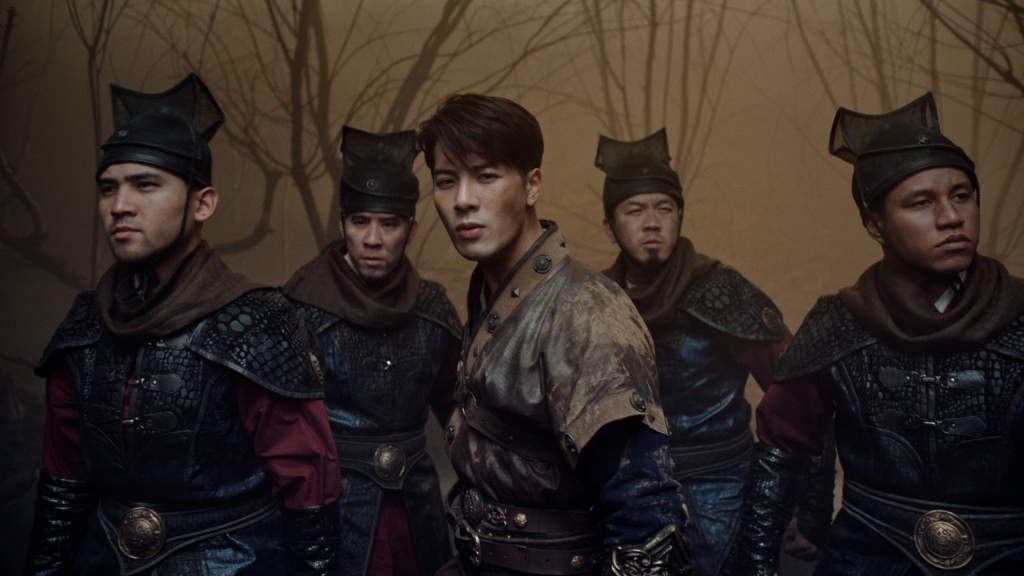 Jackson Wang (center) in a still from the new music video for “100 Ways.”  Courtesy

While balancing his role as a member of K-pop boy group Got7, who came onto the scene in 2014 under JYP Entertainment — the South Korean entertainment company and record label giant — Wang has also created his own path as a solo artist with the conglomerate since 2017 and his own management, Team Wang.

With wit and charm, he first caught the attention of the Asian public as a contestant on popular TV variety shows and then became a presenter, before focusing his time on his solo music career. Soon, he began endorsing a number of worldwide brands, from Pepsi to Fendi, becoming an ambassador for the Italian house in China early last year and releasing a capsule collection in collaboration with the brand. He even has a song titled “Fendiman,” an ode to the partnership.

“We’re looking forward to launch our official Team Wang brand,” he shared of future fashion endeavors. Like everything else, the project is momentarily on hold.

What has he been donning during the self-quarantine?

He paused to think. “It’s like, when it’s too cold and then you just wear [undergarments] inside your jeans and inside your shirt…I’ve been wearing that around the house, even when I sleep. And it has to be a turtleneck. Is that what you call it? Up to my neck to protect my throat. It makes me sound like a weirdo. Is that even normal?” He laughed it off.

A self-described workaholic (he spends half the year with Got7), having to stay in place has also been a break.

“I haven’t been resting, honestly, for four to five years,” he said. “I didn’t take any time off.

“Besides producing music, I get to think by myself a lot, reflect,” he continued. “And also, I get to think about my personal life, my family and my fans. To me, I just feel like I’m always trying to be a better person, a better artist. I feel like the best thing I can do is continue to make better product, better music and hopefully at this hard time, unfortunate time, my music can bring some joy to people.”

Hugo Vickers on the Monarch, the Mad Beauty and ‘The Crown’