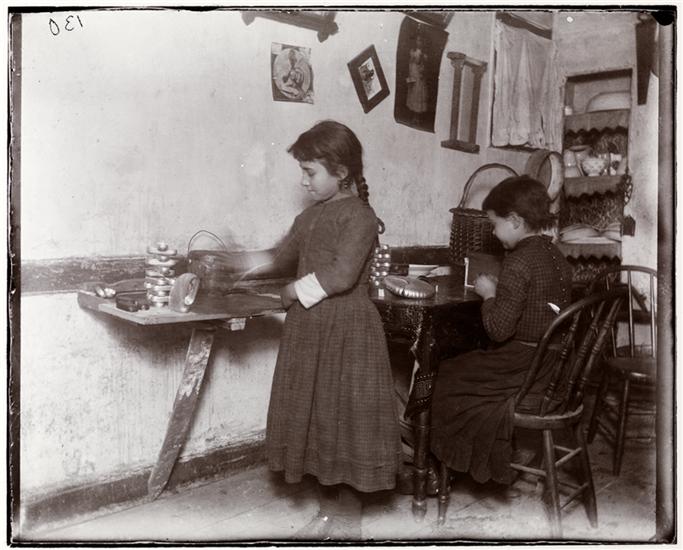 Social reformer Jacob A. Riis, born in Ribe, Denmark in 1849, is still a famous name, but those who recognize it often have misconceptions about him. His photographs are famous, but he didn’t consider himself a professional photographer; he said he was a “photographer after a fashion.” He didn’t even shoot some of the photos most closely associated with his name, and he never developed his own pictures.

Riis worked full-time as a journalist for 23 years, starting as a police reporter, and wrote 15 books. He also became a noted lecturer, spreading the word about conditions among the poor to middle- and upper-class audiences, using the then-novel medium of a magic-lantern slide show of his photos of back alleys and crowded rooms in tenements. These dark places were captured with the new technology of flash photography, which he and his assistants were among the first to use. Its original, dangerous incarnation involved tossing “flash powder” to illuminate a scene, and he set fires several times.

Now, at the Museum of the City of New York, guest curator Bonnie Yochelson has put together “Jacob A. Riis: Revealing New York’s Other Half,” the most comprehensive show about Riis in 50 years, a remarkable array of photographs, books, letters, account books and other material from his life. It’s a combination of photos from the City Museum — which has the Jacob A. Riis Collection of Photographs, the largest archive of his photos in the world — with the Jacob A. Riis Papers, which are at the Library of Congress and The New York Public Library. The show opens Wednesday and will be at the museum through March 20.

Although Riis’ father was a teacher, Jacob disliked school and trained as a carpenter. He fell in love with Elizabeth Gjortz, the adopted daughter of his carpenter employer, but the man was opposed to his courtship. At 20, Riis made his way to the U.S., where, for the first four years, he lived the life of the marginally employed. His fortunes began to change when he became a reporter for The New York Tribune.

He married his Danish sweetheart, and they moved to Richmond Hill, Long Island.

Riis’ first book, “How the Other Half Lives: Studies Among the Tenements of New York,” which was published by Charles Scribner’s Sons in 1890, became a national best-seller. So did his sixth, his autobiography, “The Making of an American,” published by Macmillan in 1901. He became friends with Theodore Roosevelt, then the police commissioner of New York, and took him on nighttime trips into the slums, offering suggestions about the reform of the police and health departments, both of which Roosevelt headed.

His second book, “Children of the Poor,” published in 1892, featured sympathetic portraits of said children, whom he had spoken to at length, but it was not a financial success.

Yochelson observes that “The Making of an American” was published in the same year as Booker T. Washington’s “Up From Slavery,” noting that both are narratives of uplift, a popular theme at the time. His magic-lantern shows, she says, featured big “reveals” of the horrifying conditions he had documented. There is a shortened video version of one of his lectures on show at the museum.

Riis strongly believed that, as he put it, “Children must grow up in decent homes,” and each lecture was, in effect, what Yochelson calls “a lay sermon, appealing to the Christian conscience to help others.” He advocated for housing, police and political reform, and continued to do so until his death in 1914.

Riis carefully catalogued many of his belongings, but he didn’t value his original photographs, and, in fact, he left them in a trunk in the attic of his house. It wasn’t until the mid-Forties that, with the prompting of the photographer Alexander Alland, his son Roger William Riis found a box in the attic with his father’s collection of negatives, lantern slides and prints. The ones that showed New York — most of them — were given by Roger William Riis to the City museum.