Original Oleg Cassini designs including handwritten feedback from Kennedy will be offered Tuesday at Doyle’s. 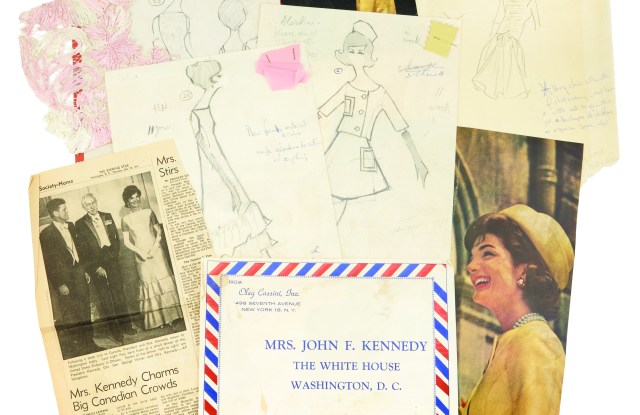 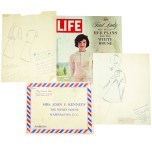 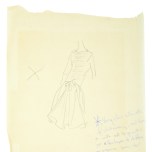 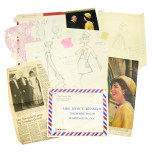 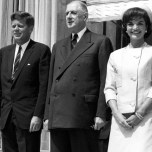 On Tuesday, a selection of fashion sketches done for Kennedy by artist Irwin Karabell for Cassini will be put up for auction at Doyle’s in New York. The rare archive includes original drawings by Karabell and Cassini as well as original fabric swatches and specific design notes from Kennedy.

“We have everything from small sketches on tracing paper all the way to larger, more finished color drawings on illustration boards,” explains Peter Costanzo, senior vice president of estate and appraisal services at Doyle’s. “Jackie would receive them, write on them and return them. She was very involved in the selection of fabric, cuts and the [overall] look.”

Kennedy’s handwritten feedback includes notes like “change to classic Givenchy top — see my Versailles dress,” “no mink” and “make sure skirt is not too slinky.” The First Lady wore some of these designs on state visits with President Kennedy to France and Canada and on the September 1961 cover of Life Magazine.

The sketches will be offered with other ephemera including newspaper clippings of Kennedy in Cassini’s designs collected by Karabell and an original red, white and blue box label addressed to “Mrs. John Kennedy” at The White House. “She would even do her own sketching,” adds Costanzo. “She really had a hand in it and wore these clothes with great poise.”

The lot, which is being sold in agreement between Karabell and Cassini Inc., boasts 13 drawings in total as well as a separate autographed note from Kennedy and is estimated to fetch between $10,000 and $15,000 at the Tuesday sale.

“It’s really worthy of institutional consideration,” notes Costanzo of these designs that typified “The Jackie Look” made famous during the Kennedy administration. “This is the type of archive that would really add to the scholarly archives of a collecting institution.”