The actor and director Gus Van Sant celebrated the opening of their show "Unfinished" at the Gagosian Gallery in Beverly Hills. 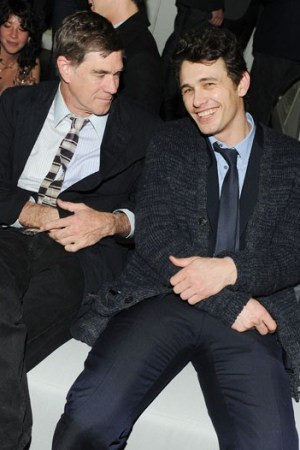 The stream of art-slash-Oscar parties continued on Friday night as jack-of-all-trades James Franco and director Gus Van Sant celebrated the opening of their show “Unfinished” at the Gagosian Gallery in Beverly Hills.

The duo took over half of the gallery and split it into two screening rooms for the films “Endless Idaho” and “My Own Private River,” which Franco had fashioned from dailies and other footage from Van Sant’s 1991 movie “My Own Private Idaho.”

“When we made ‘Milk’ Gus told me he still had all the old film he shot from the movie, and I was like, ‘This is a treasure chest.’ I had been obsessed with the original since I was in high school,” recalled Franco, who then convinced Gucci to sponsor the project, which involved digitizing hundreds of hours of film.

“So I had all this footage, like, in my computer,” said Franco. “It took me months to edit it.”

“I think he did a better job with it than I did,” the director said. For his part, Van Sant, who studied painting and cinema at Rhode Island School of Design, painted eight large scale watercolor portraits of young men who recall characters in “My Own Private Idaho.”

Franco’s parents Betsy and Doug were among those who arrived early.

“We don’t get to see him much otherwise,” said Doug.

Between being an Oscar nominee, co-host of the show, painter, performance artist, film editor, shot story author and video director (he’s set to direct two videos for Stipe, one of which will use footage his crew shot
over Oscar weekend) Franco joked, “Now there’s nothing I haven’t done. After this weekend I’m committing suicide.”