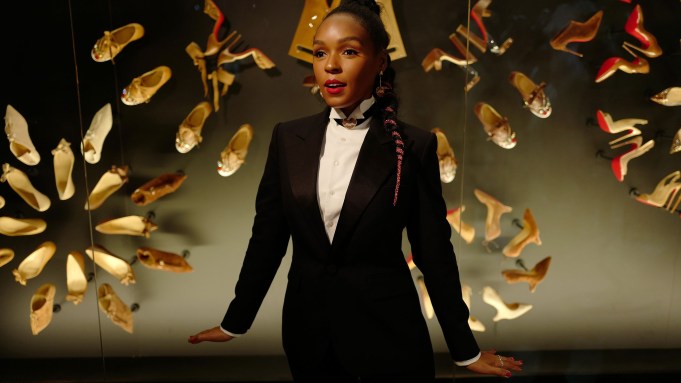 SHOES ON SHOW: Imagine your heel breaking just as you are walking down the street — disaster. Now imagine that happening on the red carpet at the Cannes Film Festival.

“I don’t know what happened, but the heel simply separated itself from my shoe,” remembered actress Anna Mouglalis, speaking at a cocktail celebrating Christian Louboutin’s “L’Exhibitionniste” exhibition in Paris on Monday evening. “I can’t remember how I did it, but I made it in the end.”

Dita Von Teese, Janelle Monáe and Karlie Kloss — all longtime friends of Louboutin’s — swooped in to the Palais de la Porte Dorée to greet the designer and took it in turns posing in front of the awe-inducing displays curated by Olivier Gabet, director of the Musée des Arts Décoratifs in Paris.

Actress Rossy de Palma was wearing a pair of Louboutin crystal-studded trainers. “These are perfect to walk round an exhibition,” she said, adding that she had devoted a whole scene in her 2017 one-woman show “Résilience d’Amour” to Louboutin shoes: in it, she tries to keep her balance in a pair of very high sparkly pumps.

Law Roach has had his share of shoe-related disaster stories.

“I think we’ve all had that situation where we may have worn a pair without breaking them in first and then had to tiptoe through the night,” laughed the stylist. “But shoes are just one of the things that completes an outfit: You can take something that you’ve had for years, and a new pair of shoes always kind of revitalizes the look and makes it special all over again.”

Roach, who counts Zendaya and Kerry Washington among his clients, is busy prepping outfits for the press tour for Denis Villeneuve’s “Dune,” an adaptation of Frank Herbert‘s classic science fiction novel.

“We’re excited for this press tour, because it’ll be Zendaya and Timothée Chalamet — I think the fashion kids are waiting for that one,” said the stylist.