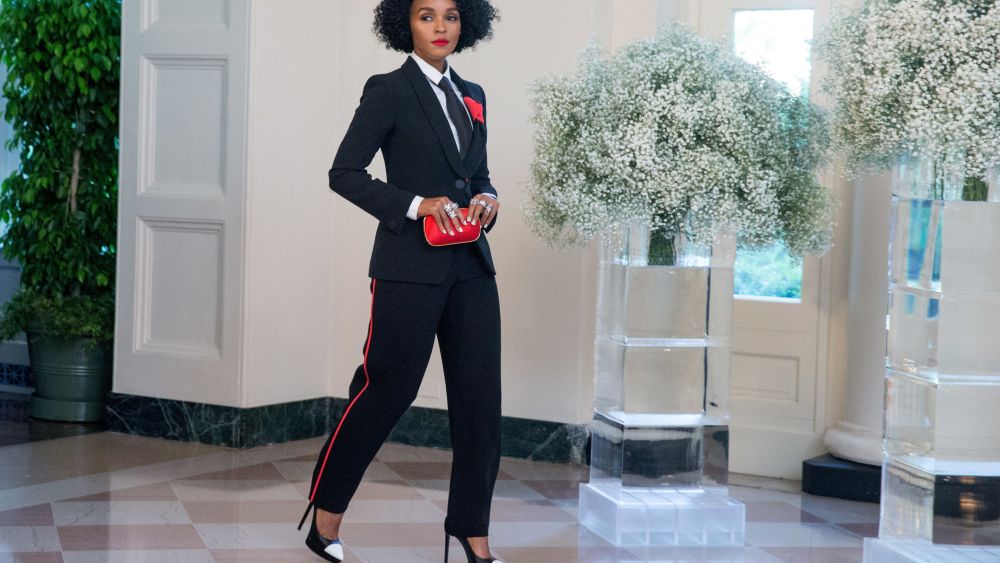 Singer Janelle Monae has already established herself on the stage, known for her high-energy performances, powerful voice and sharp black and white suits. This year she’s also emerged as an acting force to be reckoned with, breaking out in two of the season’s most praised films, “Moonlight” and “Hidden Figures.” She’s also logged a record number of red carpet appearances over the last 12 months, showing off style that’s evolved from androgynous to feminine. Her longtime stylist Maeve Reilly chatted with WWD about how she creates Monae’s many looks.

WWD: How did you and Janelle first begin working together?
Maeve Reilly: Three-and-a-half years ago someone at her record label reached out. They were in a pinch for a stylist for a music video, and it also happened to be the BET Awards. I think we had 12 racks of clothes and an entire kitchen island full of jewelry. We meshed well together. She’s never left in all these years and she’s gotten me on every big shoot that she’s done, from Pepsi to Cover Girl. The loyalty is beautiful and rare to find.

WWD: How do you and Janelle go about putting a look together?
M.R.: Janelle loves accessories. That’s always the most important thing. If you look at any photo of her, it’s usually something interesting or fun or playful. I think that came from her look being so conservative [originally]. The first few years we worked together she really only wore suiting, so it was her way of having fun with fashion and jewelry. Any photo you see of her, she has a diamond ring on every finger. I’ve literally found an earring and said, “We have to make this work.” Or she’ll be like, “I love this shoe. Let’s make it work.”

WWD: Where does Janelle’s black and white theme come from? Might she wear color in the future?
M.R.: There definitely will not be color. When Janelle entered the industry, she wanted to create a uniform based off of the working class family that she came from. She herself was a maid and had to wear a uniform. When she became a musician she started wearing tuxedos and black and white and that was her uniform. Obviously the tuxedo has evolved; she’s doing dresses and pants and skirts. The black and white, I think, will probably always stay the same. I love that about her and I would never want that to change.

WWD: How has her style evolved?
M.R.: For Janelle, it’s been a progression from the black and white suiting to popping in some red. The Met Gala, when she wore that long red cape, was probably my favorite look. As the years have gone on, she’s pushed it a little bit outside of her comfort zone. A lot of people ask me, “Was it a big conversation when she started wearing dresses?” It was the right event, the right moment. Then it became easier for me because it gives me more options. Preparing for all of the “Moonlight” and “Hidden Figures” press, we would say, “Does she stay musician Janelle or do we step into maybe a little more — not conservative — but more actress-y type looks?”

WWD: How’s award season treating you so far?
M.R.: We’re taking it day by day. The gown that she wore to Critics Choice was something we had for some time. It’s from this amazing African American woman based in Atlanta who Janelle actually knows. I’d been following her on Instagram and I saw that dress and I thought it could be a great moment for her. The Jenny Packham gown that she wore to Palm Springs was actually completely see-through—the white was woven panels and there was nothing underneath it on the runway. Jenny was able to send a black tulle skirt that we layered underneath the gown. Our dress for Globes is with a relationship we’ve had for a long time. It’s custom and it’s obviously black and white. And it’s a fun dress. That’s as much as I’m going to give.

WWD: Prior to this award season, what’s been your most meaningful moment on the job together?
M.R.: When we worked together on the Prince tribute for the BET Awards. He was her inspiration and her mentor and a really good friend. We custom-made everything. It was a long road and it was emotional. That’s what I love about my job: from the outside people could look at it as being rather vapid, but you get to create important moments in people’s lives. A lot of the time, I’m the last person that these people see before they step in front of millions of people. It can be my responsibility to be the light and the good energy that they see right before they go on stage.

WWD: Who did you work for before going out on your own?
M.R.: Rob Zangardi and Mariel Haenn, during Rihanna’s Rated-R era. And then I worked with April Roomet, who does a lot of the hip-hop guys. That’s how I fell into styling men. I worked with Russell Brand and Jamie Foxx for a long time. That’s kind of how I got hired with Janelle. She saw my work and was like, “Well, she knows how to do a suit, so she can do me too.”

WWD: What do you most enjoy about working with Hailey Baldwin and with Halsey?
M.R.: Hailey is a risk taker, but she’s gorgeous and everything looks good on her. I always joke that she’s like my Barbie doll. Her street style became an integral part of her brand. It’s such a different lane of the industry that didn’t exist five years ago. And Halsey is really dope. I see her as an edgy, badass, rock and roll chick. She and I took a big risk for AMAs and it really paid off. You have to stick with your gut and know that you’re making the right decision.