WWD goes inside the computer-generated pop star's New York concerts, which drew a combined audience of 7,000 this past weekend. 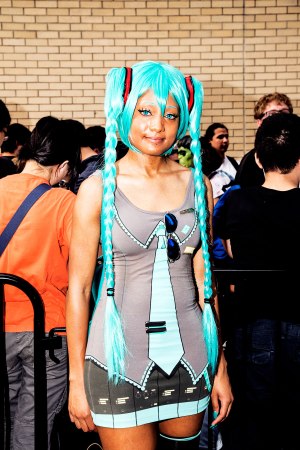 NEW YORK — At Hammerstein Ballroom on Saturday, the day’s headliner coquettishly shimmied across the stage — sending the audience into frenzied screams, their glow sticks raised in a unified sway. The performer’s buoyant teal pigtails, pleated miniskirt and coy lyrics drew amorous howls. But such entrancement wasn’t aimed at a human performer. Rather, the hysteria was directed at Hatsune Miku — a hologram pop star from Japan touring North America.

Miku’s only human quotient is the community of fans who conceive her. Her voice is computer-generated and her song catalogue is entirely the creation of everyday people — a phenomenon known as “vocaloid.” For about $200, aspiring producers can purchase software loaded with Hatsune Miku proprietary voices — the only method used to compose her songs. Should a track take off within Miku’s active Internet community, the song can become part of her onstage act. Miku’s albums are sold as compilations and credit the online username of each song’s creator as its track artist.

In addition to techies and futurists, Miku has spurred interest from the fashion world as well. In 2013, Marc Jacobs was named as the digital wardrobe designer for her virtual opera tour, “The End.” Jacobs clothed Miku in a monochromatic checkered outfit inspired by designs from his spring 2013 collection for Louis Vuitton. Earlier this month, Riccardo Tisci gave the vocaloid a sartorial makeover in his gothic haute couture.

While Miku’s persona — a 16-year-old school girl arbitrarily measuring just over 5 feet and weighing 93 pounds — is entirely made up, fans treat her with the same ardor they would a human act.

“I like the idea that it’s a hologram and a lot of people judge you for the fact that it’s not a real person — but I feel like that’s the coolest part. I’m a tech fan so I feel like I’m seeing what’s going to be new for the future,” said Eunice, an 18-year-old student from Flushing, Queens, who asked that her surname not be used.

“All the songs playing are made by normal people who bought the software and got famous online because they’re talented. For the most part you don’t know what they look like or who they are — anyone can do it. [Miku] is the manifestation of a whole community rather than just one person’s work,” she added.

Miku landed in New York on Saturday to play two sold-out shows that drew a combined audience of nearly 7,000. She was accompanied onstage by four professional musicians, who lend a rockish grit to what is otherwise a surreal experience. Like a human pop star, Miku’s saccharine radio edits take on a rawer edge when seen in the pixelated flesh.

In the hours before each show, fans queued for an entire block’s stretch of 34th Street, snaking well down Ninth Avenue. Most ranged in age from their mid-teens to early 30s, and wore Cosplay ensembles or outfits emulating early-Aughts Harajuku attire.

While Miku’s entire two-hour act is performed in Japanese without subtitles, the majority of fans surveyed by WWD didn’t speak the language, or had ever traveled to Japan. They sang along nonetheless.

Among them was Lily, an 18-year-old from New Jersey who coordinates social media for a medical marijuana firm. Dressed in neon pink platform boots and an iridescent biker jacket, she declared the Hatsune Miku phenomenon as, “Clap if you believe.

“We are all here to see her, but she doesn’t exist. The idea is to build a community around songs that are fan-made.”

Said fashion model and photograher Marcel Castenmiller, an avid Japanophile: “So many of these people, like myself, spend a lot of time inside playing video games and it’s good for them to get out and meet other people.”

The “expo,” as organizers call it, unfolded on a wide frosted screen mounted onstage. It also featured five of Miku’s lesser-known vocaloid counterparts — all owned by Sapporo, Japan-based firm Crypton Future Media. While watching the show, it was difficult to discern if the spectacle was a total gimmick or offered a visionary glimpse into the future-perfect.

A high-wattage projector glowed from behind the screen, delivering vocaloids onto the stage, and fading them away after each song. The holograms’ illusionary eyes are engineered to connect with those of each audience member, no matter their location in an arena — perhaps explaining their fans’  emotional attachment.

Many behaved as if a human was onstage. When Miku sat down at a “piano” to sing, the audience hushed itself in a sign of respect. When her fellow vocaloid Meiko took the stage and gyrated her derriere, the crowd erupted in shrill screams as if she were Shakira.

If vocaloids can become more widely proliferated, they could signal major financial gains for a struggling music industry. Miku’s virtual status alleviates many of the management and production headaches bestowed by human performers: costly riders, travel fees and tabloid fodder among them. Plus, it is feasible for the holograms to perform in multiple locations at the same time — maximizing tour income.

With her schoolgirl uniform, tartlet dance moves and pithy lyrics — one could easily draw parallels between Miku and Britney Spears.

Pete Berkman, guitarist and producer for Anamanaguchi — a Brooklyn band that has been on tour with Miku as her opening act for the past two months — said of vocaloids: “To make [music] programmatic makes a lot of sense because if you are in the studio with Britney Spears, she will probably record 100 or 200 takes of just one line that will be compiled together.

“Instead of spending all that time physically in a recording studio, saying, ‘No, do it like this,’ to get the pronunciation just so, that can be done now without spending human hours and stress. With Miku, a Britney Spears head-shaving moment would have to be programmed, instead of the natural byproduct of a psychosis that comes from trying to appeal to a lot of people.”

While Miku’s voice software has included an English-language database since 2013, the vocaloid medium has yet to take off among Western amateur producers. But according to Berkman — whose band just created an English song with the program, called “Miku” — that could soon change.

“Virtual programmatic things are only going to expand, unless there is some kind of rebellion where we break every machine in the world,” he said. “It might eventually flip to opposite, where it’s novel for an actual human to be singing onstage.”