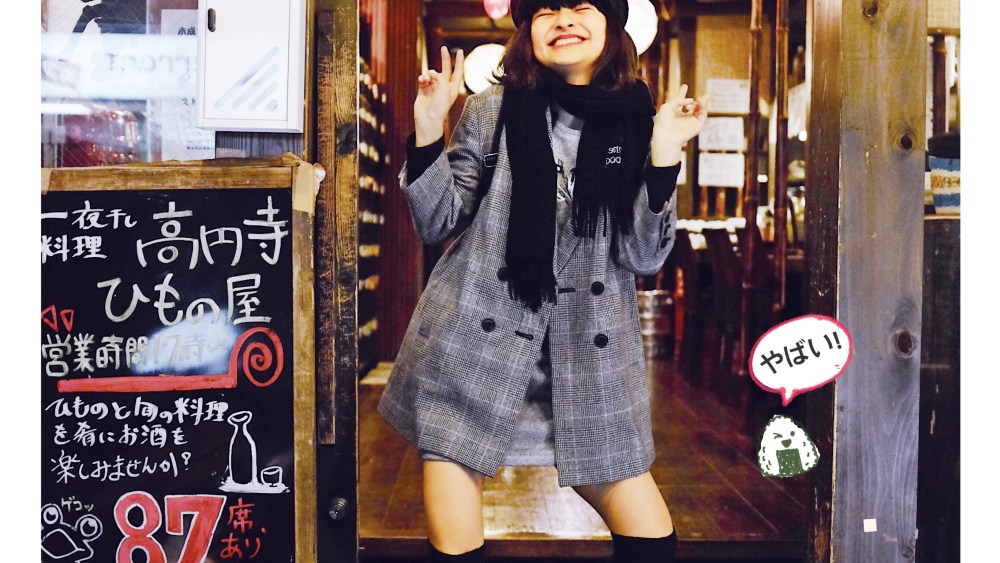 Skipping through the narrow, unevenly paved alleyways of the up-and-coming, grimy Tokyo neighborhood of Koenji is an elfish figure with a blunt bob and scarletted mouth, knee-socked feet tucked into platform oxfords so high that one would think her ankles might snap.

Passersby glance nonchalantly in recognition at this 14-year-old moppet known as Mappy — an Instagram starlet and jazz pianist whose finessed style has earned her more than 120,000 followers and a growing roster of corporate modeling contracts. This month, sources say she will be revealed as the spring face of Isetan — with 30-foot-tall posters of her likeness draped over the facade of its behemoth Shinjuku flagship.

The advertisements’ size is somewhat ironic given that they will eclipse the eighth-grader’s stature sixfold — her petite frame and singsongy voice give off the impression that she could very well sleep within a lacquered teacup. Mappy’s popular Instagram handle @BopMappy is a study in her contradictory taste in fashion and an idealized account of everyday teenage life in Tokyo’s outlying neighborhoods, ranging from weekend afternoon shopping jaunts in Harajuku to wholesome, cocktail-less dinners at cafés in Kichijoji.

At just 14, Mappy — a nickname that her mother gave her at age three (she declined to reveal her real name for privacy’s sake) — lives a life simultaneously spread across three extremes: middle school student, Instagram celebrity and music wunderkind.

Equally exhausting on their own, these subcategories’ tandem existence has given her a preternaturally wise perceptiveness. Mappy is self-aware enough to remedy when her wordliness begins to overwhelm her childlike spunk. Luckily, her optimism means these occasions happen infrequently, with her shenanigans on full view on her new Snapchat account where one can see her monkeying around in pet stores after school.

Her road to stardom began when she took up piano at age five. At 12, she was spotted on the street by influential style hunter site DropTokyo and her following snowballed. Despite her many engagements — like filming Android commercials and meeting with her manager at Sony Music Entertainment Japan — Mappy still practices the piano one to two hours a day after completing her homework, and more on weekends.

Last summer she and her mother Yuko — who chaperones her to each job, event and social engagement while holding a full-time job — traveled to New York, where Mappy enrolled in a summer music intensive course at New York Jazz Academy in Harlem. It’s there that she developed an appreciation for Thelonious Monk as well as pizza, the latter of which she muses about frequently.

Then there is middle school, which appears to be the most trying of all her obligations — and for reasons beyond her loathing of math and science. As a teen who showed signs of resolute individuality even as a small child, Mappy “has a hard time adapting to my schoolmates,” she admitted. She’s reserved among her female classmates, who she finds seek out her friendship for a chance at fame, and thus prefers to associate with her 23-year-old brother’s friends. “I don’t have a really close best friend for now,” she said.

In Japan, she said, “everybody grows up in the same way and I don’t like it.” In the first grade, she decided that she wanted to have her ears pierced — an adornment procedure that is relegated to one’s high school years. She went to the hospital with her mother in the fifth grade to have it done. “I like fashion and Americans get their ears pierced from the time they are a baby, I don’t like how Japanese people are too strict and telling me how to dress.”

When the school bell chimes, Mappy morphs out of her uniform — “the worst one in my neighborhood,” she said — and into a curious assortment of vintage. It’s this persona that has won her fans and she straps it on to shop at her favorite Harajuku shops such as Bubbles and Nadia Corazon (where she is constantly approached to take pictures with fans); to attend fashion week shows (where her attendance is heavily promoted by Mercedes-Benz organizers), and to fashion shoots with national magazines such as Vivi and Nylon. It’s this persona that’s also taking up an increasing amount of her time.

Stumbling into Family Mart, a convenience store chain or combini, she gazes at a magazine rack blanketed in covers featuring 25-year-old Kiko Mizuhara — another fashionable Instagram star who has since blown up to pose for everything from hairdryer companies to chocolate brands. Mappy rejects parallels drawn between herself and other public figures — particularly that of Tavi Gevinson. “I am me,” she said dismissively of articles that compare her to the Rookie magazine chief and former teen social media star.

Farther up the street, Mappy skips into an arcade and gasps at its selection of photobooths known as purikura. “This is my favorite,” she squeaks, loading herself, her mother, a reporter and three accompanying friends into the tented structure to pose for photos. A favorite pastime of Japanese teenagers, it’s no surprise that Mappy is a puri expert, wielding control of the booth’s post-photo decorating pen to stamp the auto-Photoshopped images with tiny fruit illustrations. She scrolls “Yabai,” the Japanese slangword for “sick,” in glittered English characters across one panorama.

The group journeys farther down the dori and climbs three floors of spindly stairs up to one of Mappy’s favorite vintage chains — Don Don Down on Wednesday, where an electic mix of used clothes are marked down each Wednesday. Though Mappy counts Jean Paul Gaultier, Thom Browne, Saint Laurent, Margiela and Alexander Wang among her favorite designers, “I cannot buy them because I’m a student. So I love vintage — I come here and try to find similar things with my mother.”

Mixed with her favorite style inspirations — Patti Smith, Fiona Apple and David Bowie — Mappy’s style amalgamation is vastly different than the sweeter inclinations of her peers, who look to Vivi’s contracted army of angelic models, not rock stars, as their fashion Svengalis.

She bounds out of the dressing room in shortalls, layered with a purple acid-wash T-shirt rimmed in orange marabou feathers underneath. A pink beanie is added to the mix. But with her mother’s help she settles on a simpler emerald dirndl skirt at checkout.

“I don’t think I look my best in something too sweet or cute. It doesn’t fit me,” she said.

The following week, Mappy and her mother are at Pepcafé Forest for dinner, a Thai restaurant situated inside Kichijoji’s Inokashira Park. She arrives in oversized JNCO-style jeans levered by suspenders, a Versus hoodie, minute backpack and mischievous grin — it’s Friday and school is out for the weekend.

Kichijoji, akin to New York’s Park Slope, is growing to be among the most desirable residential neighborhoods for young Tokyo families for of its greenery, ease of access and charming assortment of shops and restaurants. Mappy’s fame becomes much more acknowledged here than it was when she traipsed among Koenji’s starving, and more nocturnal, artists. The waitress scampers over to effuse, awkwardly, upon Mappy’s arrival and departure. The teen, who attributes her following to the fact that “people like me because I’m happy,” receives it graciously.

Mappy starts her irreverent trot again, swinging in circles across a pedestrian bridge that traverses Inokashira Park’s famous koi pond. Once back on the main street, a candy display outside the discount emporium Don Quijote catches her eye and she browses makeup. A duo of twentysomething’s gawk from the end of the aisle. “They know me,” Mappy said with full awareness, only becoming uncomfortable when their stares don’t relent.

Locating a restaurant in which to eat dessert with a teenager late on a Friday without a surrounding coterie of drunken salarymen proves challenging. Finally a dingy second-floor diner is found, offering a spring strawberry “festival” menu. Quivering with excitement (strawberries are a luxury in Japan), Mappy stuffs half of her berry-containing crepe into her mouth at once. Muffled by whipped cream, she talks about her goals. It’s music, not fashion, where she hopes to achieve the most success.

“I want to launch music worldwide, so I’m working to learn better English,” she said. “For now it feels a little tight [living in Japan] and I want to get to know more of the world.” At the end of this month she will make her first big music debut – playing the piano on Japanese jazz musician Thelma Aoyama’s forthcoming single, “Smile for Me.”

The clock strikes midnight, which in Tokyo means that one either needs to cut their social lives short to catch the last subway train or suck up to an incredulously expensive cab ride. Choosing the former, Mappy sets off sprinting through the streets in her platforms – wailing as her miniature, low-slinging backpack proves cumbersome in a quasi-athletic scenario.

She and her mother board the Chuo line, “I love you” she screams as the doors chime shut. It’s bedtime — tomorrow she’s scheduled for an early breakfast meeting.