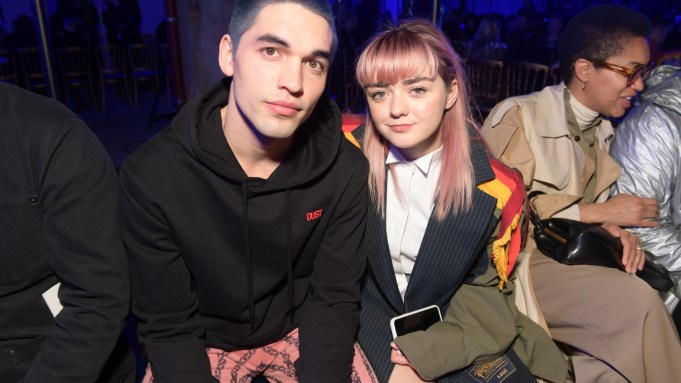 JAPAN CALLING: Actress Maisie Williams was easily identifiable in the sea of guests at the Sacai show on Monday.

“I love it, it’s a whole new me,” the “Game of Thrones” star said of her new bubblegum pink hair, wholly unconcerned about the impact her flashy hairstyle might have on future castings. (“I’ll cross that bridge when I get to it,” she shrugged.)

The British actress, who launched her own creative company last year and is working on the publication of her first magazine, is planning her third trip to Japan this year and looking forward to hitting the shops.

“I bought a beautiful Issey Miyake piece last time I was there,” she recalled. “I told myself it was cheaper there, but it wasn’t really.”

French model Constance Jablonski is also going to Japan this year, but for an altogether different reason: monkeys.

“I’m obsessed with monkeys, and for my birthday my boyfriend is taking me to these hot springs in the north of Japan, high up in the mountains, where loads of monkeys chill and take a bath,” the model said. “They just sit there with their little red faces. My aim in life is to go see monkeys in all their different countries.”

As Naomi Campbell was taking her seat alongside Colette founder Colette Roussaux and her daughter Sarah Andelman, jewelry designer Charlotte Chesnais spilled details about the pieces she created for Sacai’s fall 2019 collection.

“The starting point is always an item from my own collection, which Chitose [Abe] picks and then we transform together,” said the designer, who presented her own jewelry collection during Paris Fashion Week.

“The end piece that you’ll see on models during the show doesn’t have much to do with the initial earring: it’s like a cloud around the ear, you can’t really understand how it holds. Like an ear sculpture, in a way.”