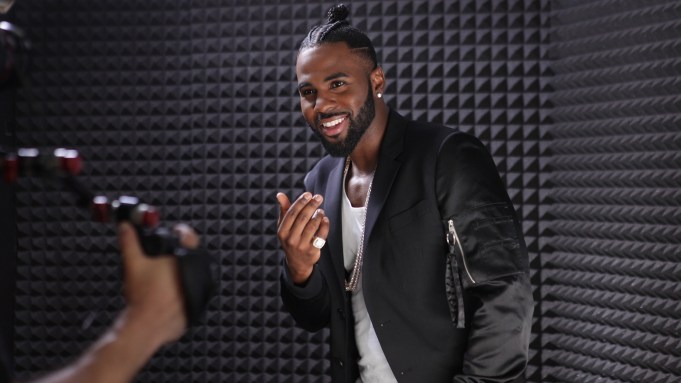 NEW YORK — Jason Derulo has a clear vision about how to define his own personal style and has turned to LVL XIII to bring that look to life.

The 26-year-old pop star, who has sold more than 50 million singles since launching his recording career in 2009, has invested personally in the luxury men’s streetwear collection, pronounced Level 13, and will be the face of the line when it relaunches in July during New York Fashion Week: Men’s.

During a shoot for the line here earlier this week, Derulo said he became a fan of LVL XIII when it debuted in 2013 and decided to take the relationship to the next level. His manager Frank Harris invested as well.

“I’ve always been a sneakerhead and I’m obsessed with footwear,” Derulo told WWD on the set of the shoot at Industria Superstudio which was hosted by LBCVMG, the branding and public relations agency spearheading the publicity for the line. “I was a fan of Antonio’s work and we put our heads together, had a conversation that was three to four hours long and we just clicked. Being a fan of the actual person is as important to me as somebody’s talent.”

Antonio is Antonio Brown, an Atlanta-based independent designer who created LVL XIII as an alternative to the luxury labels that are found everywhere around the world. The line launched with footwear and immediately found a celebrity following. But in 2013, Brown sued Louis Vuitton for trademark infringement and the production of the collection was put on hold. This lawsuit is in the final stages of summary judgment.

Derulo, who wore a tuxedo blazer/bomber hybrid capped off by black and white Aeilus shoes — and an eye-popping diamond-encrusted custom Rolex watch — for the first shot for the marketing campaign, said he has to “believe wholeheartedly” in something before he attaches his name to it. “I work hard to really mean something and everything attached to my name has to be at the highest level,” he said. And he thinks LVL XIII “can change a lot of things in fashion.”

Brown said that the 13 styles of LVL XIII shoes, which were created by Italian artisans, range from sandals to boots, and include mid and high-top luxury sneakers. The shoes have double outsoles in leather, which make them unique, Brown said.

“Jason’s stylist reached out to us for an appearance he was doing on ‘Good Morning America’ and said he wanted something different,” Brown said. “So we gave him some shoes and he destroyed them dancing. Then he came to us about collaborating on footwear and became an investing partner. He wants to be recognized for his fashion.”
Considering the fact that the line will include bright red and glittery gold Roman-inspired sneaks, Derulo’s feet will be hard to miss on stage. “Red is his favorite color and he also liked textured gold,” Brown said. “He has a textured gold backsplash in his bathroom at his home in L.A. He’s a big risk-taker.”

The launch will also include apparel that Brown described as a “transformative collection.” In the LVL XIII world, that translates into a bomber jacket that folds up into a backpack; a rain anorak in coated nylon with a removable hood and zip-up sleeves, and a see-through rain parka that transforms into a jacket.

The footwear will retail for $700 to $900 and the apparel will range from $200 to $500. The line will be sold on the company’s web site and Brown is talking to upscale retailers about also offering the collection.

Derulo, who worked on the design of the product with Brown and his team, describes his style as “young and fresh,” and said it has evolved over the years. He’s drawn to “amazing footwear” and “what’s hot in other places in Asia and Europe. It’s not just America and I’m looking for newness and freshness. I’m lucky that I’ve been able to travel the world and pull from all these cool brands. But from here on out, it’s LVL XIII.”

He’ll wear the brand during his stage appearances and he’s already practiced dancing in the shoes, he said, breaking into a bit of a moon-walk moment to prove his point. “That’s the first criteria,” he said.

In addition to his singing, Derulo has become known for his jaw-dropping gymnastic dance moves. While they’ve helped make him famous, those moves have also led to some near-fatal injuries, including a broken neck.

“Dancing is a gift and a curse,” he said. “Most dancers are pretty thin, but I don’t want to be super-slim. I’m a man and I want to look strong.” He said his workout routine includes weights and calisthenics, things he missed when the injury put him out of commission.

“I went crazy at the gym after the injury,” he said. “I was like a crazy man. When you can’t do something, it makes you want to do it even more.”

His exercise regime has obviously paid off and Derulo is not shy about taking his clothes off to show off his six-pack abs in his music videos, at photo shoots or for social media. But on this day, he remained fully clothed — the better to show off the collection.

Derulo plans to be involved in the launch of the line next month, which could include a concert tied into the presentation in New York, said Daniel Garriga, founding partner of LBCVMG, who added that final details are still being worked out. And Derulo will also promote the line to his 3.7 million Twitter and 2.6 million Instagram followers.

But while the singer may be focused on LVL XIII right now, he’s also eagerly awaiting the launch of his Platinum Hits album, due out in September. “There will be 11 songs that you know and love and two exclusive new singles,” he revealed.