The Roc Nation musician is blending Afrobeats with Drake-inspired rap and earning Anna Wintour's approval in the process. 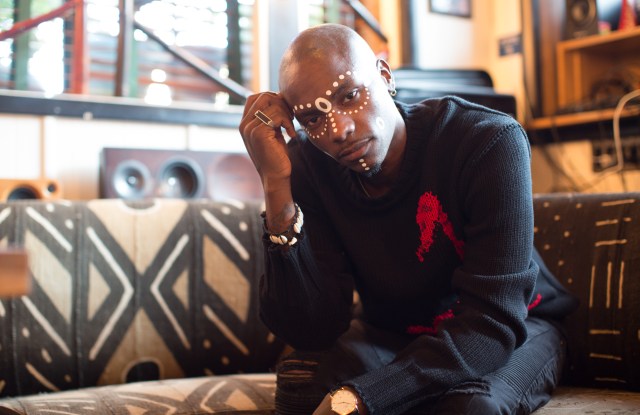 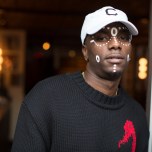 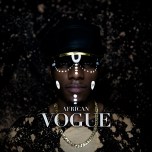 When Jay Z’s latest addition to the Roc Nation label Young Paris arrived with Gypsy Sport’s Rio Uribe on the red carpet at the November CFDA awards ceremony, he was promptly introduced to Anna Wintour — and earned a nod of approval. “We met at the red carpet. She doesn’t know who the hell I am, but she was like ‘wow,’” Paris recalls.

In addition to his Gypsy Sport outfit, Paris was wearing his signature white face paint, a family marking traditional in his Congolese culture. The immediate acceptance from the fashion community struck him. “It was my first fashion awards show to attend, and to get that response from a warming place, instead of ‘what is this?’ was beautiful,” he says.

Paris’ mix of American chart-topping rap with Congolese drumming is charming the music industry as well; after releasing his mixtape “African Vogue,” back in June, he was signed to Roc Nation as online excitement generated. The album was re-released Dec. 9, and if Paris has his way, this is only the beginning.

“Long story short, I grew up with a very strong performance and theatrical family — with 10 siblings, raised in my early years in Paris and then New York, and we’d go to Congo a lot,” he explains, from a corner table at Miss Lily’s in Manhattan’s SoHo on a recent afternoon. “My father cofounded the first national ballet in Congo, and my mother was a dancer in New York, and she was invited to dance for a company in Paris — I was born in Paris.”

His interest in music grew out of a desire to combine the sounds he heard as a kid in New York with those of his family in Congo. “I grew up being a young kid wearing my hat backwards and wearing those large shirts,” he recalls. “All the kids around me were rapping and I always wanted to put a swing on my music, so I added some additional background of Congolese drum into the background of my sound. A lot of the music has traditional African dialects but it’s very contemporary — so it’s kind of a mélange. It’s reiterating my background and trying to translate that into a contemporary sound.”

The updated take on Afrobeats music is a trend he predicts will accelerate in the coming year, citing everyone from Rihanna to Drake as recent examples of the combination’s growing popularity. “Even Justin Bieber is doing some Afrobeats stuff lately,” he says. “You’ll hear it a lot more next year and into the spring. I’ve been low-key, some serious songs are coming up.”

His sense of confidence caught the attention of Uribe, who brought Paris to the CFDAs and who he hopes to collaborate with during NYFW in February.

“My thing is, I’m a risk-taker,” Paris says. “What I would like to be known for with style, and for my career as well, is being able to take an interesting balance of masculinity and femininity — essentially, I’m an African man wearing paint on my face. And the thought of wearing makeup is obviously a very feminine thing. But the way that things are displayed and how they’re done kind of reshapes the norm of what people think of. Prince is a really good model for that. Everyone respects Prince, no matter how feminine his words. And I would say my words are very feminine, but I’ve also opened my mind to the shape of my body, and different pieces I can wear and feel comfortable in.”

He’s hoping his acceptance into large-scale American culture will follow in the steps of Wintour on that first red carpet. “For me, America is the most open-minded and the most close-minded country in the world at the same time,” he says.