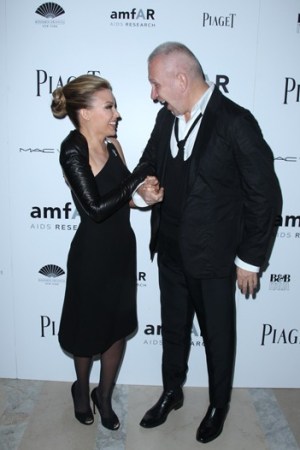 Gaultier and host Kylie Minogue applauded wildly during the men’s fashion show portion of the night, especially when Minogue’s main squeeze, model Andres Velencoso, took his turn on the catwalk.

(Onstage later, Gaultier referred to him as Minogue’s fiancé, but Velencoso’s agent had no comment on the alleged engagement.)

“I thought the boys did splendidly. Black leather always gets things off to a good start,” the pop singer said.

Which perhaps provoked Gaultier, during his acceptance speech for the amfAR Award of Inspiration, to add, “I regret not to have created the most beautiful outfit of the century, which is the one that protects. It is the condom.”

Ricky Martin, another honoree, awkwardly dedicated his own award to a pregnant teenager in Cambodia. During the auction that followed, Lorenzo Martone won a “musical date” with Minogue for $11,000, while Marc Jacobs laughed.

After that, Cyndi Lauper wowed the crowd with a blues song.

“I have a blues album coming out and I went to Memphis to record it,” she said. Kelly Rowland and Estelle then joined her onstage to perform “Girls Just Want to Have Fun.”