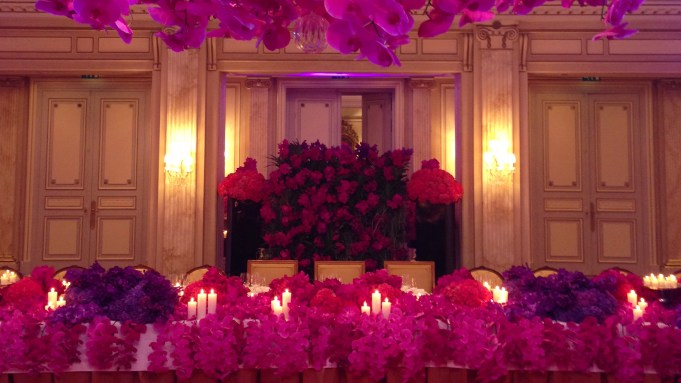 Things are looking rosy for Jeff Leatham. The florist has designed arrangements for luxury fashion brands, celebrity weddings and events, including a Bulgari and Elton John Foundation Oscars party in February. He’s also the artistic director of the Four Seasons Hotel George V in Paris and Four Seasons Hotel Los Angeles at Beverly Hills, where he creates elaborate flower displays. And — most recently — he announced his engagement to actor Colton Haynes, whom he showered with roses on Valentine’s Day. Needless to say, more flowers are in Leatham’s future.

Sending a bouquet to the high-end professional florist can seem daunting. “When I receive flowers it’s such a big deal because everyone usually says, ‘I’m so nervous to send you flowers,’ but for me, it could be like a bouquet of baby’s breath. If someone has the character enough to send me flowers, it’s so cool,” Leatham says. “Even with my partner [Haynes] now, he’s, like, ‘I’m always so nervous to give you flowers.’”

Leatham took on his L.A. post in summer 2016, which marks a full-circle arrival; he started his floral design career there in 1995.

“It’s kind of this great coming home type of situation, because the first time I ever touched a flower, started working with flowers, was here,” he says, adding that the hotel has allowed him creative freedom with florals, deviating from its signature lilies — recently he’s been captivated by Magnolias in L.A. Leatham also opened a shop in-house at Four Seasons in L.A. last year. “Being in Los Angeles and having my shop and being able to deliver my flowers to people on a personal basis, it’s great,” Leatham continues, adding that he returns to Paris for four or five days each month to create the grandiose displays at Hotel George V, where he goes through 13,000 flowers a week — tapping into a $1.4 million flower budget. “It’s great to have both [gigs] because in Paris, I’m kind of like a set designer, and we’re doing giant installations of thousands and thousands of flowers. And, here [in L.A.], it’s more of an emotional design that we do. I think the people who wouldn’t normally see my work in Paris are seeing my work in a different way here in Beverly Hills.”

In addition to his two hotel gigs, Leatham handles flowers for his celebrity clients, which include Kris Jenner and the broader Kardashian-Jenner clan. He likens his role to that of a personal shopper. “You really know exactly what your clients want and what their specifics are, because even with flowers now, people are getting so savvy and so particular — in a good way — about what flowers they like or they don’t like,” he says. “In the past six or seven years, the floral industry has exploded so much and there are so many talented florists that do so many different styles, whether it be very garden-y, or romantic, or cleaner-modern. Everyone has a way that they like their flowers designed. If you’re doing something for Kim and Kanye [West], everything has to be pure white, and no mixtures of blushes or creams.”

And for anyone looking to send Leatham flowers, simplicity is key.

“I always say to people, first: if you’re gonna start giving flowers, you should choose a beautiful vase. That way, you know if you’re going to send flowers to someone on a regular basis, that you know they have a beautiful vase to put the flowers in,” he explains. “The Leatham rule is: keep it clean, simple and chic. Never mix more than three varieties together, and never mix more than three colors together. And, if you stick with that three rule, then you can’t really go wrong sending flowers.”

And if you do manage to go wrong, then hey, it’s the gesture that counts.