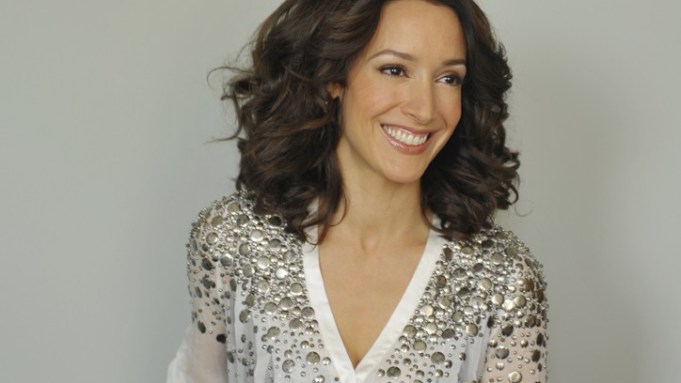 Jennifer Beals is unfailingly upbeat. Over the course of a 30-minute interview, the actress uses words like “fun,” “amazing” and “joyful” almost two dozen times.

Gary Oldman, who plays her villainous husband in the new film “The Book of Eli,” was “really a joy to be around.” Fighting with him on-screen was “really fun.” The project was “incredibly joyful” and “one of the most amazing experiences I’ve ever had.” Acting is “just so much fun it’s ridiculous.” Oh, and that time Denzel Washington got a little too into character and unexpectedly pulled a gun on her while shooting a pivotal “Book of Eli” scene? That was a “lovely surprise for both of us” and “more fun for all of us.”

Beals could outsell Newman’s Own with all the lemonade she makes.

Her positive descriptors are all the more notable considering that “The Book of Eli,” in theaters Friday, isn’t exactly a feel-good flick. Washington plays Eli, one of the sole survivors of a catastrophic war 30 years before, which has transformed the earth into a ruined wasteland. Armed with a slowly unfolding mission in this futuristic dystopia, he clashes with Carnegie (Oldman), a dictator overseeing a corrupt town. Beals is his long-suffering wife Claudia and mother to Solara (Mila Kunis).

“It’s a story that takes you through action and violence and dread to get to what is sweet and precious in the heart, which is hope,” says Beals of the film. “I loved the idea of playing this woman who was clearly flawed in her choices of men, but would do whatever it took to survive and to protect her daughter….I think Claudia is much stronger than I am, frankly. It’s probably one of the characters that’s furthest from me that I’ve ever played.”

Allen Hughes, who directed “Book of Eli” with his twin brother, Albert, would concur. When he was looking for actresses and her name came up, he was perplexed.

“I was like, Jennifer Beals? [But] there was something there that was afflicted and I couldn’t tell: ‘Is she acting or is she really like this?’” recalls Hughes, who wasn’t the only person on set struck by her intensity. “Denzel doesn’t compliment anybody,” he adds. “But at one point [when they were shooting a scene], Denzel grabbed my arm and goes, ‘Oh my God, I was watching her. I got lost!’”

Beals’ emotional intelligence has emerged over the course of a career that began in legwarmers — “Flashdance” came out when she was a student at Yale — and has since developed into something more enigmatic. Take some of her recent work: six seasons on Showtime’s cult hit “The L Word”; a bit part in the French comedy “Joueuse” with Kevin Kline, and a lead in the upcoming family film “The Night Before the Night Before Christmas.”

“It wasn’t a grand design. I’m not a very good architect of my career in that way,” says Beals, 46, who lives in Los Angeles with her husband and their young daughter. “I don’t need to be number one on the call sheet. I need to have a part that’s purposeful.”

She will soon begin shooting the dark indie “A Night for Dying Tigers” about a “criminally dysfunctional family” and just released “The L Word Book,” a photographic journal of her years on the show, the proceeds of which benefit a variety of charities.

“I’ve never dreamt of winning things or being famous or being at a certain point in my career,” says Beals. “I basically just do what I want.”