LONDON — In a city known for its buzzy young talent and short-lived fashion careers, Jenny Packham is a survivor.

She’s been in business for more than three decades, specializing in bridal and red carpet dressing with clients including the Duchess of Cambridge, Dita Von Teese, Kate Winslet, Phoebe Waller-Bridge and Adele.

She’s not a press darling here — she’s been around too long for that — but has a robust customer base in the U.K. the U.S. and China; a snazzy shop in London’s Mayfair and showed her latest fall/winter 2021 collection, filled with sparkle, feathery fluff and old Hollywood glamour, on the Paris schedule this week.

Packham has successfully weathered the COVID-19 storm which forced many fellow designer businesses to close, and has been working with China throughout lockdown. And she’s bracing for an influx of bridal and occasion-wear orders as life returns to some sort of normal.

Her survival skills are not solely professional, though, and her memoir, “How to Make a Dress” (Ebury Press), which is published on March 4, makes that clear. In it, she takes a frank and intimate look at fashion, family — and life — and is able to see herself, her work and those around her from a refreshingly ironic distance.

She talks openly about separating from her husband, business partner and father of her two grown-up daughters, Mathew Anderson, (they later reunite), and writes fantasy letters rebuking her detractors, including Alexandra Shulman, the former editor of British Vogue, and Prince Andrew.

She also lays bare how angry, and hurt, she was when a bus full of London Fashion Week journalists opted at the last minute to attend a Burberry after party instead of her show (which featured a techno band that she’d flown in from Berlin) leaving a glaringly empty front row.

“’Well, that was a f—ing disaster,’” she tells Anderson on the way home afterward. “’I’m never going to show (in London) again.’” Her husband replied by slamming his foot on the accelerator, “and we sped home in stony silence,” she writes.

Packham was serious, and she moved the show to New York six months later, picking up big department store clients, dressing red carpet celebrities and even getting name checked in “Gossip Girl,” with guest actress Elizabeth Hurley declaring, “I’m off to a Jenny Packham fashion show.” 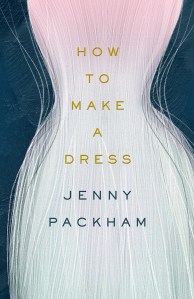 The book is also brimming with British self-deprecation, and the open acknowledgement of her own failings, fashion disasters and embarrassing celebrity moments, one in particular involving Leonardo DiCaprio.

Having asked to take a picture with him during a BAFTA tea party in Beverly Hills — she waits what seems like an eternity for an answer.

“As the slow seconds passed, I began to have that ‘Titanic’ feeling — I was sinking, into an abyss of shame,” she writes. DiCaprio finally agreed to pose, although Packham said she couldn’t bear to look at the photo for six months, she was so embarrassed by her starstruck behavior.

There have been some runway failures of her own making. Packham recalls being overly excited about a collection she did that was inspired by Sergei Diaghilev and the Ballets Russes.

A professional ballet dancer opened the show which featured a stellar lineup of models including Lily Cole, Jade Parfitt, Erin O’Connor and Yasmin Le Bon. Charlotte Tilbury and Eugene Souleiman, respectively, did the makeup and hair.

“The magical snowflakes began to fall and the principal dancer took to the stage, en pointe, weightless and sylphlike … As I looked toward the model lineup, I realized … this collection was really bad. Somehow the styles had just drifted off course. I shuddered; my fate was sealed and I felt a cold front coming in,” she writes.

There was more bad news to come. Packham rushed out to buy the newspapers the next morning, hoping the show had somehow been forgotten, “but as I scanned the lower shelves, I saw her on the front cover of The Mirror. Yasmin Le Bon wearing the crimson puffball (mini-gown) and the headline … ‘Does my Bon look big in this?’”

The book is also full of career highs, and a heartfelt look at the process of design. “For years I have held the components of my work in my hands and often inadvertently taken them home, waking up to find crystals and pins lying beside me in bed,” writes Packham.

She also loves a challenge, relishing the moment when the burlesque performer Von Teese enters Claridge’s in one of her complex, custom designs.

“I congratulate myself on fusing the Ming dynasty with film noir, and still managing to throw in a secret nod to the art of striptease,” writes Packham of Von Teese’s dress. “The cascading curtain of crystals shimmers against her back, sending a wave of excitement through the room, and I decide to take another sip of my cocktail.”

She writes fondly about her supportive, and inspirational, parents, and her older brother, the naturalist, TV presenter and author Chris Packham, whose ultra-organized closet she dissects, finding fleecy jackets, mountaineering gear — and lots of Prada.

Packham is softly spoken, a self-proclaimed introvert and doesn’t gush during interviews which is why the book is so revealing. In a video interview, she said the writing came naturally.

“As soon as I started, things came out — and I just ran with that. I think being authentic is the most important thing to me, actually. I thought ‘I’m just going to write it from my point of view’ how it is for me, my experience,” said the designer.

She wrote the book in 2019, on planes, in hotel rooms, at her local London café, “and even during work meetings — sometimes, I wouldn’t know what they were talking about,” she said with a smile.

Writing the book, she added, “invigorated my love of everything I’ve spent my life doing. I have an amazing job, and I feel really enthusiastic.”

Asked how her business has been able to thrive for so long in a city that can be so brutal for designers, she said having a niche product is key.

“Doing dresses for special occasions, there’s always been a place for that. The pandemic is probably giving us the biggest challenge ever because events have been postponed — but that’s the first time it’s happened in 33 years,” she said.

“I also think being international means that if the business is not doing well (in one region) you can sort of move around it. You’re not tied to one market. And I think that Mathew and I are very determined. He’s an excellent businessman, and we pull together and get things done.”

Packham has also been working closely with clients including Net-a-porter and Farfetch throughout lockdown, doing more exclusive capsules and mini-collections for them.

She said that business was hopping in the week before her Mayfair flagship was forced to close last November. “I think people are ordering forward for events that may or may not happen, and perhaps they’re treating themselves, too,” Packham said.

China, she added, has been thriving — she’s been dressing brides, VIPs and influencers from her shops in Beijing and Shanghai all through lockdown.

“It’s a slow burn with China, and I think you have to really prepare to invest, and know that it takes time for them to understand the brand,” said Packham, who’s looking to re-establish her presence in Russia, too.

Asked about the bridal business, she believes COVID-19 has taken it in a new direction.

“I’m really expecting quite a change in bridal fashion, because this year we see a number of girls getting married quite quickly. I think they’re still going to want the experience of coming into the shop and having their family there, but I think the emphasis on a wedding is going to change slightly,” Packham said.

“Being together with your friends and family is going to feel very special and I think, perhaps, the dresses might become slightly more fashion-orientated, because the emphasis will come off the dress a bit, and onto this very special thing of being with people. I think you might see some new sort of fashions coming out of it, like something a little bit more relaxed.

“As a designer, I feel I’ve got a bit more scope to sort of throw things in that may be a bit of a surprise, and I feel quite confident that they are going to be interested. I think there’s going to be a bit of letting go, and really living in the moment in bridal.”

Packham sees a bright, post-lockdown world. “I think it’s a very exciting time in the arts, because there will be an explosion of creativity, a desire to go off in a different direction. I feel quite sort of free as a designer because at the moment I feel I can be much more experimental, I think the customers are up for change, too, and to do something different.”