The artist's exhibition "Imperfect List" explores the interplay of sleep and capitalism in the New York cityscape.

Jesse Wine wants to know if you’ve seen the signs on the BQE.

“There’s a number of billboards that say — and they’re paid for by the government of New York City — ‘Billy Never Idles,'” he describes.

The campaign cautions drivers against idling their cars. It’s bad for the environment, not to mention noisy. Wine was particularly primed to notice the billboards: he’s been mulling the idea of a city that’s constantly idling. And he’s spent a lot of time listening to vehicular drone outside of his former Red Hook studio. “In one way or another, life never sleeps,” says the British artist.

His first U.S.-based museum show, “Imperfect List,” has opened at SculptureCenter in Long Island City following its spring pandemic postponement. In the interim, Wine has continued to produce work, and by doing so has discovered unexpected nuance within his large ceramic sculptures. 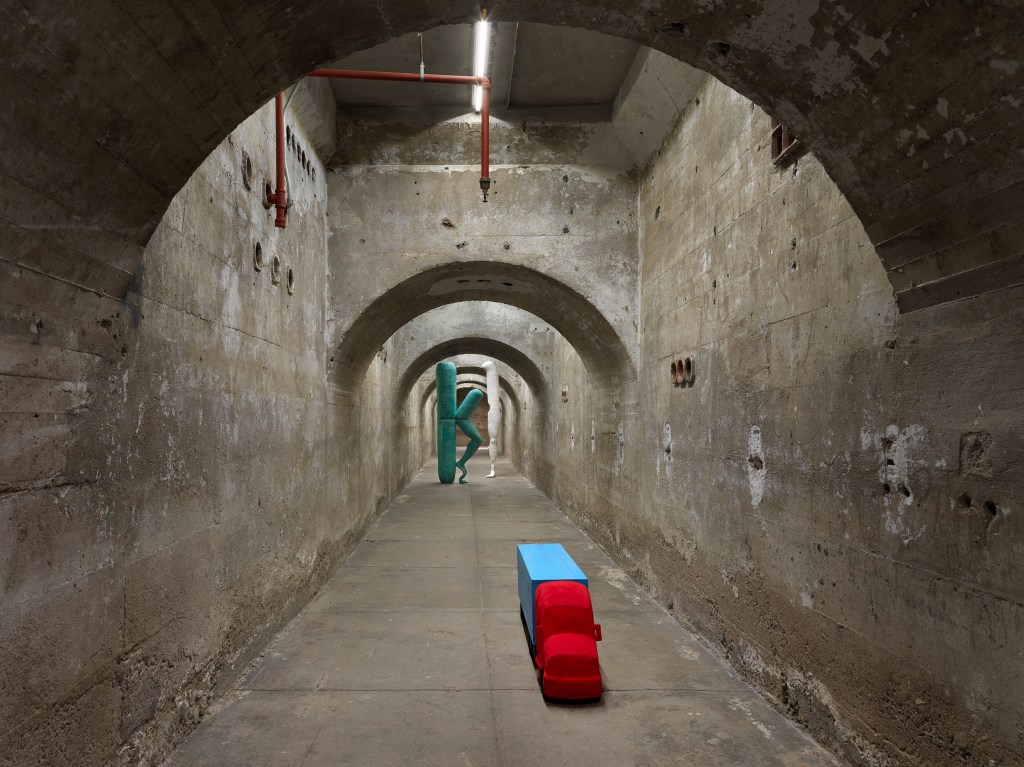 This idea first presented itself sonically outside of his old studio, located next to a holding area for large trucks. Drivers would rest and leave the trucks idling for hours at a time ahead of their long-haul departure. The trucks left idling reminded Wine of a computer in sleep mode — neither on nor off, but in an in-between state, ready to spring back into productivity at a moment’s notice. And within the unrelenting hum of the engines, Wine identified the sound of capitalism at work.

He discovered that the act of snitching had capitalist incentives, too: if you report someone for idling and they’re fined, you receive a percentage of the cost. “I didn’t report anyone, but I realized that I need to get this into my art in order to be able to psychologically tolerate the trucks being outside,” Wine says. (He’s also since moved his studio to Sunset Park.)

As the exhibition date drew closer, those big ideas around sleep, technology and capitalism became more abstract and Wine began seeing the works through a more personal lens. One sculpture in the show revealed itself as a self portrait: a sculpture of his mother’s house, where he was born, underneath the awning of two hands pressed together. The arm of those hands, and a kneeling leg, extend off an adjacent mattress. The piece gestures the start of a journey. 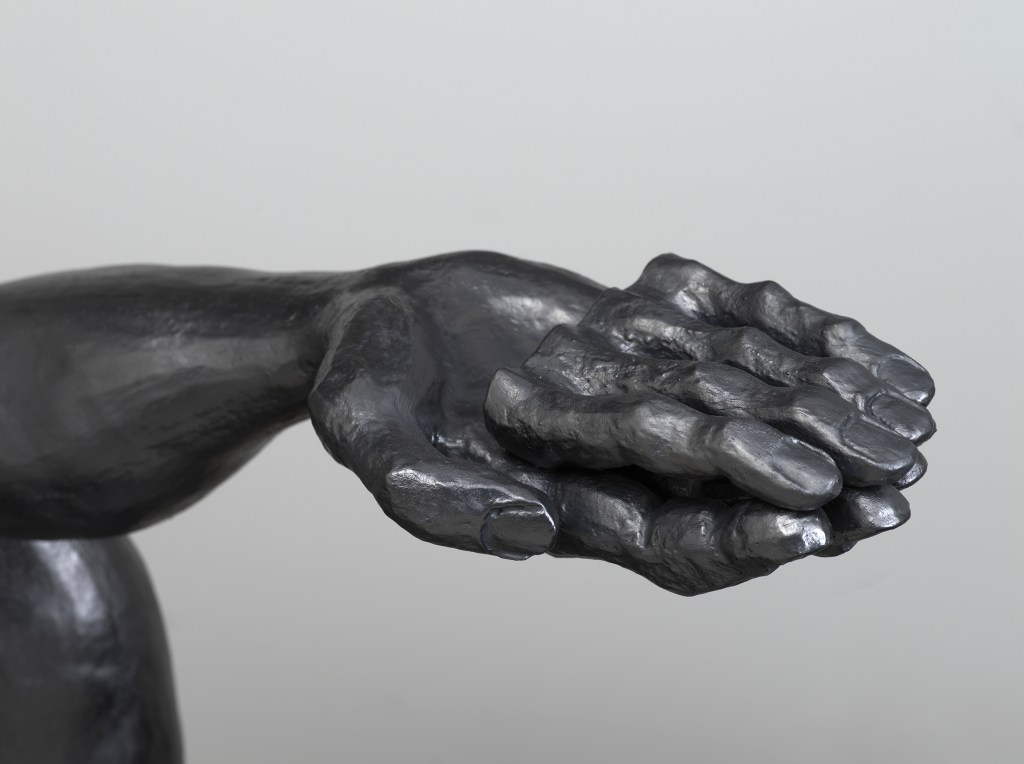 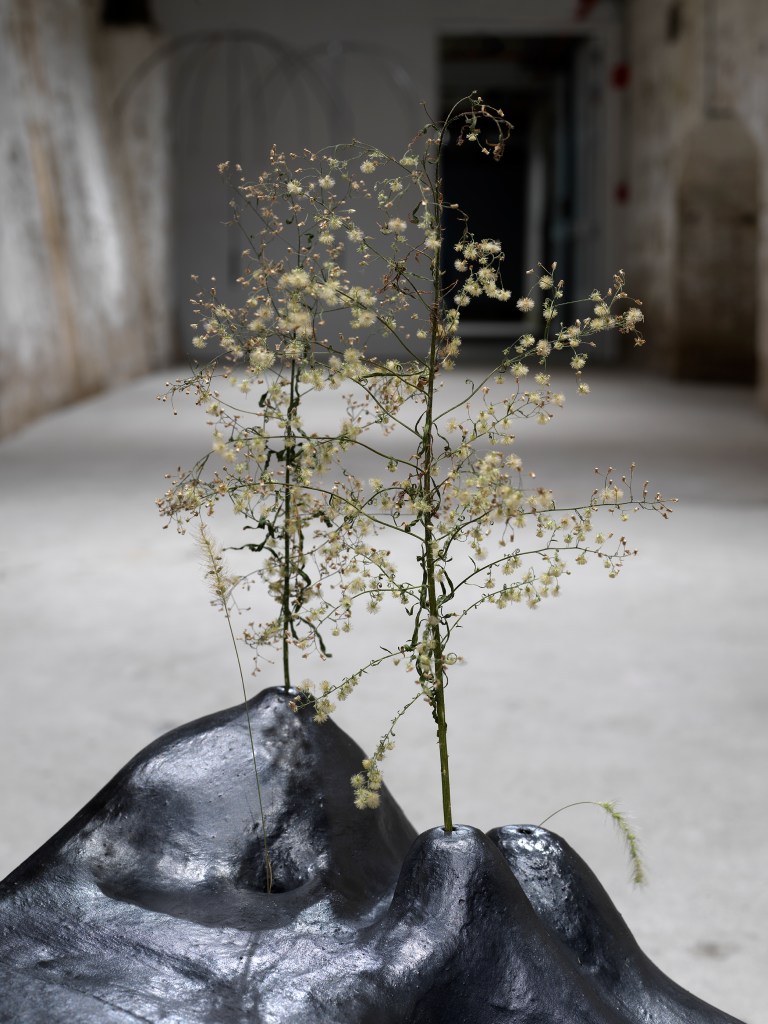 The piece incorporates a nonceramic element: flowers — weeds, really — which Wine picked from the overgrown garden outside the SculptureCenter. He added the botanical element to counter the stark, almost surreal, industrial setting of the SculptureCenter basement. The space reflects the brutalist aspect of the built city, and Wine’s sculptures also speak directly to the cityscape of New York. He imagines the city as a series of sculptures. While he doesn’t interact with the interior quality of buildings, it’s also an environment that is built and changed by the people who live within the city.

“The exhibition in its physical sense is really about being in New York and the drone of these trucks. And the way in which your sleep has been impressed upon by capitalism, and how you can’t get out of that rhythm,” he says. “The landscape that happens in is really important.” In direct reference to the inspiration hum of the trucks outside his studio, Wine manifested literal (albeit much smaller) idling trucks in the space’s long central corridor.

The title of the show, “Imperfect List,” is pulled from a late Eighties Scouse-accented spoken word piece by Big Hard Excellent Fish. The song lists out forces of offense: neighbors, lost keys, an ungrateful accusing mate, acid rain, a disloyal lover, cancer, hunger. Wine was intrigued by considering the relative strain of these forces in tandem. Later, the idea of coupling within the show emerged.

“If you’re single in a big city, you’re basically discriminated against,” he says, pointing to tax benefits and two-for train ticket specials as evidence. The exhibition’s sculptures are paired in duos, such as two dripping umbrellas (Wine describes the pieces as “lurgy,” perhaps the most direct reference to the pandemic.) 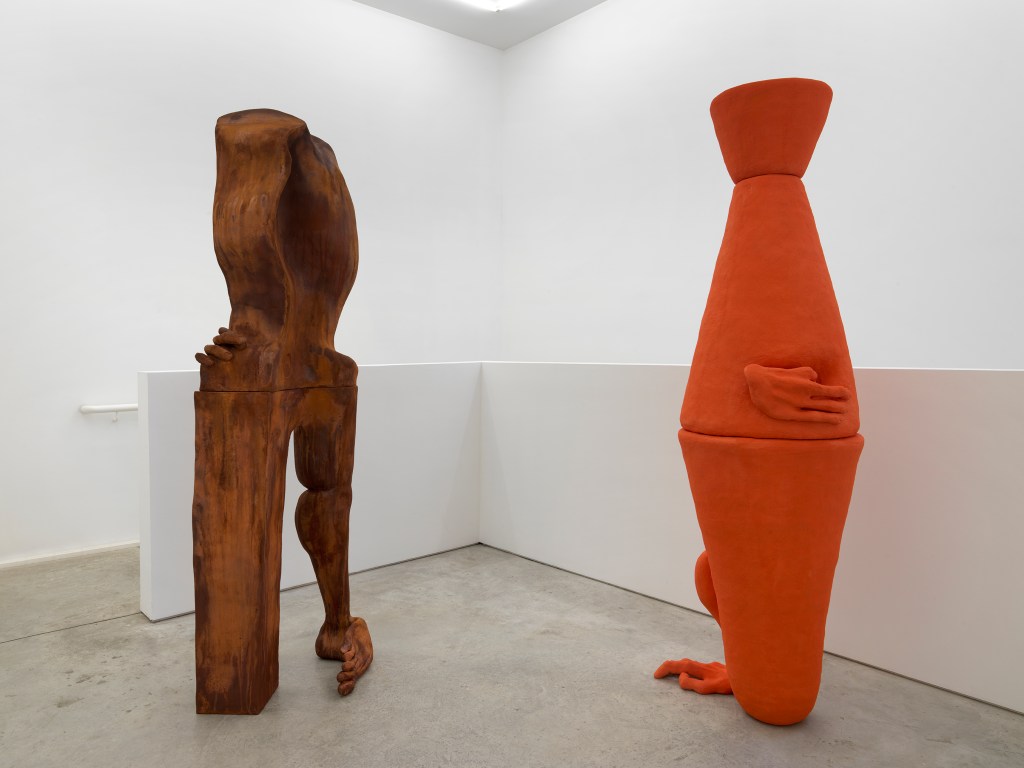 The artist relocated to New York from London several years ago, after meeting his wife while playing tennis in the Lower East Side. He works without an assistant, although his wife sometimes helps him load the sculptures into the kiln. “As soon as I have somebody else in the space, I lose concentration immediately,” he says.

While Wine works exclusively with ceramics (to fire each one, he essentially has to build his kiln around the sculptures), many are finished using metals, which he oxidizes. Copper turns surgical green, iron turns rusty. “Part of the beauty of it is that you lose control of it,” he says. He also likes that the finishes have a disorienting affect for the viewer as they try to parse out the unexpected composition of each piece: what looks metallic is in fact the more fragile ceramic.

The finishes also tap into an uncanniness: the oxidized copper draws reference to the Statue of Liberty, and Wine was interested in the idea that large built sculptures can serve as a signal when a visitor arrives to a new city.

“I know we don’t arrive by boat anymore. But when you arrive, this idea is communicated to you about what this place is and the kind of moral code that one should adopt in moving here,” he says. “And I just thought it was so beautiful, even if it is being completely thrown out right now.”

At SculptureCenter, he presents oxidized copper through a leg peeling itself away from the blank slate of a geometrical form: the start of another journey. 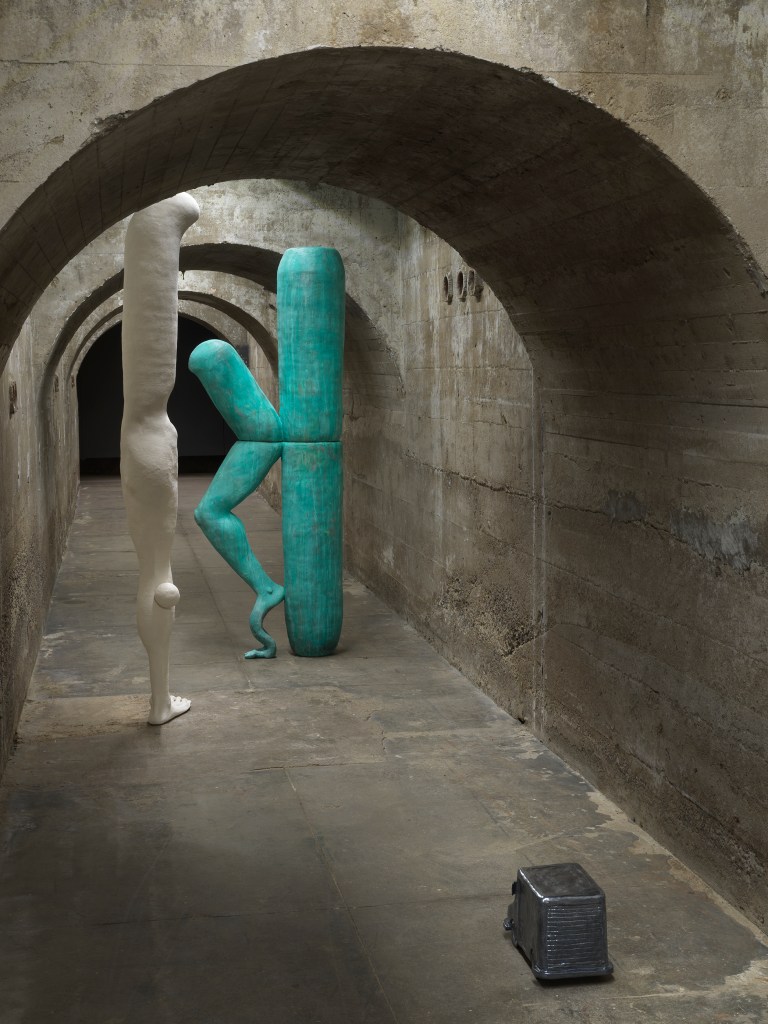