Despite 90 degree temps, the hostess gamely hopped on carnival rides with guests at the 4th annual Baby Buggy "Bedtime Bash." 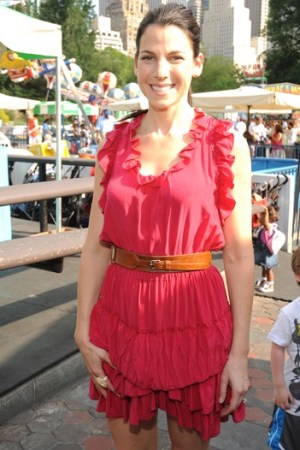 Though the mercury hovered close to 90 degrees and the humidity was stifling in Central Park’s Wollman Rink Thursday afternoon, Jessica Seinfeld managed to remain cool, calm and collected while hosting the 4th annual family-friendly “Bedtime Bash” for her charity, Baby Buggy.

Seinfeld gamely hopped on carnival rides with guests — many of whom hadn’t yet graduated from kindergarten — and chatted up the more senior attendees about her pet cause (all while keeping her Isabel Marant frock looking no worse for the wear despite the sweaty conditions). “I feel bad that New York City is such an unaffordable place for so many people,” said the hostess, whose organization provides impoverished city families with child care supplies. “It’s such an incredible place and should be a place where people don’t have to struggle so much.”

Not that Seinfeld is interested in allowing her three children — daughter Sascha, 9, and sons Julian, 7, and Shepherd, 4, with hubby Jerry — to stroll down easy street. “I definitely teach my children about rules, and I have no problem saying no. I think a little bit of struggle is good for children,” said Seinfeld, adding, “Jerry is much easier than I am.”